The Diocesan Delegation for Tangier Migrants is a church organisation that receives migrants in the north of Morocco. We paid them a visit.

The waters of the Atlantic Ocean encounter those of the Mediterranean off the coast of Tangier, the seventh-largest city in Morocco. We are travelling along a broad and quiet road accompanied by Sr. Immaculate Gala, a Carmelite of Charity of Vedruna and head of the Diocesan Delegation for Tangier Migrants (DDM).
Long before reaching the cathedral, we can see its white tower, smaller than the imposing minaret of the nearby mosque.
It was in this main church of the diocese of Tangier that the DDM took its first steps ten years ago on the initiative of the then bishop of the North African See Mons. Santiago Agrelo, to differentiate the aid given by the church to the local population through Caritas from the specific support given migrants. The DDM is still that secure space where the migrants are welcomed, listened to and can feel at home, as well as being a place where specific projects are carried out in response to the needs of the migrant population. 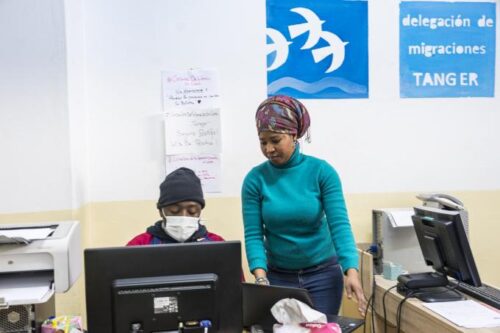 The DDM is open to all migrants without distinction. Those who wish to be accompanied spiritually are invited to speak with the priests of the seven parishes of the archdiocese.
” the services offered are not meant to substitute the rights guaranteed by the Moroccan state, whether as health or legal protection and we have close collaboration with the Moroccan organisations”, Sr. Immaculada tells us. In the four DDM centres – Tangier, Nador, Tetouan and Alhuceimas  – and in Oujda, even though it is not yet part of the structure of the Delegation, tens of thousands of migrants have benefitted from its services, “But the strength of this initiative does not lie in its numbers but in the concrete persons and the human response given to their needs”, Sr. Immaculada adds. The migrants who cross the north of Morocco form three categories according to their psychological state as they are about to make the crossing to Europe. The first is a state of anxiety in which one’s whole live is concentrated upon the crossing.  These people are given humanitarian aid to meet their immediate needs. The second group consists of people who, without losing sight of their desire to cross the sea, approach it more peacefully. For these, the DDM develops accompaniment, education and training-projects. The third group is composed of people who have abandoned the idea of going to Europe and want to settle in Morocco. These are supported while they are becoming inserted in the world of work.

Tangier. Ongoing dialogue.
At the headquarters of the DDM in Tangier, we met the dozens of people who make up the staff of the centre. Each morning, the work of the day is planned and requests from migrants are analysed. After the first general meeting, other more specific meetings are held with the leaders of each area in which it is decided who is to receive help, how it is to be given and who is to follow up each case. This is important since money is never given to them directly. For example, migrants are taken to the pharmacy, for medical check-ups or to the supermarket, or the rent of their accommodation is paid. Says Eric Parfait Foufou Talla, a Congolese and member of the team: “This method of being close to the migrants, in continual dialogue with them to get to know them, has changed a lot during the pandemic. Shops and offices have been closed for months, the laundry and showers have been closed and contact with migrants has been taking place by telephone. However, essential services such as food aid have been kept going”.

Tetouan. “Women’s Space”
Early in the morning, together with Sr. Immaculada, we travel the 56 km from Tangier to Tetouan, close to the Spanish city of Ceuta where the DDM centre is under the responsibility of the Franciscan fraternity. The Costarican Brother who coordinates the service assures us that “The Church is the essential reference-point for the Moroccan population through Caritas. However – the Franciscan continues – there is a noticeable reduction of Sub-Saharan immigrants because the authorities are exercising greater control over illegal migration; there have been raids and undocumented migrants have been arrested. Security measures have also been significantly increased along the Ceuta fences and it is almost impossible to cross them”. 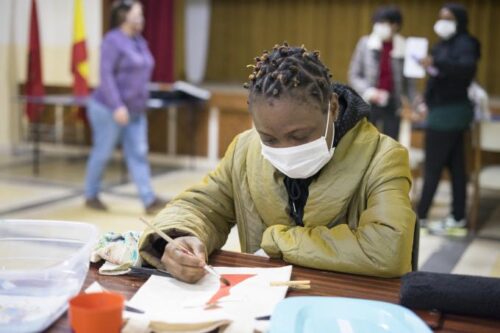 Last May, Ceuta has seen the arrival en masse of at least 8,000 people – including youths, women and children – in less than two days: Spain called out the army and has already sent back half of them. The crisis in Ceuta with less than 85,000 inhabitants is unprecedented. Never before has Spain had to cope with such a large number of migrants coming all at once into the territory after illegally crossing a border considered secure, especially on the Moroccan side.
In Tetouan there are plenty of rooms with a laundry and showers, Wi-Fi or recreational games where people can socialise, but they were closed during the pandemic and are only now tentatively starting to open and return to normal. In 2019, the DDM team launched the project ‘Women’s Space’, with workshops for sewing, painting and psychological counselling. “Some of these women became pregnant during the migratory journey in relationships that were not always wanted. By means of games, a massage workshop for children and other activities, we aimed to improve the emotional ties of the women with their children”, Brother Sergio informs us. The pandemic caused the project to be suspended but the Franciscan brother is determined to reactivate it. Besides welcoming, listening and giving humanitarian aid, the DDM in Tetouan collaborates with other organisations that accompany migrants who voluntarily agree to return to their own countries.

Nador. On the web
Following the coast road, we head for Nador, a city located close to the Spanish enclave of Melilla. We are welcomed to Nador by Fr Alvar Sánchez and he immediately invites us to visit the parish dedicated to St James the Greater, in the famous Spanish quarter of the city where the DDM centre is housed. Rarely has any parish space been so well used. Here we find the Baraka training centre, a sewing school for women, a hostel for migrants, meeting rooms and offices, together with a dining room for children and storerooms.  Together with Fr Sánchez there are about 25 humanitarian and social workers who keep the many activities of the DDM going. 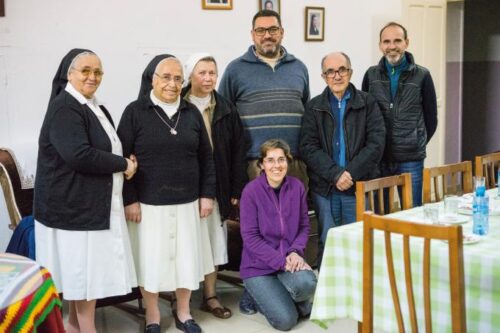 Fathers and sisters working with migrants in Nador

Here, the situation of the migrants is different from those in Tangier. It is a transit zone, close to the border and it is difficult to rent accommodation. A house was needed for convalescent migrants, women and children as well as a number of rooms where people could stay. However, most of the migrants live in the countryside or the ghettos around the city.  A team was set up composed of immigrants who meet regularly to look into the needs of the migrant population; the DDM representatives also visit these places frequently.
Using the RefAid app, the Nador team has also developed a digital platform that collects data from more than 300 organizations in Spain and Morocco that offer help to migrants and can be contacted by mobile phone. The app is available in English, French, Arabic and Spanish. A further innovative project is the ‘West African Flyway’, started in 2018 in Guinea. In collaboration with other organisations present in the country, participated awareness sessions are promoted to inform and protect especially the youth, against the dangers of illegal immigration and protect them from trafficking networks. This project has been successfully implemented in Senegal.

Oujda. An oasis of reflection
The majority of illegal migrants enter Morocco across the Algerian border. In the Catholic parish of San Luis, there is an oasis of reflection and rest for them which was opened by Franciscan priest Antoine Exelmans. At present, an average of 100 immigrants pass through each month. Some make an emergency stop there, halting for a few nights before continuing on their way; others arrive sick or seriously wounded and these stay for longer. One wing of the building is reserved for a project with minors who are accompanied and are given basic training in the Moroccan centres. Collaborating with Fr Exelmans are Sr María Ros Castello and Sr Montserrat Prats, from Spain, together with the French Sr Rachel Guillien, Consolata Sr Edwin Osaleh from Kenya, and some volunteers.
Sr. Montserrat Prats emphasises that “The purpose of the house is to create a peaceful space where immigrants can reflect on their plans for their future lives”, and Sr Maria Ros adds: “Some of them, after being here for a while, decide to return to their original countries, something that requires psychological preparation since they see this as a failure they have to face, they have to prepare their families. Others decide to get an education or a profession”.