The Limpopo River Basin is a fragile environment threatened by the combined pressure, of climate change, urban waste disposal and mining activities.

The sluggish waters of the Limpopo, called Espiritu Santo River by the Portuguese explorer Vasco da Gama in 1498 and much later the “great grey-green, greasy Limpopo» by Rudyard Kipling, flow from South Africa through Botswana, Zimbabwe to the Indian Ocean in Mozambique
The 1,750 km long River is the main source of life for the 15 million people who live in its 415,000 square kilometres basin. But at the same time this precious ethics asset is fragile. Indeed the Limpopo River has a quite modest mean discharge of 170 cubic meters/second. Rainfall is seasonal and unreliable. In dry years, the upper parts of the river, flow for 40 days only or even less, especially in the arid upper part of the drainage basin, in the Kalahari Desert.  But during the rainy season, terrible disasters may occur as well as that was the case in February 2000 when heavy rainfalls, due to a cyclone, caused catastrophic
floods in Mozambique. 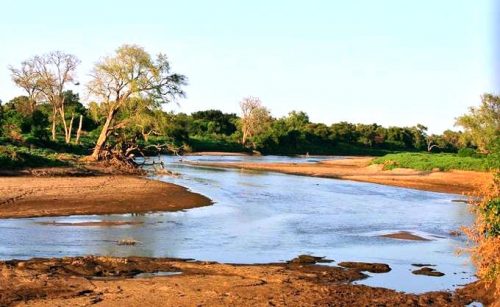 Model projections by the University of Zululand suggest a down trend of the flow as drying is projected across the basin. Other sources also estimate that the present water scarcity is likely to be exacerbated in the future by climate change and that this will pose a problem of water allocation between different users ranging from irrigated agriculture to mining. Today, the use of water irrigation is dominant. But this will change by 2025, with climate change making water scarcer, anticipate climatologists. The situation is critical for some time: water demand exceeded scarcity in 2000 and in 2005, the main tributary of the Limpopo, the Olifants River ran dry. This fragility is expected to have serious consequences on the exceptionally rich biodiversity of the basin  In the North-Eastern corner of South Africa the river borders indeed the Kruger National Park. 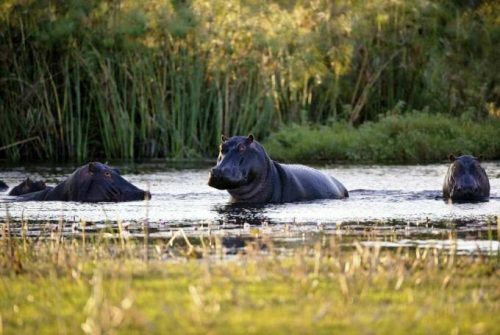 Between the Mokolo and the Mogalakwena Rivers, high concentrations of hippopotamus are found.  Zambezi sharks or bull sharks which tolerate fresh water, are often spotted in the lower parts of the river in Mozambique. Crocodiles are also common. It is no coincidence that one of the main tributaries of the Limpopo was named the Crocodile river. The destruction of mangroves in the estuary is also a matter of concern, since the livelihoods of many rural people there depend on the ecosystem goods and services. Mangroves provide indeed fish crabs and firewood to the local people. For this reason, the United States Agency for International Development (US AID) partnered with the Centre for the Sustainable Use of Coastal Zones in Mozambique to work with the local communities in Xai-Xai, in order to replant and rehabilitate mangrove vegetation in the river estuary.
Land degradation and pollution from pesticides and nutrients from the agro-industry are posing increasing threats to the wildlife. 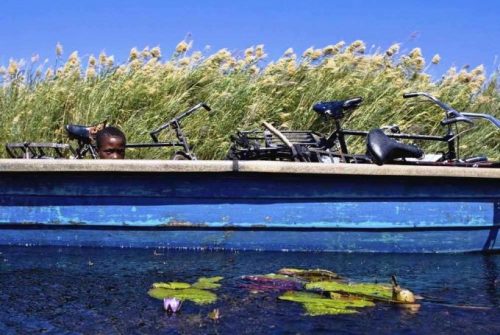 Water is contaminated with bacteria and algae. But one of the main causes of pollution is the mining activity which is intense in the river basin with a total of about 1 900 mines in the basin. In 2010, mining activities accounted for 10 percent of water use but by 2025 mining activity is expected to grow by 30% and energy by 26 %, adding to the pressure from rapid urban growth and energy projects on the basin’s water resources. A 45% increase of water demand by 2025 is indeed projected.The pressure will also increase particularly in Mozambique, where recent discoveries of large deposits of coal and natural gas will impact future water requirements. There is already much need of more regulation. In South Africa, 125 mines were operating without a water license revealed a South African parliament investigation in 2010. Along the river, particularly in South Africa and Botswana, sand mines for construction purposes are degrading local environments, which is leading to riparian degradation, including wetland destruction, bank erosion and increases water turbidity.  In 2014, the Bosveld Phosphates Company had to pay a Rand 2.55‑million fine after local inhabitants managed to prove that it had polluted a tributary to the Olifants River, in the Limpopo River Basin. The spill polluted waters which irrigate farming land in western Mpumalanga and killed hundreds of crocodiles and fish in the Kruger Park. 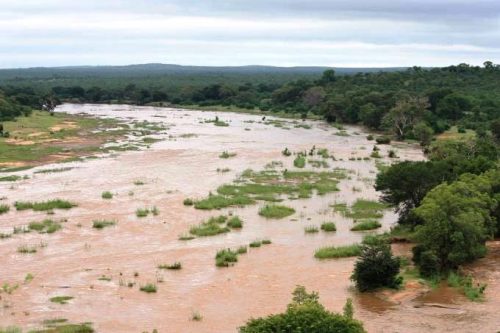 According to the south African newspaper Mail and Guardian, Sasol’s petrochemical complex at Secunda and Eskom’s power stations along with the mines that supply them Eskom — are adding doses of pollution to the river.  Tests from the University of Venda showed elevated levels of metals and other pollutants in fish and showed  that tiger fish in the Olifants were half the size they would have been if they were healthy. High levels of pollution acid drainage from old mines from Mpumalanga Highveld effluent are also reported by other sources.
Data on water quality in the Olifants River, collected in the Kruger National Park by Venda and Rhodes universities researchers also point to a threat which is worse than mining. Accordingly, the more dangerous pollution comes rom wastes emanating from municipal wastewater treatment plants. The result is appalling: South Africa’s water and sanitation department, lists most of the plants along the Olifants River as being in a poor or “critical” state.
Finally, the presence of all the coal power stations along the river and the construction of the huge 4,800 MW thermal Medupi power station in Mpumalanga is raising much concern among the local farmers. They fear that these projects will pump large quantities of water from the Crocodile River tributary which feeds the Limpopo. Engineers from the South African electricity corporation ESKOM claim that the Medupi thermal power station will be using a dry cooling technology which saves water, unlike older generation power stations which use vast amounts of water to cool their systems. But the farmers point out that the mining capacity needed to feed the huge Medupi power station will induce a considerable pressure on the water resources anyway. The consumption of water by the coal mining industry to reduce the hazards of fires and explosions and to manage the dust produced during the processing state, is very high indeed. It is estimated that it amounts to 250 litres per ton of coal.