The animal symbolic of the African savannah is known all over the world for its strength and is feared and admired for its majesty. Less known are the laws governing its strict social life.
Threats to its future. Discovering the sophisticated society of the largest feline in Africa

Its roar breaks the silence of the African bush. It causes the very air to tremble, pierces the heart, and commands reverential fear. It is the call of the largest African feline, the lion. It is a powerful sound that grows in intensity and is audible up to five miles away; it is repeated several times and followed by a series of rumblings and guttural sounds. 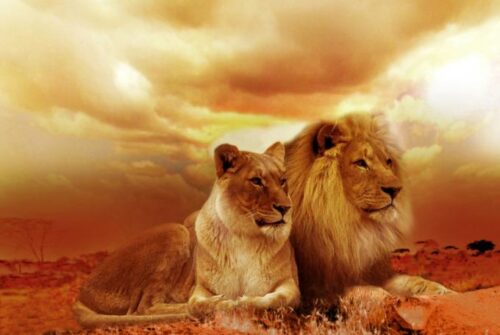 The roar has well-defined functions: it affirms the presence of the male and his territorial status and allows each of his kind to communicate their position to other members of the pride; it strengthens family and social ties; and the latter is an anomaly in the world of the cats.

A social animal
The felines are a family of carnivores and almost all felines conduct a solitary life. After mating, they return to their solitary existence. In a few cases, such as that of the cheetah, they form small coalitions of males and live a gregarious life.
This is what happens with almost all the felines, with one exception: that of the lion. The lion is the only social feline, organised in prides that usually number from three to a dozen individuals though, in exceptional cases, they may number even more than thirty.

Extended family
After a long night punctuated by roars, lions may be found on the riverbanks or stretched out on the sand under a tree to rest after hours of hunting. What first strikes the eye is the prevalence of lionesses with a small number of males (often just a single individual), a characteristic that reveals something very important. Lion society is matriarchal, and the heart of the pride is nothing less than an extended family of lionesses all of which are bound by unbreakable blood ties. 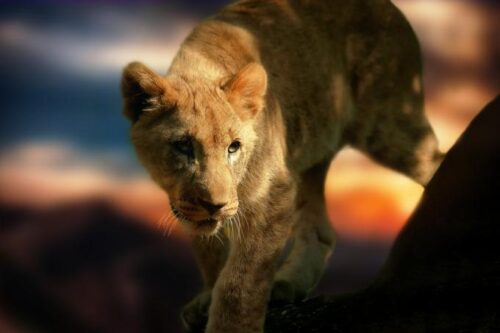 The male lions, instead, are not permanent; they are temporary figures but no less important for that, whose contribution is almost exclusively genetic as fathers of new generations of cubs. The male does not stay long in the pride; his stay usually begins with victory in a bloody encounter with the previous resident male which is thereby ousted and dismissed.  The new male must then fulfil his main duty, that of fecundating the females and so give rise to a new generation of lions that will hand down his genes.
And from where do the rival lions come that every male must always be prepared to confront?
At three years of age, the males abandon the pride, urged also by the increasing intolerance towards sexually mature individuals on the part of the adult males. The young males begin a life of solitary wandering or may join together in groups of two or three, forming coalitions (as cheetahs do). As they wander, they invade the territory of other males where they may stay for long periods as ‘squatters’, prudently avoiding the resident male by observing the numerous olfactory signs he leaves along the path of his prolonged patrols, the purpose of which is probably to show his whereabouts rather than to mark his territory. 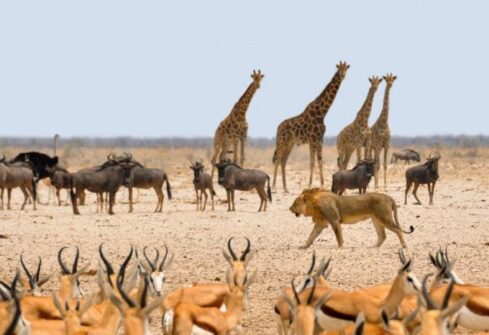 When the vagabonds feel they are strong enough (and the coalition notably increases its strength), they challenge the resident male. If they win, they become the new resident males.
Their new status gives them access to the females but, while in the case of single male, this right is easily exercised.
What happens in a coalition where there are competing males? In this case, too, nature has solved the problem: among lions, access to females follows no hierarchical priority but all the males have indiscriminate access to the females, also due to the large number of lionesses.

Allied mothers
The males patrol and defend their territory, sometimes taking part in the hunt, but all their activities are geared towards a single end: handing down their genes. Therefore, to say that they defend the pride against rival males is not entirely correct since they simply defend their own status and offspring. 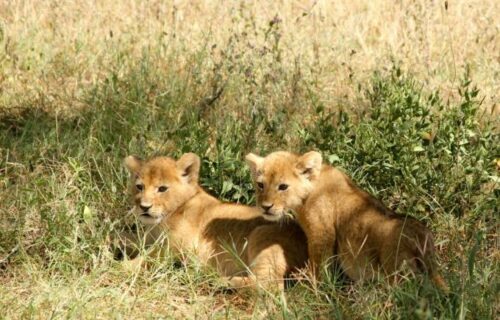 The complex strategies for reproduction are not, however, the exclusive prerogative of the males. The phenomenon of the synchronisation of the oestrous cycle is well known; the lionesses of the same pride come into heat more or less contemporaneously. This guarantees that they give birth at the same time which helps the mothers to conserve their energy during lactation and while rearing their cubs, an activity which, in the matriarchal society of lions, is carried out in total mutual collaboration.
All the females nurse and protect their own cubs, and those of other mothers without distinction, which allows the females to take their turn hunting without leaving their cubs by themselves.

Danger of extinction
While all cats that live a solitary life are happy with prey of small or modest dimensions, lions, whose strength lies in their numbers (apart from their size), may kill larger prey, usually more than twice as heavy as the predator and even reaching a ton weight in some cases. But despite its fame as an invincible animal, the king of the savannah is increasingly threatened by man. 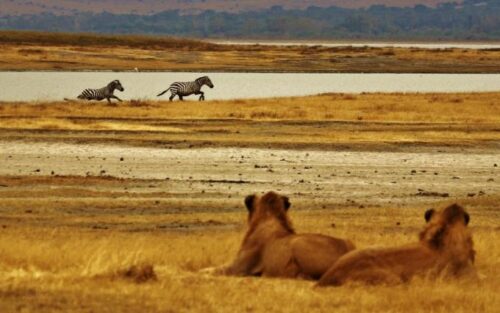 The future of these big cats is of concern throughout the continent: 3/4 of the populations studied are in decline and, in just 21 years (3 generations for lions) the world has lost 42 percent of the lions that populated the African continent. Today, fewer than 20,000 lions still survive, and they have become extinct in 12 Sub-Saharan countries. Long extinct in North Africa, the lion (Panthera Leo) is becoming extinct in East Africa where only a few hundred individuals still survive.
The other main threats are the reduction and fragmentation of the habitat, a problem that also concerns the prey: the presence of buffaloes, gazelles and zebras is ever rarer, depriving the lions of food. Imported diseases also contribute to the dangers facing residual big cat populations. In the nineties, distemper killed almost one-third of the Serengeti lions (Tanzania), and many more died of tuberculosis brought by domestic cattle through contact with buffaloes..

Conflict with local communities also endangers the survival of the lions that are often killed by cattle raisers whose herds have been attacked by lions. Then there is always the flourishing business of trophy hunting, in which rich hunters pay thousands of dollars to shoot lions in game reserves. Lastly, there is the most worrying danger of poaching fed by the illegal traffic in lion bones (highly sought after in traditional medicine on the Asian market). Only humans are capable of destroying the powerful and admirable society of the lions.