There are at least eighteen countries, where children are recruited and used in armed conflicts. From regular army to rebels, from guerrilla movements to drug cartels. The phenomenon has assumed the status of a humanitarian disaster.

Dahara was 15 and had never used a weapon until he arrived in Libya, together with his eighteen-year-old cousin Hagar. They got into a pickup truck in their tiny village in Chad and from there, together with others, they made the long desert journey lasting for days and reached a training camp in the south of Libya.
Before they left, he was told they would go to work in Libya and would afterwards go to Europe if they wanted to. Instead, he was given a gun. He had to follow the orders of some Libyan militiamen. There were many mercenaries there from Chad, Nigeria and Mali. 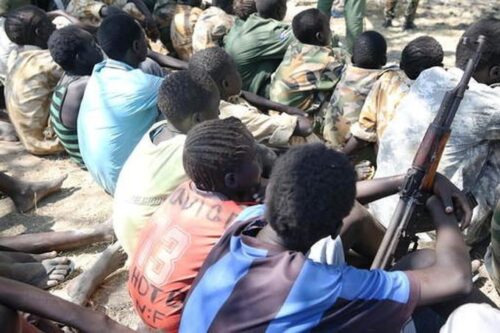 At the Al Jazeera military base in the outskirts of Mogadishu, in Somalia, Idris is a new recruit at the age of ten. He likes drawing. His leader gives him some paper and he uses it for drawing. He has very little time left as his instructors are in a hurry to get him and the other recruits ready in a few weeks. Idris is too busy to pursue his hobby. He imagines he will be a painter when he grows up. In his free time, he meets Yusef, also ten years old. But his friend is lucky, with better clothes and better food. Yusef is a member of the bodyguard of a government official: that is why he always seems to be better off.
The child soldiers are forced to join the armed groups in different countries of the world and trained to kill. In the context of the Covid-19 global pandemic, the ‘virus’ of violence from which the child soldiers suffer in situations of armed conflict is even more lethal in that it destroys their life, their dignity and their future. 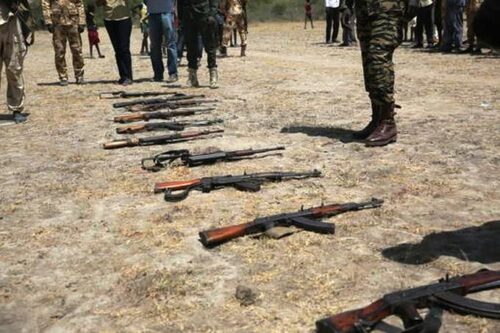 It is estimated that there are about 250,000 minors engaged in war operations, used as soldiers and forced to commit unspeakable crimes. Many of them are aged between 14 and 18 and many were recruited at the age of ten. There are at least 18 countries where, from 2016 up to now, the use of minors in armed conflicts has been documented: Afghanistan, Cameroon, Colombia, The Central African Republic, The Democratic Republic of Congo, India, Iraq, Mali, Myanmar, Nigeria, Libya, The Philippines, Pakistan, Somalia, Sudan, South Sudan, Syria and Yemen. Despite all efforts to counteract this phenomenon, the number of recorded cases has continually increased between 2012 and 2020. In 2019 alone — UNICEF maintains — around 7,750 minors were recruited, used in their dozens by guerrillas, armed groups and regular armies. Somalia, according to UN sources, is one of the states most involved with over 1,500 child soldiers, mostly kidnapped by al-Shabaab and forced to fight. In Central Africa, where minors were used by all the main parties to the internal conflict that has gone on since 2013, the phenomenon has assumed the status of a humanitarian disaster.
In Colombia, even though a peace accord has been signed between the government and the Fuerzas Armadas Revolucionarias de Colombia- Ejército del Pueblo (FARC), other armed groups continue to recruit children. They are used not only by guerrilla movements like the Ejército de Liberacion Nacional  (ELN), but also by demobilised paramilitary groups such as Autodefensas Unidas de Colombia (AUC). 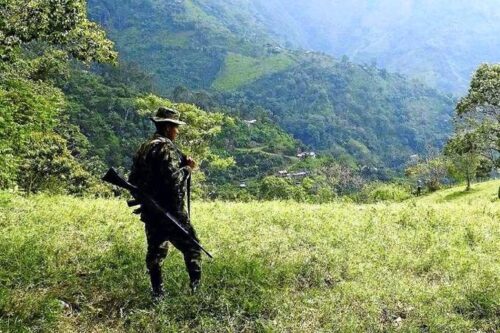 According to a study by Defensoria del Pueblo, a public Colombian institution, the average age of recruits is 12. The ELN guerrilla groups are composed, according to some estimates, of 40% minors while in the AUC paramilitary militias minors amount to 30%.
In Mexico, corruption, blackmail and kidnapping are the usual methods used by the drug cartels to recruit children. According to the ‘Red por los derecho de la infancia’, the narco-children number about 30,000. Not all of them are armed; most of them are informers or drug-pushers. In the agricultural areas of Sierra di Durango and Michoacán, they are used in the cultivation of drugs.
The youths often play an important part in human trafficking and the kidnapping of migrants. Some of them become ‘sicari’ (assassins).
One of the 17 aims of sustainable development established by the UN by the year 2030 requires that states adopt immediate and effective measures to guarantee the prohibition and the elimination of all forms of work by minors, including the recruiting and use of child soldiers and an end to all forms of work by minors before the end of 2025. The aim seems very remote indeed. 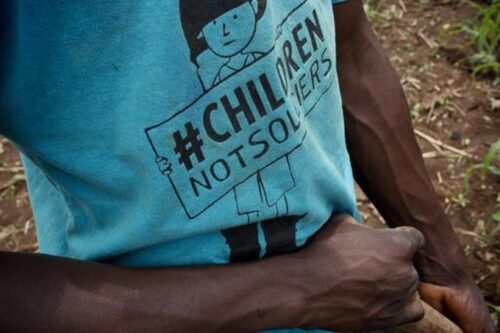 Recuperating child soldiers represents the most difficult part of what is required to provide a better future for the boys and girls marked by terrible experiences of violence. Following the end of various conflicts in sub-Saharan Africa, tens of thousands of child soldiers were sent home. Very often the children recruited in refugee camps have no families, either because they lost them or killed some members of their communities and are therefore unable to return to their villages. UNICEF and a number of NGOs are helping the children to become part of transition structures as a first step towards ‘adapting to peace’, where they attend professional training courses that open up job possibilities.
The psychological problems are not to be underestimated: the children who have committed atrocities are marked by these experiences for their whole lives; their psychological recovery is essential for a new life. 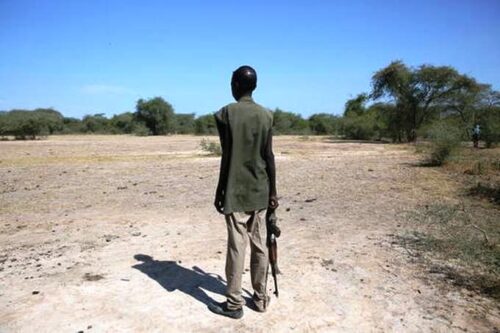 Last February 12, the International Day against the use of child soldiers, the EU High Commissioner, Josep Borrell, and the Special Representative of the Secretary General of the UN for children and armed conflict, Virginia Gamba, issued a single communique to draw attention to this tragic but still globally widespread phenomenon. As the communique states, despite all the international efforts, children continue to pay the highest price in the conflicts of the world and to be recruited to fight – and consequently are deprived of their fundamental rights. It also indicates the importance of universalising the ratification of the Optional Protocol on the involvement of children in armed conflict (OPAC), adopted by the UN General Assembly in 2000, according to which minors may not be recruited until they are eighteen years old.
Even though 170 states have signed the Protocol, it is far from being implemented completely. Increasing awareness of the phenomenon of child soldiers is not enough: what is needed are action and concrete commitments to ensure that minors are really protected and that their rights in infancy are respected.
Social rehabilitation is a long journey, though it is not impossible. Ensuring these children the right to grow up in a protected environment, with education, access to secure schools and work experience, means ensuring their right to life itself.