Azerbaijan is a Caucasian republic located in the south-east, straddling Asia and Europe, in an extremely advantageous position that provided these territories with an opportunity to play a crucial role in the international, economic, and cultural ambit.

Watered by the Caspian Sea, to the north it borders Georgia and Russia, to the west Armenia and Turkey, and Iran to the south. It is said that its name comes from the Persian expression meaning ‘Land of Fire’ which may refer to its deposits known since ancient times, or from its status as the former centre of the Zoroastrian faith. It has been inhabited for more than three thousand years (in the region of Baku, objects from the Bronze Age have been found), and the first people to settle in those territories were the Persians followed by the Greeks. In the course of the centuries, the land came under numerous rules led by the Romans (from the 1st century to the 3rd century A.D.), the Persians (from the 3rd century to the 7th century A.D.), the Arabs (7th century A.D.), the Mongols (from 13th to 15th century A.D.) and again the Persians of the House of the Safawidi. 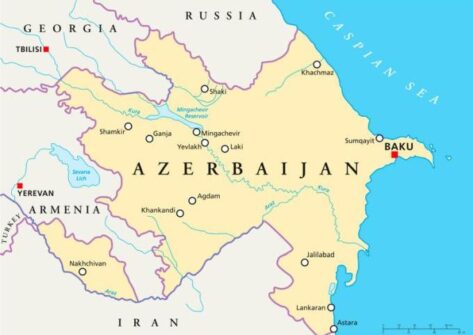 It was in the 17th century that Russia, a great power, slowly began to extend its political domination in the northern part of the country while Persia kept control of the south. This gave rise to a harsh conflict between the two powers which ended in the 19th century with a division between Russian and Persian Azerbaijan sanctioned by the terms of two treaties: that of Gulistan, in 1813, which established the Russian-Persian border along the Aras River, while that of Turkmancay, in 1828, guaranteed Russia the khanate of Nachicevan (along the present border between Armenia and Turkey).
The territory of Azerbaijan was then divided into three Russian administrative areas: Baku, the provinces of Elizabethpol and the province of Yerevan which formed part of present-day Armenia.
Already in that epoch, the Russian Empire was engaging in oil extraction in those territories and, in 1870, began industrial production while building pipelines and a railway that joined Baku and Tbilisi, in Georgia, to transport the crude oil. It is important to bear in mind that, even in preceding years, there were oil refineries in Baku and, in 1874, the first oil company was founded: ‘Baku Oil Society’; in 1878, the first pipeline was laid over a distance of 12 km, to link the Bulakan oil wells
to the Baku refinery.
Those were years in which industrialisation was rapidly increasing and the need for oil accompanied industrial growth. This demand for oil allowed the country, in 1901, to become the largest producer of petroleum in the world with over 11 million tons per year to meet the needs of half the industries in the world. Production was doubled in 1941 reaching a quota of 23.6 million tons and, a few years later, in 1949, production in the seas developed reaching 12.9 million tons in a matter of twenty years. 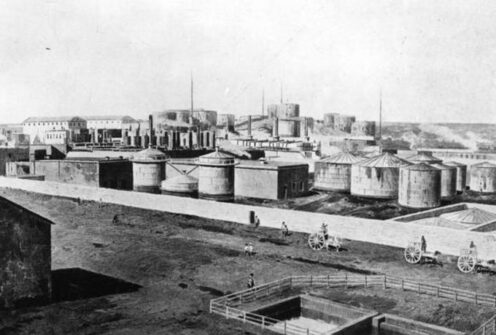 After the end of the First World War, after the collapse of the Russian Empire, Azerbaijan, together with Armenia and Georgia, united to form the ‘Transcaucasia Democratic Federative Republic’, which, being dissolved after only six months, allowed Azerbaijan to declare independence and to found, in 1918, the ‘Democratic Republic of Azerbaijan’, the first Republic of the Muslim world to allow women to vote. Independence was not to last (it survived just two years) and ended in 1920, when the Red Army invaded the region to unite it, in 1922, to Georgia and Armenia. This is how the ‘Transcaucasia Soviet Socialist Federative Republic’ came into being as a mere prelude to its annexation by Russia which followed in 1936.
In 1924, the USSR created the autonomous region of ‘Nagorno-Karabachskaja’, (inhabited by Armenians and therefore Christian) which soon came under the control of the Azeris. It was this operation that laid the foundation for the future conflict between Armenians and Azeris. 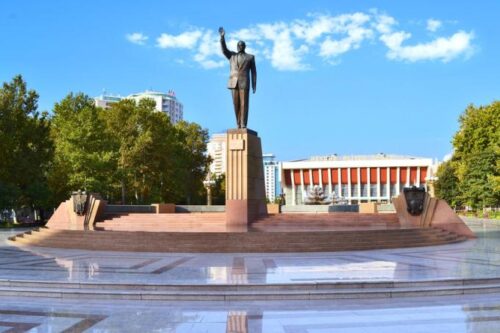 In 1991, following the fall of the USSR, Azerbaijan again declared independence. The first years were greatly compromised by the matter of the war with Armenia over Nagorno-Karabakh. In just two years (from 1991 – 1993), the ferment witnessed the election of three presidents until the arrival of Heydar Aliyev (he had already been in the government of the country in 1969 as Secretary-General of the Communist Party of Azerbaijan until 1981 when he became an influential member of the Politbureau in Moscow). Once he was elected president (and re-elected in the following elections of 1998) Heydar normalised the difficult situation and, in May 1994, signed a ‘ceasefire’ agreement with Armenia over the question of Nagorno-Karabakh. The successor of Heydar Aliyev as head of the country (after doubtfully democratic elections) was, in October 2003, his son Ilham Aliyev, formerly Prime Minister.
Even today, the Aliyev ‘clan’ enjoys unopposed power over Azeri territory, devoting itself to managing the ‘res pubblica’ completely to the benefit of his family using the large income from oil production to make private investments in the building industry and the purchase of real estate abroad. 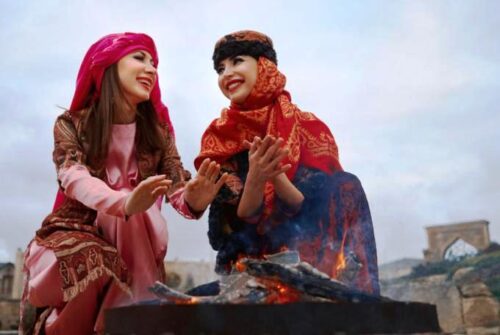 Today, the country has 9,593,000 inhabitants of whom 91.6% are of Azeri ethnicity while the rest are mainly Russian or Armenian. The urban population amounts to 53.1% while the rest live in rural areas and, in Baku alone, there are 3,000,000 inhabitants. Besides being the most populated country in the southern Caucasian area, its population is the youngest both in this area and in the Eastern-European area. In fact, 37.8% are below 24 with only 6.64% over 65, and the average age of the nation is 30.9. Ninety-six percent of the inhabitants belong to the Muslim faith and 85% of them are Shiites and 15% are Sunnites. Nevertheless, there are religious minorities in the country such as Jews and Christians, and of the latter, the Orthodox Church has as its head the Patriarchate of Moscow. From an administrative point of view, Azerbaijan is divided into 8 regions, 66 districts and 11 cities. Apart from Baku, the most important centres are: Gandja (316,300 inhabitants); Sumqayit (314,800 inhabitants); Mingachevir (97,800 inhabitants) and Nakhichevan (84,700 inhabitants).