The Coronavirus pandemic has hit Brazil’s indigenous people even harder than the rest of the population. To protect themselves, some peoples retreated deep into the rainforest.

It’s seven o’clock in the morning when the Capuchin friar Paolo Braghini sits down in a small aluminium boat, starts the outboard and sails up the Igarapé de Belém, a wide river that winds through the Évare I Indigenous Reserve in north-western Brazil. The rainforest around the river is so dense that the shore is barely recognizable. Branches protrude over the water. Some trees stand like piles in the river. As soon as Brother Paolo has set off, the sky opens its floodgates and the wind hits thick drops in the face of the 45-year-old friar. It’s rainy season in the Amazon basin.
After two hours of sailing, Brother Paolo approaches the village of Nova Jutaí. Around 100 indigenous people from the Tikuna tribe live here. Some of them stand on the shore and wave to the missionary as he guides the boat towards the village. The Capuchin Paolo is an Italian and has been a missionary for 16 years in the Reserves Évare I and II. The missionary looks after around 100 indigenous villages. Some he reaches only after days of boat trips. 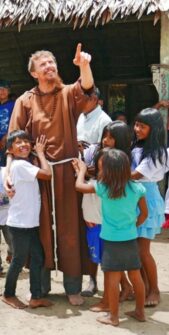 Brother Paolo has just docked when a swarm of cheering children leads the tall friar into the village. Nova Jutaí consists of a dozen wooden houses. They were erected on stilts so that they would not sink into the mud during the rainy season. Behind it the jungle begins, from which the screeching of birds can be heard from time to time.
First of all, the missionary pays a visit to the oldest man in the village. The 71-year-old Hortênsio Antônio founded the village 45 years ago and was only one of four people who fell ill with Covid-19 in the village. He has his own explanation of how this came about. “The virus attacked me while I was fishing”, he says in Tikuna. He sits in a hammock in the middle of a wooden house with almost no furniture. There are a few stools around, but for beds, tables, and cupboards one would look in vain. The Tikuna usually sit on the floor, they sleep on hangings or on bast mats. 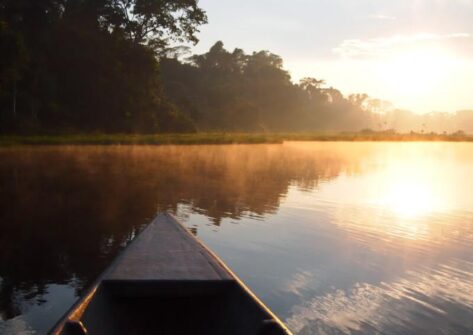 “When I paddled back to the village in my canoe, I felt the fever rising in me”, Antônio continues. “It was Corona”. In the imagination of the Tikuna, all diseases have a master. Antônio is convinced that the Lord of the virus haunted him on the river. It is more likely that Antônio was infected by another villager who had previously been in the next larger village. Despite his age, Antônio is an agile man, he has full black hair and alert eyes. Only his missing front teeth indicate his advanced age.

Strong traditions
It was months ago that he contracted Covid-19. A few days he felt bad, then he felt better, says Antônio. He did not feel fear. After all, the Tikuna would have a cure: burning honeycombs and tree resin. He had inhaled the smoke. “He protected us”, says Antônio.
There were no deaths in Nova Jutaí, the settlement came through the pandemic well. Brother Paolo has his own explanation for this: “The village community is intact. During the pandemic, the villagers listened to the Kaziken, their chief, and only left the village in urgent cases. They wore masks, no one strayed. The indigenous tradition strengthened the village”. Meanwhile, Hortênsio Antônio is vaccinated, like everyone in the village. The indigenous people in the Évare Reserves were given preference in the distribution of the vaccine. Brother Paolo is very relieved: “I can visit my communities again”.
When the rain subsides in Nova Jutaí, the community moves into the small green-painted wooden church. The indigenous people lovingly decorated it with palm leaves and flowers. 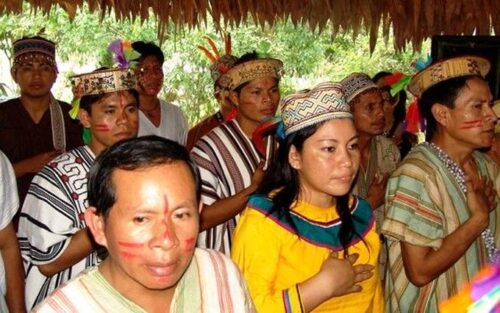 The service begins with a sweeping song on Tikuna. Then Brother Paolo begins the divine service in the language of the indigenous people: “Numagüẽ!” — “Good day!”
After the celebration the community invites him to eat in the parish hall, which is open on all sides. To celebrate the day, the men shot a wild pig in the forest. There they kill monkeys and deer. Or they fish on the Igarapé de Belém, in which they lay out nets. The community sits together chatting. Everyone eats with their hands.
The families of Nova Jutaí own small fields on cleared forest areas where they grow plantains and cassava. The Amazon fruits Cupuaçu and Açaí are also important for the local economy. Their juice and pulp are bottled and sold at the market in Tabatinga, a border town with Colombia, five to six hours away by boat.
Social assistance also contributes to the maintenance of the village. From it, the Tikuna buy rice, sugar, and salt, but also consumer goods such as soap, kitchenware, and mobile phones. Although there is no mobile network in Nova Jutaí, the Tikuna also take selfies. They keep in touch with the outside world via radio. Electricity is generated by a diesel generator, which the residents start when needed.
It is dark when the missionary returns to Belém do Solimões, on the banks of the river of the same name. Here Brother Paolo lives with three friars in a brightly painted wooden house. Belém do Solimões is the largest indigenous settlement in Brazil with around 5,000 Tikuna. 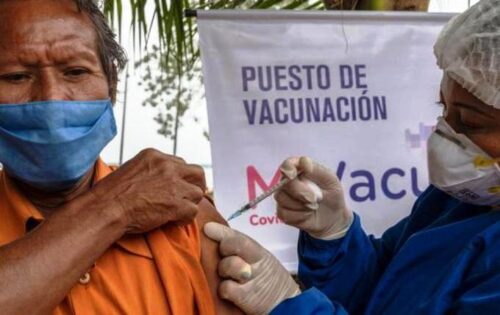 Every evening they hold a service in a different neighbourhood. Their house is open to everyone at all times. Brother Paolo has created an Olympics, to which people travel from afar to compete in disciplines such as archery, canoeing, and fire-making.
“When I got here, there was no mission. At the time we were just two of us, it was very difficult”, he says. “Today, many indigenous people thank us for changing the place for the better. We have become part of their family”.The next day, Brother Paolo visits the shaman of Belém. The ‘Pajés’, as they are called in the language of the indigenous people, are spiritual and medical authorities. They are familiar with medicinal plants, natural medicine, and ancient rituals.
Tchopaweecü Üegücü is a quiet and modest-looking man. He thinks he is 58 years old. His name means ‘White beak of macaws’. The Pajé sits down. His gaze seems to be directed to a place far away. “At the beginning of the pandemic, I didn’t know if I was up to the virus”, he says. “Then I dreamed of a boat on the Rio Solimões. In it sat the Lord of the disease. But I was able to push the boat back onto the river because I knew that he fears bitter medicine”. 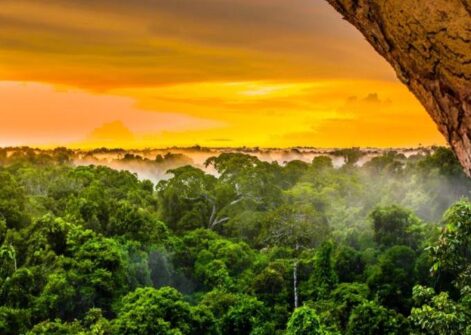 Üegücü advised people to burn honeycombs and resin and to inhale the smoke deeply. He also advised to drink tea made from leaves and herbs. In fact, studies have found that a tea made from the leaves of the Jambu herb has a strong soothing effect on breathing difficulties such as the type that occurs with Covid-19. Around 150 people fell ill with Covid-19 in Belém, so many of them visited the Pajé. “The spirits of the sick took refuge on the rivers, and I went there to retrieve them”, he says. Two people from the village died in the hospital in Manaus. Thus, the mortality rate in Belém is far below that of Brazil as a whole.
Finally, the Pajé’s wife starts a fire to burn honeycombs and resin. Brother Paolo takes a deep breath of the smoke. To say goodbye, he hugs the Pajé. You can feel the respect and sympathy of the two men for each other. They are the religious signposts of Belém. Both give people support and orientation.