On 6 March 2011, a group of teenagers wrote anti-government graffiti on a school wall in Dara’a, a Sunni-majority city in the south of the country, suffering from a long drought and poor harvests.

During the following days, the regime reacted with arrests and one of the students was found dead. But instead of fear, the opposition spread throughout Syria. On March 15, 2011, protesters organized in the capital Damascus to demand “a Syria without a dictatorship”. The protesters were bold enough to destroy a statue of President Hafez al-Assad, which had been an unthinkable act just a few days earlier. The protesters replaced the statue with a banner demanding an end to the regime, and they set the local Ba’ath party headquarters on fire.
To quell the protests, Bashir al-Assad announced the release of some 200 political prisoners in the hope of quelling the wave of protests. The move failed. Tensions continued to rise and calls for the overthrow of the Ba’ath regime in Syria proliferated on ‘Facebook’ and other social media. The violence in Syria escalated quickly. In May, the government deployed the army in the streets.  Many troops started to desert. The deserters joined the rebels to form the first armed militias. The civil war had begun. In July, a deserting officer who found refuge in Turkey announced the creation of the Free Syrian Army (FSA). The FSA would also include some Islamist groups. 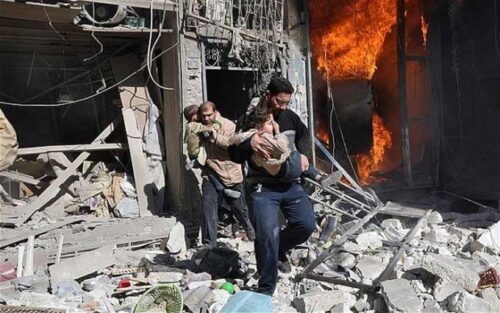 2012: Damascus under Fire. In July 2012, the rebels attacked Damascus. The government would keep control of the capital, but it would lose control of peripheral areas such as Ghouta.

2013: Hezbollah. In April 2013, Hassan Nasrallah, general secretary of Hezbollah (a key ally of Syria and Iran) deployed some of his guerrilla warfare-trained military units in Syria to back the al-Assad government against the increasingly radicalized Sunni rebel forces. In August 2013, an alleged chemical weapons attack against two rebel bastions in Ghouta (in the outskirts of Damascus) killed some 1,400 including rebels, civilians and children. The United States threatened to retaliate directly against Damascus. But Moscow manages to thwart the attack by guaranteeing Damascus’s willingness to destroy its chemical arsenal. Meanwhile, Kurdish fighters established an autonomous territory in the northern areas of Syria: Rojava 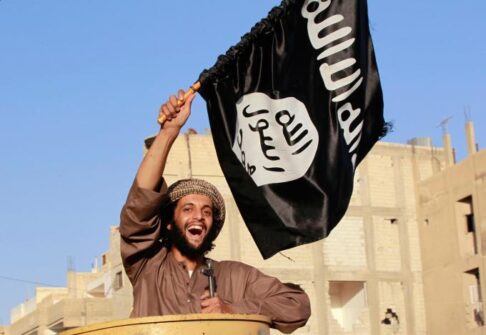 2014: ISIS. During 2014, Islamic State in Iraq and Syria (ISIS), which had gained control of Mosul and key areas of northern Iraq, crosses the border into Syria, establishing its capital in the city of Al-Raqqah. The presence of the Islamic State turns Syria into a global proxy battlefield, attracting overt interventions (direct and indirect) from the United States, Saudi Arabia, the UAE, Qatar, France and Turkey.  By September 2014, President Barack Obama organized an international coalition to challenge Isis. The US relies on the Kurds to carry out ground operations, which were successful against the Islamic State. The Kurds would take Kobane in 2015. But, in 2014, the various rebel forces start to inflict significant defeats at the expense of the Government especially in north-central Syria and around Aleppo, while ISIS continues to dominate in the north.

2015: Moscow Intervenes to Rescue Damascus. In September 2015, Russian aircraft launch attacks against ISIS as well as other Islamist Groups. The Russian raids would prove indispensable in helping Damascus take back the country.

2016: Turkey Makes a Direct Move. Ankara, which backed the Free Syrian Army and facilitated the transfer of various fighters to join the militias fighting against Assad in Syria, makes a direct move. In August, following a series of terror attacks in its territory, President Erdogan orders the deployment of troops to target the Islamic State as well as Kurdish fighters, which Ankara claims are affiliated with the Kurdistan Workers’ Party or PKK. 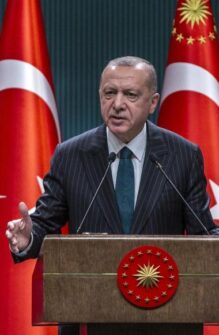 Meanwhile, thanks to Russian help, the Syrian army advances north from Damascus. In the autumn, it lays siege to Aleppo, Syria’s second-largest city. And by Christmas of that year, Syrian regular forces break through to take the eastern part of town. The various rebel groups shift to the western side or start moving north. Turkey does not view the fall of Aleppo with favour, given it had backed many of the rebels there. But, at the end, Ankara, Tehran and Moscow agreed to allow for an evacuation of both civilians and militiamen. Most would go to the area of Idlib. The Aleppo evacuation marks a major turning point in favour of Damascus. The rebels have suffered a significant blow, and they are in retreat.

2017-2018: ‘Peace’ and Chemical Weapons. ISIS is weaker, but it continues to fight and control much of northern Syria. The Russians – and the other militias and foreign armies – focus on Al-Raqqah, the ISIS capital. By April 2017, Syria has gained back key areas of the country under its control. The fighting and attention shift to Idlib where many rebels from Aleppo have found refuge. But, a chemical weapon attack once again – as in 2013 – threatens to draw in direct military intervention from the United States. On April 4, The Americans accused Syria (and Russia) of launching rockets with sarin gas from aircraft against a medical facility in the village of Khan Shaykhun, near Idlib.
This was the second most serious chemical attack in Syria
after that of Ghouṭa in 2013.
On April 7, 2018, believing the accounts of the White Helmets, the Americans accused Syria of having launched another chemical attack. Once again, the attack took place in Douma, a peripheral area still under partial rebel control, outside Damascus. In the alleged attack – many have expressed credible doubts about it – the Russian and Syrian air forces were targeting Jund al-Islam, one of the radical Islamist factions that were hiding in the outskirts of Damascus from where they launched missiles and mortars against the capital. On April 14, the United States France and Great Britain bombed Syria with cruise missiles, targeting the facilities alleged to have developed and produced the chemical agents. 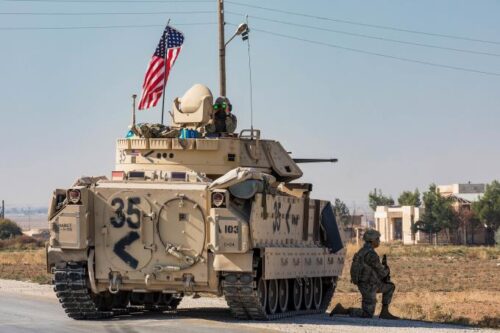 Syria witnessed major developments in 2020. Among some key developments, however, were the Idlib deal with Russia and Turkey agreeing to share security control, even while the respective strategic goals remain different. Turkey wants to obstruct the Kurds, while the Russians and Syrians want to capture those still hiding.
On March 5 2020, President Recep Tayyip Erdogan met Russian President Vladimir Putin at the Kremlin to discuss the situation in Idlib. They announced a ceasefire and joint Turkish-Russian patrols along the M4 highway. Meanwhile, Trump decided to withdraw the majority of the US troops from the war-torn country. Russian troops replaced the U.S. troops in some of the military bases in north-eastern Syria.
As for Russia and Turkey, they have an agreement to challenge the remaining ISIS fighters. But, Turkey maintains forces in the north, which support Hayʾat Taḥrīr al-Shām – HTS (which in turn is fighting against ISIS) and other rebels in Idlib, against the Syrian Democratic Forces (SDF) to cut them off from potential attacks in Turkey.

2021: Biden is sending US troops back to northern Syria. In his inauguration speech, Biden said that the United States needs to take on a “protagonist” role in the world. (A.B.)