Known as African olive or bush candle, this tropical tree is highly beneficial to human beings.

Medicinal plants have been utilized for different medicinal purposes for thousands of years. These medicinal plants are processed in different forms such as teas, decoctions, infusions, powders, tinctures, poultices, and other herbal formulations before admission for a given health condition. One of the medicinal plants with great medicinal potential is Canarium schweinfurthii Engl., that belongs to the plant family Burseraceae. This perennial plant is popularly known as African olive or bush candle; a tropical tree that is highly beneficial to human beings. It is one of the largest forest trees with its crown reaching to the upper canopy of the forest, with a long, straight, and cylindrical trunk. Its bark is thick, becoming increasingly scaly and fissured with age. 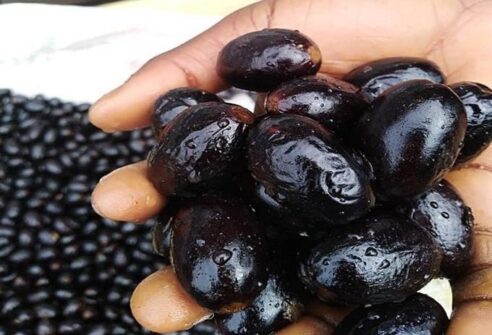 This plant, its leaves pinnate and clustered at the end of the branch, is widely distributed in east, central, and West Africa. It is known by various local names throughout its distribution range, including Abel (Cameroon), Aiele (Ivory Coast), Elemi (Nigeria), Bediwunua, Eyere (Ghana), Muwafu (Luganda in Uganda), Mpafu /Mbani (Swahili in East Africa).The health benefits of Canarium schweinfurthii are numerous in that it is beneficial to virtually all the internal organs and the external parts of the human body. The importance of this special fruit and its derivatives can be practically seen throughout its distribution range in most African regions.
It is a good source of health promoting secondary metabolites, including phenolic and terpenoic acids, and has been reported to possess several pharmacological activities such as analgesic, antimicrobial and antioxidant, anti-diabetic and anti-inflammatory activities. 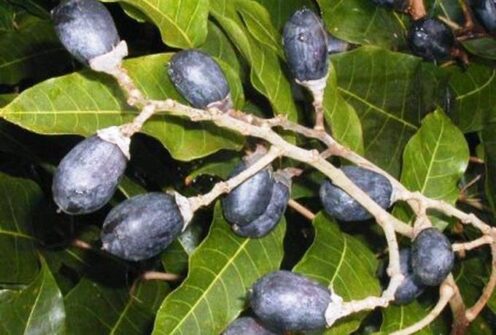 In many communities, the ripe fruits of Canarium schweinfurthii are picked and first soaked in warm water for about 2-3 days to soften before consumption. In fact, the soaking in warm water is also believed to boost its taste. The outer pulp of the fruit is oily and often used as an ingredient for preparing dishes. This oily fruit pulp can be cooked and processed into a fruity-butter.
The pulp oil is known to contain palmitic acid and oleic acid. The seed-kernel is oily and edible and contains several fatty acids including oleic and  linoleic acid, palmitic, and stearic acid.Canarium schweinfurthii has been used traditionally, for a long time, to treat various ailments of the human body throughout its distribution range.  The stem bark is emetic and purgative and its decoction is used as a treatment against hypertension, sickle cell anemia, dysentery, gonorrhoea, coughs, chest pains, pulmonary affections, stomach complaints, food poisoning, roundworms, colic, and pain after childbirth. The pounded bark is used in the treatment and management of leprosy and ulcers.
The root of Canarium schweinfurthii is used against adenites (inflammation of a lymph node) and root scrapings are made into a poultice. The leaves are boiled with other herbs and the decoction
used to treat coughs.
The leaves can be squeezed to obtain the sap that can be used alone, or combined with other herbs for treating coughs and colds. 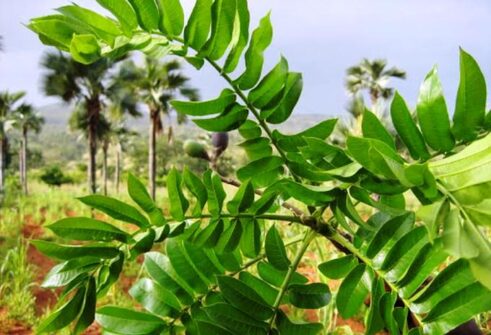 Furthermore, the leaves are used as stimulant against fever, malaria, constipation, diarrhea, post-partum pain, rheumatism and sexually transmitted diseases. The resins collected from Canarium schweinfurthii tree stem bark can be used for preparing herbal medicines that treat and fight against intestinal worms such as roundworm and as an alternative for mastic used for dressing wounds. Furthermore, the resins also serve as an emollient, which is effective for treating skin infections such as eczema, skin rashes, and sunburn. The seeds are roasted and pounded and the resulting powder mixed with jelly to treat wounds.
The high medicinal potential of Canarium schweinfurthii stem bark may be due to the various secondary metabolites contained in it including anthocyanins, flavonoids, tannins, quinones, saponins, alkaloids, steroids, terpenoids and leuco-anthocyanins.
In addition to the medicinal values, Canarium schweinfurthii seeds can be used for ornamental purposes such as making necklaces, bangles and costumes. The seeds can also be used for making local instruments. The resin obtained from the stem bark is heavy and sticky and is used to repair broken pottery, for caulking boats and as a gum for fastening arrowheads to shafts.