There has never been a Kurdish State. But, there has been and still exists a Kurdish nation. The Kurds have occupied the mountains that extend from western Iran to eastern Turkey through Iraq and Syria for centuries.  because political boundaries have worked that way, and there is no Kurdish nation, as such, although they have occupied their mountains for at least a thousand years.

The Kurds were a thorn in the side of Saddam Hussein’s Iraq. The Kurds have also engaged in a war of independence, to form their own state, for well over forty years. If the American invasion of Iraq has facilitated Kurdish autonomy from Baghdad.
Many oil companies have been dealing exclusively with Erbil, the capital of what was Iraqi Kurdistan, now ever more effectively ruled by Masoud Barzani and his Kurdistan Regional Government. 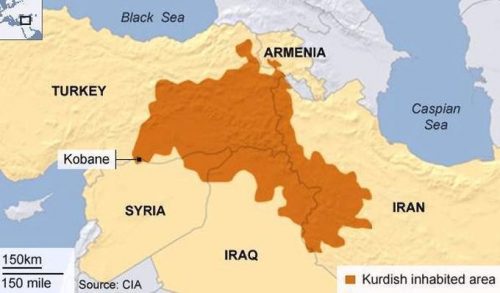 Indeed, on paper, the Kurds still dream about a united or greater Kurdistan. But, there are many different visions of such a Kurdish entity, depending on the origin (i.e. Iraqi, Syrian, Turkish, Iranian etc.) Doubtless, it will be hard if not impossible for other actors to accept that the Kurdish dream come true. So, there is a real risk that the Kurds and their nationalist aspirations will be crushed by the interests of other actors which are deciding the fates of Syria and Iraq.
That said, there’s no question that part of the merit for releasing areas of northwestern Iraq from the yoke of ISIS and other islamists must go to the Kurdish militias. They will expect compensation for acting as the vanguard and supplying infantry against the self-proclaimed Caliphate. Of course, the Kurds received logistical, financial, military and political support from many powers. But, the United States and the Western countries provided the lion’s share of that aid. Without this backing, the Kurds would not have achieved their victories. Still, the Americans have had to confront the issue of Kurdish nationalism and objections to it when they invaded Iraq.

Therefore, while the Americans will likely agree to demands from Syrian Kurds for international recognition for a self-administered territorial status in northern Syria (Rojava). They will probably object to similar expectations from Iraqi Kurds. The latter will no doubt express their right to self-determination, namely to form a true independent state of Iraqi Kurdistan. The risk is that the war against ISIS could evolve into a new phase of war that could alter the political geography of the region, damaging the ‘peace’ that the West and Russia want to establish.
The Iraqi government has promptly opposed any action by the Kurds in the direction of independence, judged unconstitutional. For their part, Iraqi Kurds held a ‘non-binding’ referendum in September 2017. Over 93% of voters chose secession from Iraq.
Turkey has called the referendum a “fatal mistake” that would help make the region more unstable. In fact, Ankara fears that an independent Kurdish State (as opposed to the current autonomous region) of Kurdistan would urge Kurds within its own borders
to join it. The Saudis have seized the opportunity. 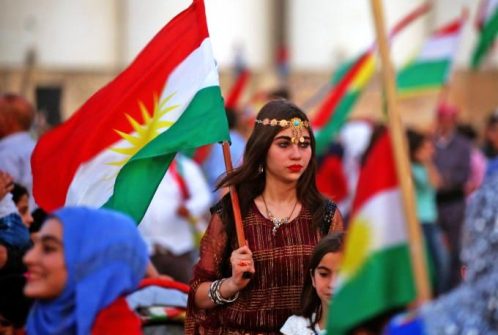 They have expressed support for the Iraqi Kurds’ independence referendum, securing a well-tested military ally in a region where it has had none so far. Such a move would most certainly prompt Tehran to oppose the independence of Kurdistan. This would be a rare case where Tehran and Washington agree, because Trump’s Special Envoy to the International Coalition Against the Islamic State, Brett McGurk, made it clear his government did not approve the referendum. The latter is torn between the Kurds and Iraqi government. The U.S. has made it clear that it much prefers a united and federal and stable Iraq to one that switches from fighting ISIS to Kurds.

After wreaking havoc from northern Iraq to eastern Syria, taking over the cities of Mosul and Raqqa, ISIS is finally in trouble in both Iraq and Syria. Indeed, it is hard to extricate the fate of ISIS without discussing both Iraq and Syria. But, this analysis shall focus on the Group’s Iraq manifestation, for it marks the final stage of the war that G.W. Bush began. ISIS is an ideological-religious group, rooted in apocalyptic eschatology. Its actions were amplified by the conditions of the Iraq War and its inherent fragility, rooted in its very inception from the ashes of the Ottoman Empire and the Sykes-Picot agreement. The Islamic State’s  demise is not on doubt. 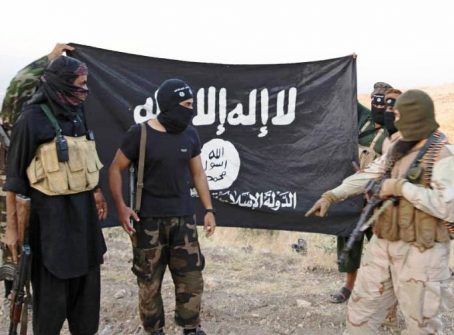 The major concern o this latest chapter of the war is the future of Iraq after the Islamic State or the Caliphate that ISIS carved out of the lands that the Assyrians once ruled. ISIS will temporarily disband. Many of its fighters will have died fighting, some will be captured. But, if the Iraqi government fails to radically change the conditions that allowed fueled the ascent of ISIS, there will be new editions and chapters of the war in Iraq. And the Shiites who dominated Iraqi politics today should understand this better than most: the same marginalization that Sunni dominated governments adopted against Shiites, fueled the socio-economic conditions that enabled their radicalization.

Iraq’s Next War Could be Just Around the Corner

The next war in Iraq might take a different name; it might feature different combatants. Yet, its result will still be more war. Baghdad, ever torn by ethnic and religious conflicts, has still not recovered from the instability after the American (and ‘Coalition of the willing’) intervention in 2003 and the fall of Saddam Hussein. It won’t magically recover after ISIS. The Sunnis, the Shiites and the Kurds will contend what is left of Mesopotamia.  Saddam Hussein was hanged on December 30, 2006, when the country was already in the grip of al-Qaida terror and sectarian vendettas from which ISIS rose, thanks also to the strategic support of former Baathist military officers.

Mosul Showed the Failure of the Iraqi Peace on Live TV

Mosul represents the Islamic State’s blitzkrieg-like advance into northern Iraq in 2014. Mosul offered little resistance, because such were the grievances of local Sunnis with the elected Shiite dominated government and the sectarian political schemes it played, that ISIS was all but welcomed. ISIS even established basic order, from ordering vehicle traffic to restoring basic services. 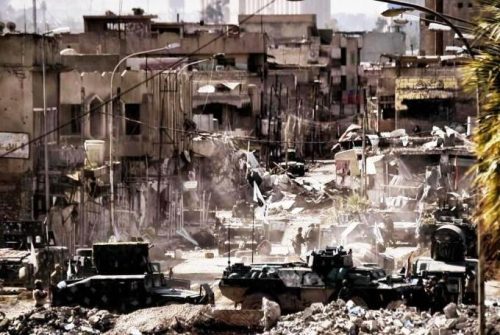 The City of Mosul

The fact that ISIS’s conquest was televised, turned the takeover of Mosul into the kind of media event that established the Group’s reputation. Mosul, even more than Raqqa, the capital of the Islamic State (in Syria) was a symbol of ‘prestige’, which inspired many volunteers from all over the world to join ISIS. It is in Mosul at the Hadbaa mosque that ISIS’ s leader, Abu Bakr al-Baghdadi proclaimed the establishment of the Islamic State. It was an actual bona-fide Caliphate, which also distinguished it from al-Qaida, which would from then on be relegated to ISIS’s amateurish cousins. Mosul became the foundation of ISIS’s military and psychological warfare.
Yet, Mosul is mostly a symbol of weakness – the weakness of the Iraqi army and the corruption of the post-Saddam government. In June 2014, as ISIS advanced, the now largely Shiite dominated Iraqi army retreated, leaving the unarmed civilian population to their fate. ISIS killed unarmed civilians, which would deepen sectarian wounds. Now, the problem in Mosul remains largely political. While military forces that fought and defeated ISIS, the government’s political ability to truly establish the kind of control needed for political, social and physical reconstruction may not be as strong – even if Haider al-Abadi replaced the widely criticized Nouri al-Maliki (for excessive Shiite partisanship, ignoring the demands and rights of Sunnis) in 2014. Al-Abadi , in turn, was replaced by Adil Abdel-Mahdi, a former member of Islamic Supreme Council of Iraq (ISCI), an Iraqi Shiite Political Party.
As ISIS has subsided, the governments were unable to prevent revenge along sectarian/confessional lines. There are militias, parties or tribes everywhere. Some of these militias are Shiite. In Fallujah for example, Al-Hashd al-Shaabi (The Shiite dominated Popular Mobilization Forces) killed and tortured hundreds of Sunni men – using methods not unlike those of ISIS, just in a smaller scale, exerting violence against Sunni civilians and combatants alike, perpetuating sectarian divisions.
Then there is Iran. Its intentions are ambiguous in Iraq. Iran is not going to back down from its expansionistic tendency in post-Saddam Iraq. Iran sees itself as a protector of Shi’ite interests.
It wants to continue overseeing it. Not surprisingly, the anti-ISIS coalition included thousands of volunteers, who report to Iranian Revolutionary Guard General Qassem Soleimani, who took orders from Supreme Leader Ayatollah Ali Khamenei himself. 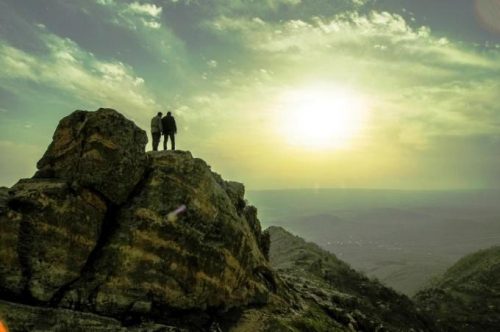 Ultimately, the demise of ISIS could match the curse that Bush met after the American invasion. He declared ‘mission accomplished’. He won the war and lost the peace. Iraq over the past 39 years has witnessed the use of all weapons expect for nuclear. Mustard gas, white phosphorus bombs, depleted uranium shells deployed from aircraft and cruise missiles of various generations. But medieval style violence was also in abundance, enough to make Hulagu Khan, the Mongol leader, who laid siege to Baghdad in 1258, blush.  The 2003 war was but the preface to over a decade of hundreds of explosions: mortars, car bombs, suicide bombers, beheadings, rape in an orgy of f ethnic and sectarian cleansing. Iraq has been the pinnacle of barbarism and fanaticism. Million Iraqis have become refugees abroad or internally displaced. The irony is that it still has more oil resources than Saudi Arabia.
Alessandro Bruno