The oldest desert in the world: a sea of sand caressed by ubiquitous fog. It seems to be desolate and unfit for human habitation. Appearances may be deceptive. Hidden in the heart of the Namib are incredible gems of life, plants and animals that have adapted to the most extreme conditions. A world still to be discovered.

The term nama, which gives this desert its name, means ‘a vast place’ and it may be used to describe a 1,300 km belt of sand, the oldest in the world according to the geologists and among the highest: an imposing bulwark against the Atlantic Ocean. A vast bed of schist, metamorphic rock surmounted by a more recent layer of limestone, it contains a sea of dunes, the largest in Africa – apart from the Sahara Desert, obviously.
It is the dunes that perform the role of absolute leadership, especially those facing the ocean between Walvis Bay and Swakopmund.
These are dunes of sand with their colours, dimensions and steep sides that challenge the viewer and his desire to climb them. They each have a name and even a voice. 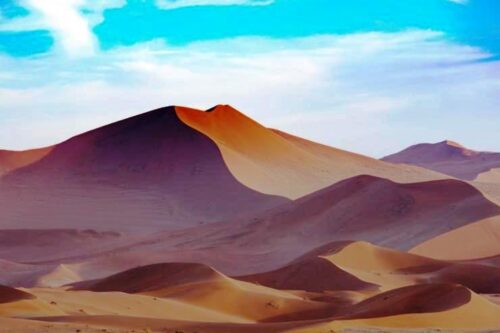 A large part of the desert is located within a park called the Namib Naukluft Park, the largest reserve in Southern Africa. Starting in the early 1900s, in the area of the Swakop River, the protected area was gradually extended and today it covers almost 50,000 square kilometres. It is an enormous ancient desert that derives from two factors: almost permanent high pressure and freezing cold oceanic currents.
The first of these causes such low rainfall that there is almost no surface water. In fact, the few existing wadis (riverbeds) are almost always dry and even when it rains, their way is blocked by the dunes giving rise to the use of the term temporary oasis; they are formed by the waters of rivers in flood after infrequent rains and are unable to break through the barriers of sand and find a way to the sea.

Life-giving haze
The interaction between the cold, damp oceanic winds deriving from the cold Benguela Current which comes from the Arctic regions and the warm, dry air of the desert causes thick fog to form, especially in the early hours of the day. It is this fog that makes the Namib what it is.
The same winds that drive away the rains create the conditions for the formation of fog which it drives for tens of kilometres towards the interior enabling various species of plants and animals to capture the microscopic droplets of humidity using refined methods of relating
to the environment. 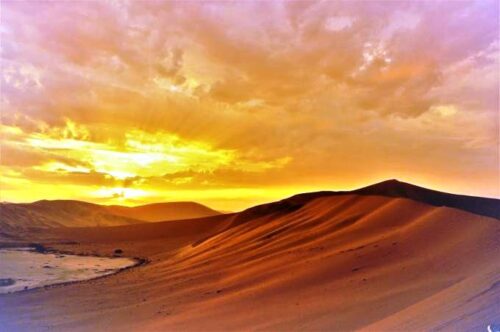 Among the unusual plants, it is worth mentioning is the Welwitschia mirabilis whose leaves are like green ribbons that grow continually from the base, up to five metres long, twisted together and resting on the ground. The ends continually become frayed, turn a brown colour, and die. It is a strange sort of plant with some characteristics of the gymnosperms which produce cones, but it also has some similarities with the angiosperms which have flowers. It is, in brief, a sort of very ancient ring in the chain of botanic conjunction. Nevertheless, what makes these plants truly exceptional is their venerable age which, in many cases, exceeds a thousand years.

The Ibex of the dunes
While the botanical plants are noted for their great age, zoology has a surprising array of specimens of rare beauty and an extraordinary way of using strategies of adaptation and not just of survival such that, if they were removed from the desert they would die. Among the foxes and black-backed jackals, it is also possible to spot one of the most elegant gazelles of Africa: the Oryx. It has an incredible way of living in harmony with the desert: it eats mostly at night to capture the moisture contained and deposited on the surface of the plants. 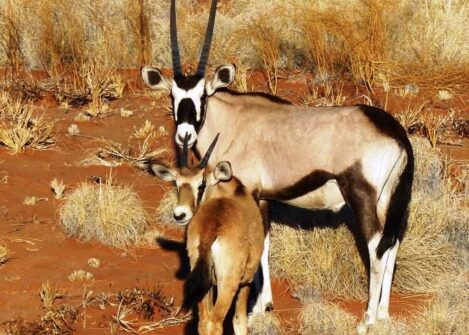 The silhouette of its head and long, straight diverging horns makes it a symbol not only of the Namib but of the spirit of all of Africa.
Due to its bodily structure and its large shoulder muscles, it is able to run for long distances over the sand. Its body shape, and the colour of its fur, enable the Oryx to expose a smaller surface area to the rays of the sun at its highest point.
Not even the white stains on the face and legs are accidental in that the opposite reaction to heat facilitates the circulation of the blood. The Oryx is often sighted wherever a blade of grass happens to sprout on the surface of the dunes.

Nature without borders
That same fog, so precious for the life of many living species, following its more insidious characteristics, has led to the shipwreck of many vessels. The numerous remains of shipwrecks have given the coastal area the name of Skeleton Coast, sinister both in name and appearance: it is a coastal area where ancient hulls mark the graves of a watery cemetery among the crashing of the waves and the creaking of decayed and water-logged timbers. 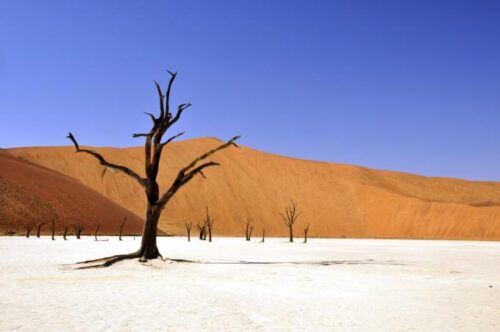 Some of the wrecks are to be found just a few metres from the coast, witnessing the fact that the desert is slowly expanding towards the west where the sea once was. In this African country, it is nature, not man, that reigns supreme. It supports very little agriculture and demands the importation of massive amounts of essential goods from South Africa. It is a concentration of free apices and vastness.
The beauty of this country may be appreciated in all its dimensions by flying over Namibia in a light aeroplane. Once the fog has dispersed, it is possible to follow the dividing line between the foam and the sand, looking down upon chalky white rocks that look like snow, and lines of dunes twisting like serpent tails. The best way to view the Namib is from above. Looking down, one can really appreciate the gulfs of dunes as they meet the sky, and the endless escarpment flanked by a sea of dunes and the foaming crests of an unstoppable sequence of waves.

Fossil forests
The simplicity of its etymology expresses more than many words in the nama language: sossus means ‘the place where the water collects’, and vlei is a South African term that means ‘a hollow place that fills with water during the rainy season’. The area of Sossusvlei opens up among the dunes and gives one to understand that, in the past, the area was regularly flooded with water, the reason why in some areas deposits of silt have accumulated which gave their origin to the gleaming white pans (saline pools). In the course of time, the dunes invaded much of the base, leaving some areas uncovered that remained miraculously free, though surrounded by mountains of sand, due to the favourable winds. 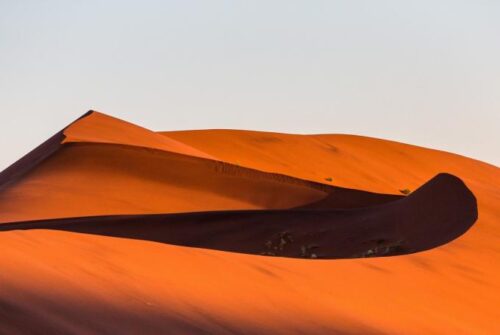 Among the many, the one that leaves one breathless is the Daedvlei. The name refers to the acacia trunks that dot the landscape, the remains of an epoch when water was plentiful, and vegetation flourished. They are, as it were, petrified and stand out against the white of the ground and the dark red of the sand in the background. Contemplation is the only suitable way to react to this place which the soft winds, the dry air and the absence of insects and microorganisms have kept intact for at least six hundred years. Looking at the forms of the bare trees, it would seem the called-for rains ought to pour down at any moment.