It is commonly known as Jamun or Jambul. It is a multipurpose tree which is highly valued for its medicinal uses, edible fruits, strong heavy timber and good fuelwood.

Its use as a source of medicine is dated back to thousands of years ago. Syzygium cumini can grow up to a height of about 30m and in most cases it can have multi-stemmed branching. The bark is rough, cracked, flaking and discoloured on the lower part of the trunk, becoming smooth and light-grey higher up. Its leaves are evergreen and have an opposite pattern of arrangement. The flowers are fragrant and appear in clusters.
The fruit is green when still young, but turns purple in colour when fully ripe.Syzygium cumini is referred to variously in the African local languages. In Uganda, for example, among the Bantu speaking people especially in Buganda, it’s called jambula. In Luo, especially in Acholi, the plant is referred to as kanu or jambula. In both Kenya and Tanzania, the tree is generally referred to as mzambarau. 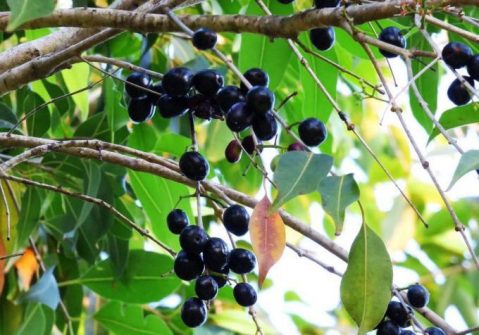 Although it is not as popular as many other fruits, Syzygium cumini has many health benefits. The fruit has an enticing sweet-sour taste and can be eaten raw or made into tarts, sauces and jam. The fruits are loaded with a wealth of important phytochemicals and nutrients including jambosin, flavonoid, antioxidant, vitamin C, salt, sugar, among others. The fruits, leaves, barks and seeds of this unique plant can be used for a myriad of health conditions. One of the best medicinal benefits of Syzygium cumini is its anti-diabetic properties exhibited by the phytochemicals in its fruits and leaves. The jambosin phytochemical plays an important role in converting sugar in the body into energy hence keeping the body blood sugar level in balance. In fact, it reduces the symptoms of diabetes such as  frequent urination. In some communities, the extracts from the bark, seeds and leaves are also used in the treatment and management of diabetes. 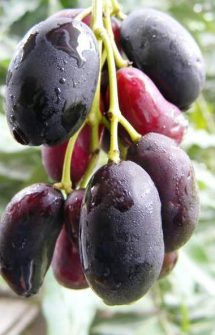 The fruit of Syzygium cumini contains lots of antioxidants and vitamin C. Hence, regular consumption of this unique fruit can be very helpful in forming collagen cells which are a vital part of our skin. Indeed, it rejuvenates the skin by forming new cells to replace the damaged and old cells. Again, the fruit of Syzygium cumini can be very helpful in preventing the risk of cancer in the body. This is due to the fact that the fruit is endowed with a lot of anti-oxidants including polyphenols which scavenge away the free radicals which can trigger cancer in the body and maintains normal body cells.
Its fruits are also known to have very strong ant-bacterial effects. Consequently,  regular consumption can help prevent diarrhoea, skin and mouth infections, including other disease conditions such as digestive disorders, cough and gum diseases which are mainly a result of bacterial activities. For some people, the fruits can also be eaten as tonic to increase sexual activity. The vinegar from the fruits is used to reduce enlargement of spleen, for diarrhea and for the people who have urine retention problems. 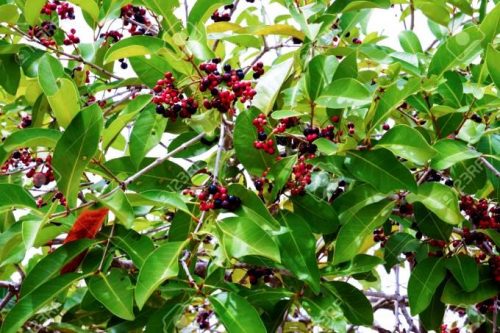 In some communities, the decoction made from the mixture of the fruits and leaves is used to treat mouth sores, tuberculosis and stomach ulcers. The dried fruits can be added to porridge and used as a cure for stomach ulcers or its decoction, administered at regular intervals, for the treatment and management of asthmatic condition. It is also reported that daily eating of the fruits can be a cure for severe cough condition. The crushed seeds can be mixed with milk to make a paste and topically applied to treat acne condition.
Regular eating of Syzygium cumini fruits supplies an abundance of potassium; a key element in keeping our heart healthy. So, a sufficient amount of the fruit intake is beneficial in keeping heart diseases, high blood pressure, stroke and artery hardening at bay. The fruits also consist of nutrients like calcium, iron, potassium and vitamin C which is important in strengthening the bones and may prevent osteoporosis and other calcium deficiency problems. These numerous health benefits of Syzygium cumini clearly explain why in India it is referred to as the ‘Fruit of the Gods’, a fruit of significant importance in Hindu mythology.