Especially present socially with its work among street children, immigrants and, more recently, the disabled.

The church is a tall building and modern with an elliptical facade in grey stone and crowned with a very high cross. The construction of the Catholic Cathedral of Our Lady Mother of the Good Shepherd in Djibouti City was commenced in 1957 by the Alsatian architect Joseph Muller, on the spot where the church of Saint Joan of Arc once stood. The church was consecrated on 12 January 1964 by Cardinal Eugene Tisserant, then Dean of the Sacred College of Cardinals. The very structure of the church itself is meant to be a sign of Christian presence where 97.8% of the population are Sunni Muslim. 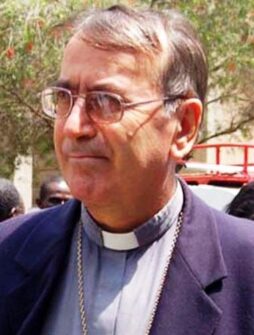 The Catholic Church has been present in Djibouti since 1885, with the arrival of the first French Capuchin missionaries. Catholics now number between five and seven thousand, almost all foreigners. The Catholic community is mostly present in Djibouti City where, in fact, two thirds of the entire Djibouti population live.
“We are just a tiny presence, a tiny seed of hope. In Djibouti City, there is only one parish with four chapels where the main activity is that of the school. The Christian community is composed mostly of foreigners”, Mons. Giorgio Bertin, a Franciscan, tells us. He has been the Bishop of Djibouti since 2001 and is also Apostolic Administrator of Mogadishu.
Djibouti (23,200 km² ; 950,000 inhabitants), a small country much of which is covered by semi-desert, seeks to extract as much economic benefit as possible from its geo-economic location on the trade routes to and from the Mediterranean through the Suez Canal, and also from its geopolitical position at the crossroads of influence on the Horn of Africa and on the Arabian peninsula. Mons Bertin comments: “Various international actors have taken positions in Djibouti for the purpose of pursuing their political, military and economic aims. Their presence ensures a considerable income for the country. If we take the example of China, with its large presence in neighbouring Ethiopia where it has various economic projects, it is in its interests to have a presence here to guarantee access to the continent”. 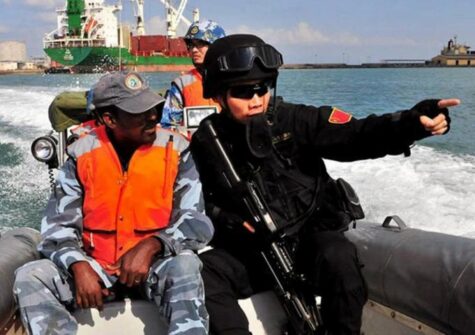 China has a military base in the country.

The Bishop continues: “Djibouti is a militarised area. In recent times, much has been said about the Chinese military base that has developed to become the largest in Africa. China pays $20 million a year to have the military base in the country. This is true but we must not forget that there are also six other military bases here. The ‘historic’ base belongs to France, the former motherland; then there are those of the United States, which pays $63 million annually for a 10-year lease of the area and afterwards, with the stated objective of combatting piracy, those of Italy, Japan, Spain, and Germany. The latter two are within the French base. Economically, the country lives off these bases that benefit the coffers of the state and provide jobs”.

Social Involvement
The Catholic Church in Djibouti is deeply involved socially.  Caritas assists the poor and the migrants, offering free medical care in the Catholic clinic. For years it has been running a project in support of the communities of the hinterland, especially those affected by drought.  Caritas is also involved with street children. Djibouti attracts immigrants mainly from Ethiopia and Yemen. A very large proportion of these are children aged from 6 to 18, who leave their homes to undertake a long and dangerous journey. When they reach Djibouti, they have to learn how to survive on the streets. 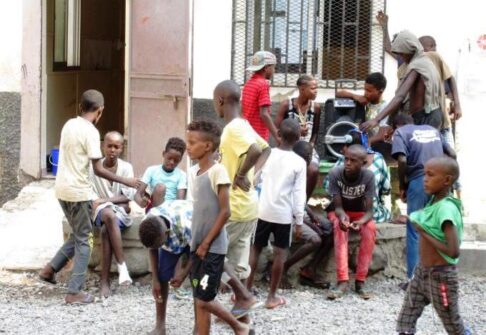 They are obliged to earn their living by collecting plastic bottles that they sell for a few cents, by washing cars or polishing shoes. They sleep in the open, often on the beach. They keep together in groups for protection. Many of them sniff glue and take marijuana in an effort to bear their inhuman living conditions. Djibouti Caritas opens its doors every morning to anything from 80 to 200 street children. They come covered in dust and sand, tired, wounded and hungry to the Caritas centres where they can wash, receive a change of clothes and some food, and have their wounds seen to in the infirmary.
The Bishop points out that activities have been reduced due to the Coronavirus. He says: “We lack sufficient volunteers for the service we offer the street children through Djibouti Caritas and so we have had to reduce our work. We decided to look after 80 children at the parish”. 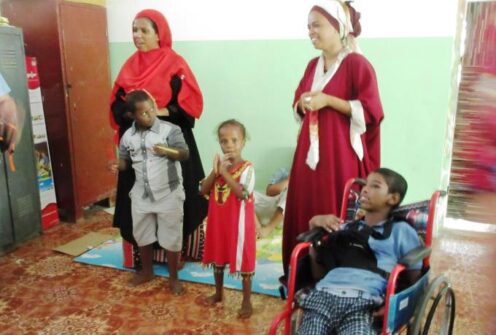 One project very dear to Mons. Bertin is that of caring for the disabled. He tells us:  “We are very committed to the disabled. The role of the Church is not simply to do things but to open people’s eyes, to reawaken the concern of and for the least in society. This is our mission! At first, we were thinking only of the physically disabled (the blind or deaf people) while the rest, the psychologically disabled, were a cause for shame to be hidden away. Nothing was being done for them. Today, in both Catholic and state schools, we are training teachers capable of teaching the disabled. We have plans for the future of the disabled: together with UNICEF, we have carried out a huge amount of work in the villages to discover them in the tents and register them. In one tent we found a child in chains. The mother told us: “I had to tie him up so as not to lose him, not to punish him. If you can help him I will untie him”. From that time on, those chains became ours until we were able to free him. We have also launched a project recently called ‘School for Everyone’, which is teaching forty disabled children from Djibouti and Ali Sabieh”.