Many years ago, a local district officer gave a small plot for a non-formal school in the Mukuru slums of Nairobi. The Mukuru Promotion Centre (MCP) started and along the years has become an important place for thousands of people giving them a future and dignity. We visited the Centre.

Mukuru is one of the largest slums in the East of Nairobi. The population of the slum exceeds 100,000. The run-down place, consisting mostly of closely packed, decrepit housing units in a situation of deteriorated or incomplete infrastructure, is inhabited primarily by impoverished persons. More than thirty year ago there was no school or health centre in the slum. Some parents from the slum approached the Sisters of Mercy and challenged them to start a school for their children. Sr. Mary Killeen, the present director of MPC, was the one who met them. 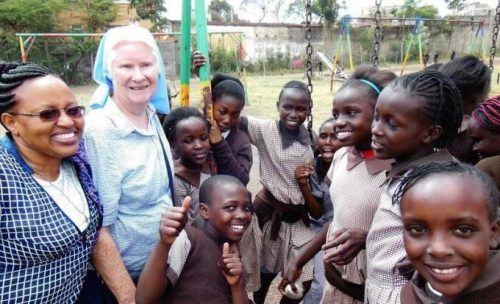 She still remembers that moment as if it were yesterday: “There were no schools in Mukuru. Nothing could be done about the problem, because there were no government funds available. So, when the delegation of parents came to see me, I told them: ‘Build me a hut and I will teach your children’”. She advised them to ask the City Council for a plot. They did not need to be told twice. The got the site and immediately built a corrugated-iron- sheet hut and went back to Sr. Mary: “We have the school, but not the teachers”. “How could we say ‘no’?”, – says Sr. Mary -. So, together with Fr Manuel Gordejuila, I began to offer education to the slum children… But it was more than that: we were witnessing the beginnings of a community development”.

The initiative grew and grew… Since 1985, when the project started thousands of children have been accommodated in several separate schools, together with multiple other projects, covering health care, skills training and community development. The organisation still operates under the direction of the Sisters of Mercy of the Kenyan Province, who are now supported by a Board of Management. A score of management team and other office holders surrounds Sr. Killeen. 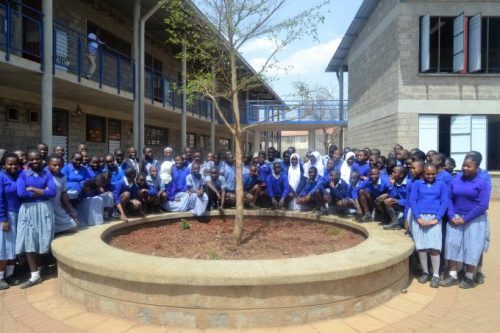 With Sr. Lillian we went around to see the various initiatives of the MPC. She is in charge of the Child Protection Department. “When it all began, all over this place children were either loitering in the streets or engaging in small businesses, like selling groundnuts, to make ends meet. We began with a bunch of boys and girls. Today we are caring for thousands of them. That first initiative expanded with other projects, even outside the world of education. There are so many people around us in need of care and love!”.
Primary school education is still the flagship initiative of the Sisters. “Even though the government of Kenya now financially supports primary education in the four schools initially started by us, we still assist in their running: we provide additional teachers and funds to enable students to participate in extra-curricular activities, such as music, sport and occasional outings”.
The four primary schools run by the MPC have an attendance of above 5,500 pupils. Each pupil is provided with lunch every day. The World Food Program supplies the food. The children are also served porridge during break time every school day. These meals keep children in school, because back at home their parents rarely get food.
Kabaya Primary School is located in the very heart of the slum. Sr. Lillian tells us: “This was the first school to be constructed. In 1985, it had an enrollment of 200 children. Today it caters for over 1,200 children”.
The St. Bakhita’s Primary school is located on the same site as the Head Office and the Skills Training Centre. It has an enrollment of about 1,000 pupils. The classrooms are built of iron sheets. Sr. Lillian comments: “Access to the school has been improved with the recent completion of the road and new bridge over the Ngong River. The river remains heavily polluted, because of the rubbish and sewage that are dumped into it. With one of our partners, Child Fund Kenya, we are implementing a safe water program in this school along with the other MPC schools”.
“This is the largest of our primary schools”, says sr Lillian when we enter the compound of St Elizabeth Primary School, Lunga. “It was started in 1991. It serves over 1,300 pupils”. St. Catherine’s Primary School has an enrollment of about 1,000 children. It is situated on the same site as the Mary Immaculate Clinic and the Mary Immaculate Rehabilitation Centre. 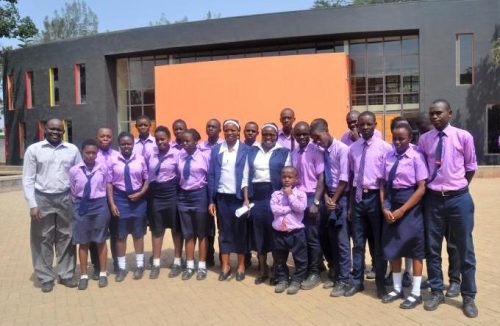 In 2008, St Michael’s Secondary School was inaugurated. Today it is a two-streamed and mixed day school, with a population of above 360 students, all from Mukuru slums. They are all offered lunch every day. Sr. Lillian explains: “For a long time we kept faithful to our primitive inspiration: to provide basic education to as many children as possible. For those who finished primary school and could not afford to pay for secondary education, we first created a sponsorship programme, but eventually we decided to have a secondary school open to our children who passed the KCPE exams”.
The numbers, however, show clearly that the MPC is still targeting the children of the slums. “We literally recruit them. In each of our primary schools, we have an office for social workers whose work is to go around the slums looking for and inviting the children loitering in the streets to come to school and get education, either formal or informal. This enables them to make a difference in their lives. They are instructed to look also for anyone who wants to learn, to improve his or her life. Or even anyone who is looking for help”. 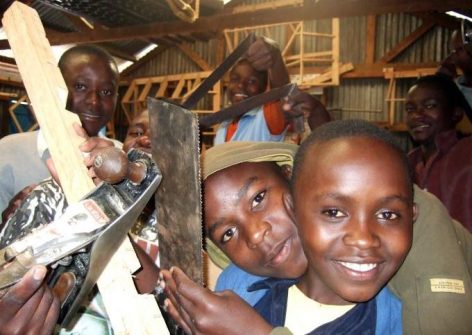 There are many other initiatives that the MPC has launched. For example, Our Lady of Mercy Vocational Training Centre. It is a a vocational training centre, where children can learn practical skills which help them to earn themselves a space in society. Another, like  the Adult Education Program is intended to give education to adults who have never been to school.Mary Immaculate Rehabilitation Centre instead was established in 1995 for street children, and today it assists around 65 boys who participate in the year-long program. Mary Immaculate Clinic was initially set up to cater for the families of the pupils and students who attend the MPC schools. Now the clinic is open to all residents of Mukuru slums.  The Community Based Health Service provides daily primary health care to residents in their own slum villages.
Sr Lillian concluded: “It is easy to encounter in town receptionists, secretaries, craft instructors, teachers and social servants who, years ago, were street children.  And now they are qualified people with a future in their hands. Many of them have passed through the  Mukuru Promotion Centre. We hope to continue to serve our people and give hope  and dignity to them”.