The trade in human hair in the wig-makers’ salons is becoming a business worth millions of dollars. There are many orders from India. The role of the Hindu temples.

“Real hair, not artificial hair, is very much in demand –  the young barber tells us. Every woman dreams of having a full head of long hair”.  The best product comes from India. People who sell hair extensions agree on the fact that hair from China or Africa is not suitable for European women. “Indian hair corresponds better to the basic structure of European hair since it comes from the same genetic branch”, an expert in the sector explains. “This is why untreated hair from India is imported. 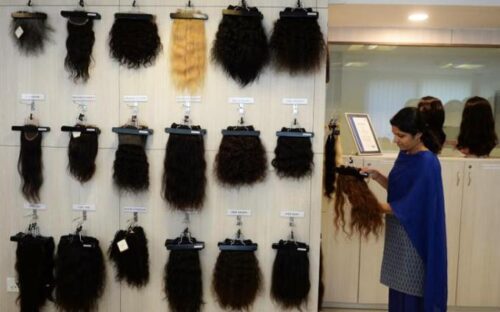 The hair is also popular because “most Indian women do not use products to style or colour their hair which keeps their hair strong, beautiful and intact. It is the type most in demand and therefore more desirable for the hairdressing industry”.
The religious and cultural background facilitates the abundance of hair from Indian temples.
Father Victordass Athistaraj, an Indian expert in Asian religion explains: “Millions of Hindus sacrifice their hair in the temples every year. By cutting their hair, they believe they are donating part of themselves to the gods”. He speaks to us of the Hindu temples of Tiruttani and Tirupati where tons of human hair are collected every month. 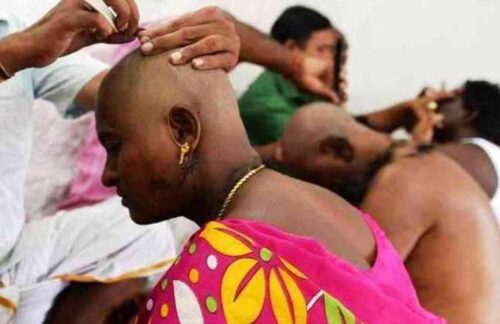 The temple of Tirupati, on the summit of Mount Tirumala, in the southern Indian state of Andhra Pradesh, was built in the year 300 and is considered the biggest place of pilgrimage in the world. Between 25 and 30 million Hindus visit it every year. According to local estimates, 75 tons of hair are collected yearly in the temple for a net value of around three million dollars.
The hair business involves all the temples of the south and the sacred cities such as Varanasi, Haridwar, Allahabad and Vrindavan. However, the locks of hair donated in the temples make up only twenty percent of the hair that comes from India and it is feared that the rest is the result of violence and intimidation.

“I hope my daughter gets well again”
We are at Shani Mahatma, one of the most ancient  temples, situated in the state of Karnataka in south-west India.  We watch as a woman wearing an orange-coloured sari enters the temple carrying a little girl in her arms. “I have come to the temple today because my daughter is disabled”, she whispers. “She is four years old and cannot walk.” The mother and child have walked for two days from their little village. It has been a difficult journey.
Father Victordass says: “ If you are well off, you give some money or animals to the gods. It is only the women belonging to poor castes who mainly donate their hair. They have nothing else to give”. 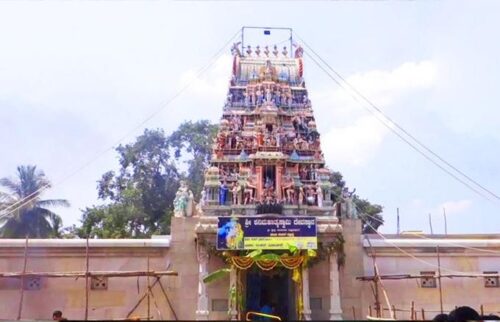 The woman goes into the salon where barbers dressed in white are waiting for the devotees. The woman sits down. The barber has tied the shoulder-length hair of the woman into two braids. With two swift cuts the splendour of her hair falls to the stone floor. She then says: “I hope my daughter gets well again”. She is a graceful woman and is very devoted. Slowly, with her child in her arms, she re-enters the temple with her close-cropped head. She bows down and continues to pray. She eventually gets up and starts her journey back to her village.
There are various reasons why people go to the temple:  the young families thank the gods for the birth of their child; the peasants sacrifice their hair after a good harvest; the young men pray for a good job. However, where there is sickness or misfortune, people donate their hair. Little by little the stone floor is covered in hair. Most of the hair cut off in temples,  like those of Tirumala-Tirupati and Shani-Mahatma, are sent to Koppal in the middle of the Indian desert.

A Visit to Koppal
With the proper permission we entered a great building in Koppal protected by security guards. We cross the courtyard where workers are drying hundreds of braids of long hair. We then move to a large shed where workers use large forks to move large bales of grey-black hair. Our guide tells us: “These bales have been discarded as they are
of poor quality. Then he proudly adds: we only export goods
of the finest quality”. 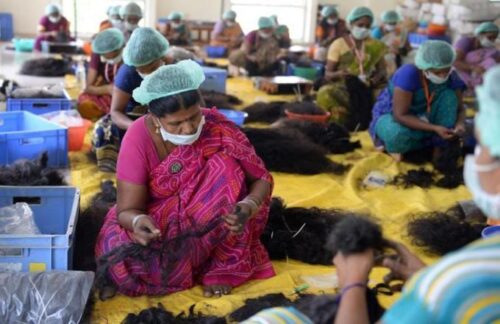 Finally we are led into a large hall. The younger workers crouch on the floor in front of a sort of upside-down rake. They arrange, clean and comb the hair of the thousands of temple visitors. At the end of the long production line, our guide proudly shows us some extension samples. They are packed in large boxes with an inscription in English: “First Class Human Hair. Product of India”. He invites us to feel the quality of the recycled hair – black, brown, blonde and red. We have to admit that the hair feels soft and natural. There is also a market parallel to that of the temples and that of the well-known brands: that of the discarded hair. Once a month, the ‘hair gatherers’ come to the Indian villages to collect the hair that comes away with the combs and is saved by local women. The spoiled and twisted hair is sold for a few rupees. “We do not deal in this market –  our guide tells us  – the hair follows different channels and is sent mostly to China where a lower quality of hair is used”. 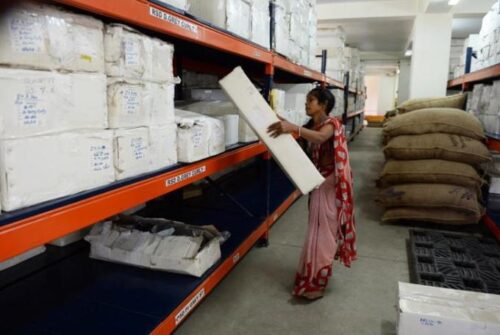 Today, India exports two thousand tons of hair a year. One ton represents the hair of three thousand women. This means that, in India alone, every year, six million women are deprived of their hair more or less voluntarily. The value of the hair is estimated to be around 250 million dollars a year.
The demand for natural hair far exceeds supply and there is no sign of it diminishing. According to Philip Sharp, manager of one of the most famous companies in the world producing wigs and hair extensions, ‘Great Light’, hair has become a consumer material on a par with gold, diamonds, and oil.
We leave the hair factory and make our way towards one of the villages close to Koppal. Father Victordass informs us that there are thousands of people working at the hair factory. There is also something that everyone tries to hide: child labour. The middlemen take advantage of the poverty of the families in the region of Koppal by taking sacks of hair to the huts of the poor. It is there that the cleaning, sorting and combing takes place. Having the hair processed in the villages cost much less than in the factories. Father Victordass comments: “The work in the villages costs the equivalent of one Euro a day. I know some families where the children as young as five or six help their parents to wash the hair”. Father Victordass points out that many boys and girls suffer damage to their health because of handling dirty hair. 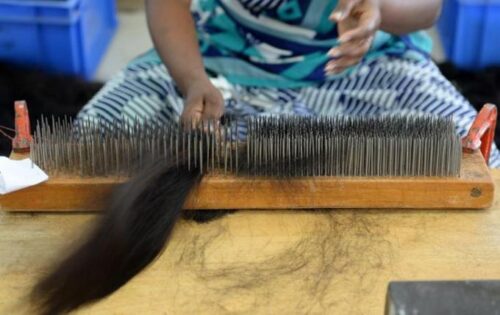 We then met Shanana sitting on the floor of her hut in front of a great heap of hair. He has no idea how many sacks of hair she has processed in recent weeks. She is fourteen years old. Her work starts in the morning before going to school and continues in the afternoon.  She even works during the school holidays. The few rupees she earns go to helping her parents. “I use the money to buy schoolbooks and something to eat”, Shanana says.
Shanana’s great dream is that one day she will become a doctor. “I want to help my community because many of them are suffering and besides that I would like to help the young people find a better job than the one I have now”.