In 1917, ownership of the region of Karabakh was claimed by the new-born republics of Armenia and Azerbaijan following the Russian revolution that caused the decline of the Empire.

This territorial dispute saw the intervention of the victorious powers after the First World War, especially the British who had a sort of protectorate over Transcaucasia. Substantially, they supported the Azerbaijani pretensions so as not to offend the Muslims, co-religionists of the Azerbaijanis and present in large numbers within the British Empire. They also tried not to offend the Armenians, committing themselves to keeping the promise of the victorious powers which had been hit hard by Turkey through genocide. This consisted of agreeing, in case of victory, to vast territorial compensations with the surrender of those territories which, under the control of the Ottoman Empire, constituted Turkish Armenia. Therefore, Armenia, when annexing these extensive territories to the west, could also have given up Karabakh in favour of Azerbaijan. However, subsequent events took a different turn. 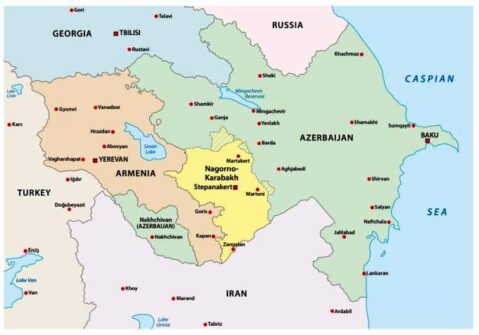 In 1920, the Soviet power took over the Caucasus and the victorious powers of the First World War were forced to go back on their promise to allow the annexation of Turkish Armenia by the Armenian Republic. Caught in the crossfire of the Turkish-Soviet alliance, Armenia had not only to give up the idea of annexing the Turkish territories but even had to cede its own territories to Turkey.
In 1921, the Soviet government, under the command of Stalin, not wishing to make an enemy of the Muslim populations, decreed the annexation of the region of Karabakh by Azerbaijan under the condition that it would be recognised as administratively autonomous. This was also intended to prevent national groups of the Empire from acting as single entities capable of co-opting key sectors of every ethnic minority. In fact, such recognition came about two years later with the creation of The Mountainous Karabakh Autonomous Region which, however, excluded vast territories densely populated by Armenians. Meanwhile, the Azerbaijani government was implementing a policy of demographic growth in the region to the detriment of the Armenian population.
With anticipation, after the campaign against religion launched by Stalin, all the Armenian churches were closed, and priests were either imprisoned our laicised.
Within a few decades, the Armenians, who in 1920 comprised 94% of the population, were reduced to 75% in the early eighties, while the Azeris had increased from 5% to 24%. 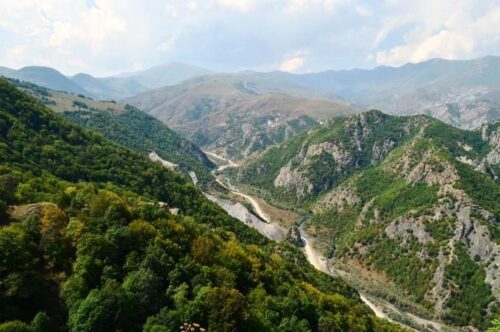 A view of the forested mountains of Nagorno-Karabakh. CC BY-SA 3.0/Sonashen

It was in that period of time (1920 to 1980) that numerous unsuccessful requests were made by the Armenian population of Karabakh for its annexation by the Armenian Soviet Republic though in January 1988, with the coming of Gorbachov’s Perestroika, the Armenians of Karabakh sent a petition to the Kremlin (with 100,000 signatures) seeking a referendum on the future state of the region. As it happened, their request was again rejected and on 20 February 1988, the Soviet of the Deputies of the People of Karabakh approved a motion seeking the union of the region with Armenia. On 15 August 1988, the Armenian Supreme Soviet accepted the request of Karabakh, but it was rejected both by Azerbaijan and the Kremlin. Things remained so until 1991 when the Soviet Union was dissolved.
In April of that year, the Azeri government with active participation on the part of the Soviet armies, commenced ‘Operation Ring’, to complete the work of ethnic cleansing of Karabakh, with partial success in the north of the region. On 30 August of the same year, Azerbaijan proclaimed independence from the USSR. Three days later, at a joint sitting of the Regional Soviet and District Soviets of the region, the secession of Azerbaijan was decreed and, contemporaneously, the Mountainous Republic of Karabakh. This took place on foot of an article of the Soviet constitution according to which, if a Soviet Republic (like Azerbaijan) decided to detach itself from the USSR, the republics or autonomous regions within the secessionist republic (in the case of Karabakh) would have the right to detach themselves from it. Later, in December of that year, a people’s referendum approved the constitution of the Republic of Mountainous Karabakh. 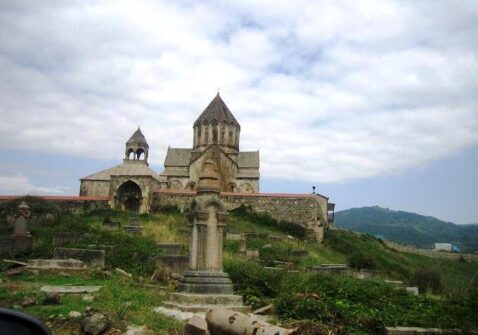 Ancient Gandzasar monastery in Nagorno – Karabakh was targeted by Soviet forces during the “Operation Ring”.

Obviously, as a consequence of these acts, there was an increase in tension between Karabakh and Azerbaijan since Azerbaijan, having been excluded by Karabakh, waited to restore its own authority. In this line, the Azeris set up a complete blockade around the contested region, and launched a real military offensive with frequent shelling and aerial bombing of populated centres. Between 1992 and 1994, the Armenian guerrillas who in the meantime had become organised as the regular army of the new republic, tried to counterattack. In this they succeeded in reaching the Armenian border and in winning the strip of land close to the former Autonomous Mountainous Region of Karabakh, the source of bombings of populated centres. Concerned at the continuing war situation, the foreign ministers of the OSCE (European Organization for Security and Cooperation) member states decided to call a peace conference at Minsk (Byelorussia) in March 1992 with the participation – apart from Armenia and Azerbaijan – of Russia, the United States, France, Italy, Germany, Czechoslovakia, and Sweden. 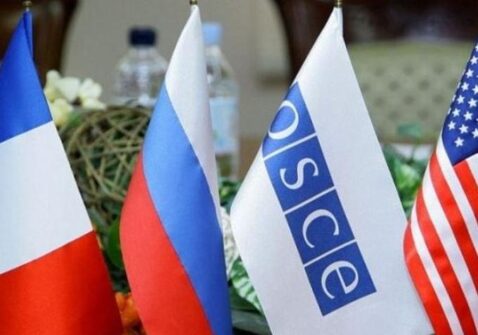 After several attempts at bringing about a ceasefire, an armistice was agreed for May 1994 which, nevertheless, did not resolve the fundamental territorial dispute that had remained latent for around 25 years only to explode violently with the two parties to the conflict – Azerbaijan and the Armenians of Karabakh supported by Armenia – appealing to such different principles that rendered reconciliation difficult. Azerbaijan, on the one hand, based its requests on the principle of the integrity of borders and, on the other, Karabakh emphasised the principle of the self-determination of peoples which, in light of the value of democracy propounded by the international community, ought neither be avoided nor contradicted. It is furthermore important to point out that, in the 1990’s, unlike 2020’s, the conflict played a completely marginal role in terms of a geopolitical profile. Proof of this can be seen from the fact that there was no great involvement on the part of foreign powers, especially Russia and Turkey. The latter, in fact, limited itself to certifying, in May 1994, the conquest by Armenia of all of Nagorno Karabakh and seven adjacent districts, including the strategic Lachin corridor connecting the disputed region with Armenia; at the same time, the Minsk group took no significant measures. Open Photo: © Can Stock Photo / rawf8 (F.R.)