With a population that is 70% ethnically Malayan, Brunei has been under the influence of a much more rigid version of Islam as compared with bordering Malaysia and neighbouring Indonesia.
The situation leaves little room for religious freedom for other faiths, especially Christianity, of whatever origin, be it Chinese,
tribal or immigrant.

The problem is that, in the sleepy little Sultanate, the situation created by the immense riches of the reigning family, the many opportunities granted by it to its members and a past that has been filtered more by gossip than the proper management of the country, is in danger of exploding. This is due to the contrast between immoral individual and social behaviour and the severity of the sentences inherent in the integral application of Sharia Law. While it is true that, despite the many guilty verdicts for drug trafficking and premeditated murder, not one sentence has been carried out for more than twenty years, it is also true that more liberticidal and discriminatory aspects of the law are still unfortunately present and well known. Observable, for example, in terms of ostracising the LGBTQ community. 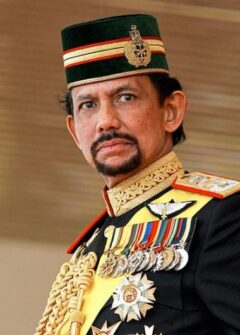 Hassanal Bolkiah is the 29th and current Sultan and Yang di-Pertuan of Brunei.

The ruling house abundantly benefited from the guaranteed wealth from petroleum until Hassanal Bolkiah decided to limit his own power and expenditure as well as that of his relatives and to raise national dignity and the public coffers of a country over which he has almost absolute power. After its complex and often-delayed launch, the controversial penal code based on Sharia Law has been applied gradually but with contradicting results. Difficulties immediately emerged starting with the scarcity of lawyers capable of running tribunals and making sure that fair and impeccably legal judgements could be reached.
Of the 103 lawyers who were qualified and registered to operate in the ambit of law inspired by the Islamic faith between 2003 and 2013, only 16 applied to operate in the Islamic tribunals. This number was considered ‘insufficient’ in the same juridical environment, bearing in mind that, according to Ordinance 2013 of the Sharia penal code, they are asked to play an important role in the debates in favour of correct and effective sentences.
In fact, by law, the lawyers specialised in Koranic law ought to make up at least half of those registered in each tribunal, but an enquiry into the reasons why a lawyer ought to specialise in Sharia Law showed that this branch of the profession had little to attract the professionals.
The new regulations have been gradually extended until they took the place of the preceding code that was less harsh and, especially, carried punishments that were less severe.  It has been already been in force for some time in civil ambits such as family law. On paper, the provisions are the same severe and archaic measures applied elsewhere including mutilation for thieves, flogging for crimes that include abortion, and the use of alcoholic drink and stoning for such crimes as adultery and sodomy. These laws are seen as excessive even for the inhabitants, most of whom are Muslims, who live together with a large immigrant population so necessary for the functioning of the country and the needs of businesses and families. 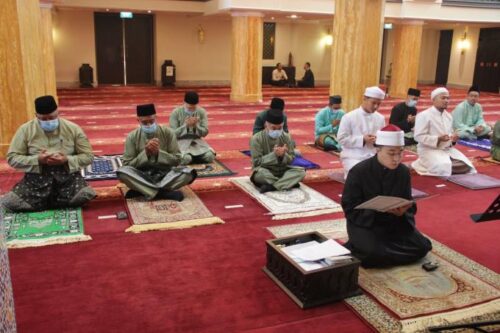 On the whole, the new sentences, said by the Sultan to be ‘a barrier against negative external influences’, have been greeted with deep scepticism and, for the first time, by a veritable wave of protests on the social media, avoiding official censorship.
At the promulgation seven years ago, the Sultan had specified that the application of Islamic law had been in the pipeline at least as far back as 1996, and that, only by the “coming into force of the present law, we fulfil our duty to Allah”, Hassanal added.
However, that may be, despite having a standard of living higher than that of many of its neighbours and British influence, today the country proposes a form of Islam that is less tolerant than that of its regional partners Malaysia and Indonesia (the latter has the largest Muslim population in the world), strictly limiting the presence of different faiths, the prohibition of alcohol and the rigid application of moral rules. To all appearances, it is a situation that serves the image the monarchy would like to convey of itself, the acquisition of a different role in the region and also its lucrative relations with the petro-monarchies of the Gulf. 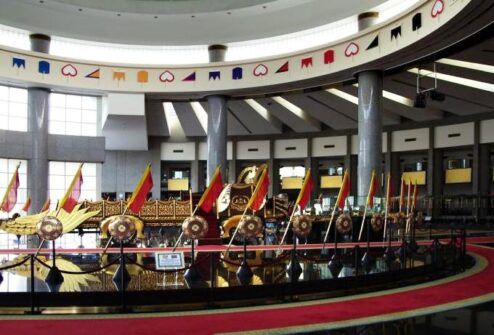 The Royal Regalia Building – Located at Jalan Sultan, this museum is devoted to the sultan Hassanal Bolkiah.

The first difficulty has been and remains that of explaining the fundamentalist move as not only in the primary interests (unity, stability, wealth, investments and control) of the monarchy which, perhaps not without good reason, given its increasingly close relations with Saudi Arabia, the sovereign had defined as ‘a firewall against globalisation’, doubtless in view of controlling his subjects. It was not by chance that, at the first sound of dissident voices against the introduction of Sharia Law, his warning, expressed in a message handed to the official media, was clear: “Our denigrators cannot continue with these insults. If there is evidence to justify taking them to court, then the first phase of implementing the Islamic penal code will certainly be applied in their case”. It is not mentioned which of the media are referred to, but in a country where the traditional media are strictly controlled, and where the number of those interned is among the highest in Asia, it is probable that the target was the great network and its instruments of communication as part of a broader form of control and the stabilisation of power. (S.V.)