For years now, tens of thousands of tons of electric and electronic material have been poured into the continent resulting in environmental pollution and damage to people’s health. Now, Kenya, Uganda, Tanzania, Rwanda, Burundi, and South Sudan
have banned such imports.

On 1 June 2022, countries of the EAC, the Community of East Africa (Kenya, Uganda, Tanzania, Rwanda, Burundi, and South Sudan), will prohibit the import of used electric and electronic appliances (e-waste). The unanimous decision was taken on 12 November in Arusha, Tanzania, where the regional organisation has its headquarters. The member countries, like many other African countries, are becoming dumping grounds for computers, cellphones, televisions and similar obsolete or broken material that damage the environment and cause serious damage to health.
Africa, too, produces e-waste. It is estimated that, in 2019, it amounted to 2.9 million tons, 2.5 kg for each inhabitant. This is a minimal quantity compared to 44.7 million tons produced worldwide.
It is almost impossible to trace exactly where this mountain of refuse goes as there are no laws regulating its dumping or transport. Studies made by the European Union and the UN, however, show that a large amount is sent to Africa in different forms. Part of it is ‘donated’ because it is technologically out of date in the countries from where it originates but still usable in less advanced contexts. This transfer is legal and concerns 75% of electronic material.
However, according to a recent study, 60% of the items sent to Kenyan beneficiaries such as schools was completely useless and was immediately dumped.
The same is happening in the other countries of the area and this explains the decision taken recently in Arusha to ban such imports.
Other material is sent in a less transparent way, hidden among other sorts of merchandise. Again, according to the above-mentioned study, in Nigeria, in the period from 2015 to 2016, at least 60,000 tons of non-declared electronic refuse was brought into the country.
The countries of origin are obviously the more developed ones, especially China which accounts for 24% of the total, followed by the United States (20%), Spain (12%) and Great Britain (9%). Most often, the destination is West Africa. The largest and best-known dump is to be found at Agbogbloshie, a suburb of the Ghanaian capital Accra.
Also in Nigeria and Cameroon, there are various sites where electronic refuse ends up being dumped; they are smaller and therefore less visible and less known. The same problem, as we have seen, also affects East Africa: Ethiopia, Kenya, Tanzania, and Uganda in particular. 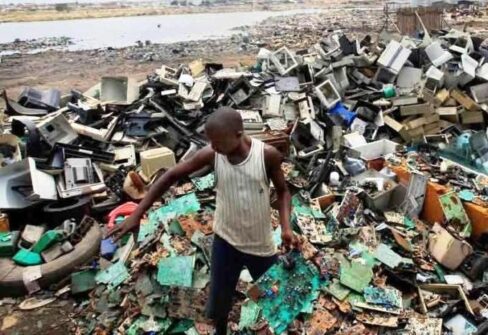 The alarm has been sounded because of the environmental and health damage potentially caused by many of the raw materials from which the electronic appliances are made – the reason why, in the first place, the Northern countries try to rid themselves of it by all possible means. In fact, the e-waste contains a collection of hundreds of potentially harmful substances. Among these are lead, mercury, nickel, arsenic, cadmium, and chrome, all of which are known to be carcinogenic and harmful both to the nervous system, especially in the foetal stage and during growth as well as for causing the progressive poisoning of human tissues, starting with the blood.
There are also volatile substances that cause environmental pollution and are seriously harmful to the respiratory system and that is not all. Finally, there are the leachates that penetrate the subsoil and cause the pollution of aquifers and water that is used with no preventive treatment by the population even outside the area surrounding the landfill.
Many problems are caused by the informal systems of management of the waste that are normally in daily use in the sector of African informal work. The burning of plastics, from which appliance bodies are made, for example, produces dioxin pollution.
Serious physical harm – burns, wounds, and fractures, often disabling – is also caused by acids and inadequate instruments in an environment that is already dangerous such as that of the landfill where much of the work to recuperate useful components takes place. Children are the most exposed to this danger, especially the thousands of children whose lives are spent recovering raw materials from waste. Africa has become an important centre for the disposal of electronic waste due to the general lack of adequate legislation, policies, and regulations for the safe handling of waste. In 2019, only 13 of the 54 African countries had such laws. Egypt, for example, did not and it is the largest producer. Besides, experts say that, even where laws and regulations exist, they are rarely enforced.
Similarly, the continental and regional conventions and initiatives regarding the problem have become a dead letter. The Bamako Convention – On the Ban of the Import into Africa and the Control of Transboundary Movement and Management of Hazardous Wastes within Africa – which goes back as far as 1991, was very clear about the issue but it did not help to avoid the harm derived from it. 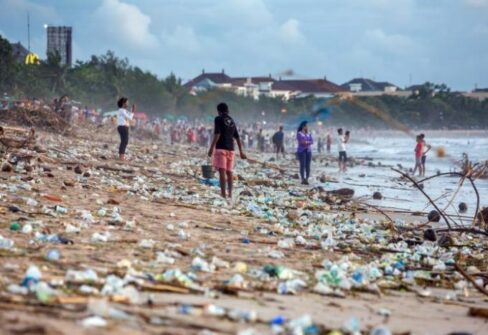 The same applies to the numerous seminars organised on the theme by EACO, The East Africa Communication Organization. Experts actually believe that electronic waste is one of the major causes of pollution and damage to health in the continent.
Electronic waste is also a source of wealth and is a growing work centre. The recovery of raw materials from waste is not economical in the northern countries of the world due to high labour costs but is very attractive in Africa where it exists largely in the informal sector with no guarantees either of remuneration or security.
Experts calculate that, in 2019, the value of raw materials recovered from electronic waste amounted to around 3.2 billion dollars. The recovery of the raw material and its marketing, apart from the recycling of reusable appliances, provides work for tens of thousands of people in Africa.There are between 4,500 and 6,000 people working directly in the Ghanaian landfill at Agbogbloshie; at least a further 1,500 work recovering materials, and 200,000 work in recycling activities. According to the estimates of experts in the sector, the country earns from 105 to 268 million dollars annually in this way.
Precious raw materials cannot be recuperated, and such significant earnings cannot be made to the detriment of the health of the population and the well-being of the environment.