“I am totally paralysed, but I feel a fullness of mind and heart that surprises me, and I dream of an accomplishment that I have
not yet experienced… This wheelchair has become the best of
the pulpits for me”.

Manuel Joao Pereira Correia was born on 27′” October 1951, in Penajoia, a village on the banks of the Douro River, in northern Portugal. He entered the Comboni Institute at a young age and went through all the required training courses, in Portugal and Spain. In 1970, he took his first religious vows.
In 1973, he was in the Comboni Scholasticate in Rome for the study of theology. He took his final vows in March 1978, and was ordained a priest on 15th August of the same year. Soon after, the superiors assigned him to the Comboni community of Coimbra, Portugal, where, for seven years, he dedicating himself to the missionary and vocational animation of young people, and to the formation of new postulants. 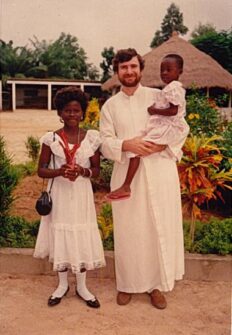 In 1985, he went to Ghana, in West Africa. He recalls: ” My first destination was Liati, in Ghana. There I had to face the real difficulties of missionary life. The mission had about thirty communities scattered in a mostly Protestant or animist context. The communities were rather small, all characterised by poverty of means and of personnel. When I went to visit them, I felt all the weight of carrying the Word of God. The smile, which I never missed, often hid the suffering I felt inside. In the end, however, I became convinced that everything is grace. Even mistakes and weaknesses. The mistakes ‘learned’ in real life are worth much more than those never made”.
In 1993, Fr. Manuel was called to Rome to co-ordinate the formation of young candidates in the Comboni Institute. He returned to Togo in 2002, where the confreres chose him as Provincial Superior of the Comboni Province of Togo-Ghana-Benin. 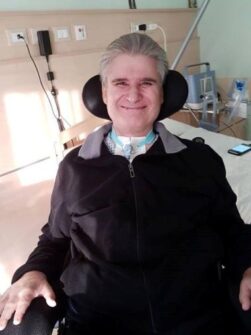 At the end of 2010, a sudden and unexpected event happened that shock him. In a letter to his friends, he explained: “Next December, I will leave Togo and return to Europe, without knowing what is in store for me. I have been diagnosed with Amyotrophic Lateral Sclerosis (ALS). It is a neurological disease, which has not yet a cure. It slowly deprives the person of muscular movements, reducing the body to become a prison of the soul and the spirit. It will follow its course and will invite – or force – me to take a different look at life.”
In another letter, he spoke of his forced return to Europe as a new opportunity and a new beginning: “I return calm and serene, certain that the Lord will continue to be faithful to the promise he made me: ‘I will always be with you, Manuel, to give meaning to your life!’ I return convinced that the best is yet to come!”
The disease progresses rapidly, affecting in particular the legs, thus limiting dramatically his movements. His mind, however, remains lucid and is far from being paralysed. His desire to work for the betterment of mission is unstoppable. He tells the superiors: “Give me a commitment in which I can still offer my contribution”. 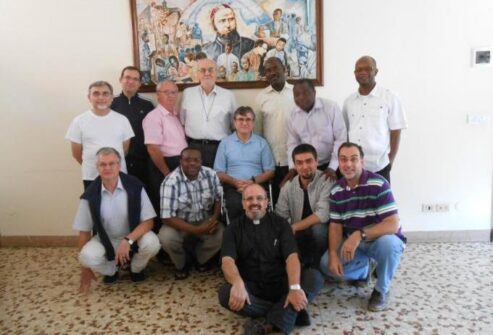 The superiors take him at his word, and assign him to the Comboni Curia, in Rome, as a member of the team that co-ordinates the ongoing formation of the whole institute.
He resists the aggressive course of ALS by moving first with crutches and then with a wheelchair, defying the stern prognosis of the doctors. His fingers are flying fast over the computer keyboard, preparing booklets and leaflets to be distributed to all confreres.
In 2016, the worsening of the disease obliges him to leave Rome and go to the Comboni Nursing Home of Castel d’Azzano, near Verona. Once again, Fr. Manuel informs friends: “Here I can be better cared for, because my inseparable companion, the ALS, will not let me go. Now I need specialised attention and treatment.” He describes the new stage of his life as “a response to another call from God to depart from my security and to embark on a new mission. This is the ‘penultimate mission’: the last one will be the one that will be entrusted to me in Paradise. I am ready and willing to live it with the commitment and generosity of the workers of the last hour of the Gospel parable”. 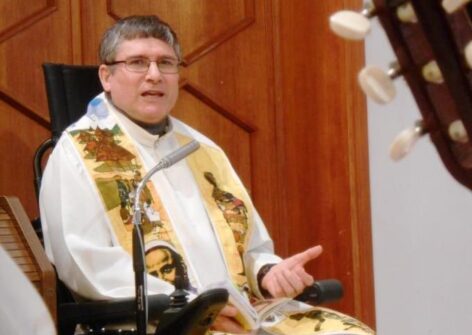 In the course of 2018, there is another ‘turning point’ in his journey. He tells his friends about it: “I had a serious breathing crisis and I had to be in hospital for four weeks. They carried out a tracheotomy on me. Now, I am breathing with the help of a machine and it is with difficulty that I can make myself understood by words. Anyway, I have not lost my good humour. I am fine. Above all, I feel serene – this is a gift that God keeps granting me, thanks to you and your prayers. Now I am completely paralysed. Yet, I can still smile. It comes naturally to me.  I am in a good frame of mind, and I praise God every day for the gift of life”.
Not being able either to use the keyboard, or to dictate, he learns to use an “eye tracking device” in order to access his computer by using his eyes as a mouse. He is enthusiastic about it: “The device, connected with the computer, can follow my eyes, with amazing accuracy, to see where I am looking on the screen. So, I can select the item I am looking at by dwelling on it and blinking my eyes. In other words, I can write with the eyes. Oh, the marvels of technology!”
Fr. Manuel’s missionary spirit is still flying, and his heart continues to expand to the measure of his dreams. He continues to smile.