From Zimbabwe to South Africa and Kenya, Women Rangers are fiercely defending wildlife against poachers.

In their camouflage uniforms and armed with assault rifles, they scour the Phundundu Wildlife area in Zimbabwe, the natural habitat of 11,000 elephants. These are the Akashinga women rangers, a name that means courageous in the Shona language.  As part of the innovative programme that bears their name, sponsored by the International Anti-Poaching Foundation (IAPF) — a non-profit organisation dedicated to combatting poaching worldwide — these ranger women protect animals in danger of extinction. The programme was launched in 2017 by Damien Mander, a former agent of the Australian Special Operations in Iraq and founder of the IAPF. In their first four years of operations, the Akashinga women achieved an unprecedented reduction in elephant poaching estimated to have been around 80 per cent, in the Lower Zambezi Valley, the area of the world with the highest concentration of these gigantic pachyderms. 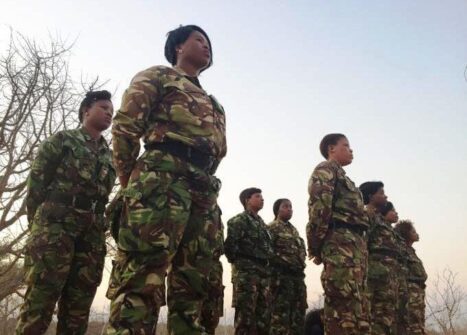 The goal of the IAPF is to hire a thousand ranger women full-time to protect a network of 20 nature reserves. The Akashinga programme now includes six wildlife reserves covering an area of 630,000 acres, almost 255,000 hectares. Currently, 160 full-time women rangers are completing their training in addition to the dozens already in service.
The recruits had to undergo hard training. “After studying the habits of the wildlife and the secrets of the environment – Damien Mander explains – the aspiring scouts have been trained to face the most challenging scenarios through the use of weapons, hand-to-hand combat and exercises in guerrilla action like those that may occur in the context of combatting illegal hunting”.
The Akashinga have also learned the techniques of patrolling and camouflage, the rudiments of first aid, arrest and search techniques, the acquisition of evidence, and crime scene preservation. In the imagination of those who know the history of Zimbabwe, the Akashinga, for their pride and ardour, remind them of Queen Lozikeyi Dlodlo who succeeded her husband King Lobegula in governing the Ndebele people in the late 1800s. She tenaciously opposed, both by diplomacy and military force, the occupation of the country by white colonialists who successively instituted former Rhodesia, now Zimbabwe. 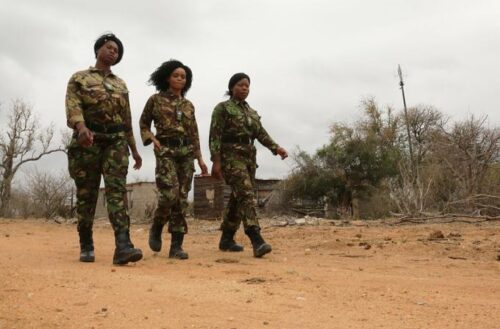 In South Africa, in 2013, to combat poaching, the Black Mamba Anti-Poaching Unit was formed; it takes its name from a deadly snake, the black mamba (Dendroaspis polylepis).  Its purpose is to protect species in danger of extinction such as the rhinoceros, the cheetah, and the wild hunting dog. Craig Spencer, head of Balule Game Reserve, a private reserve bordering Kruger National Park says: “When we founded Black Mamba, the original purpose was to defend the rhinos. Often, we had to deal with hunters from the surrounding villages attracted by the huge profits”. The rhino horn is, of course, very much sought after in the Orient as a natural aphrodisiac and a powerful healing medicine. It may be worth as much as $65,000 dollars per kilo. 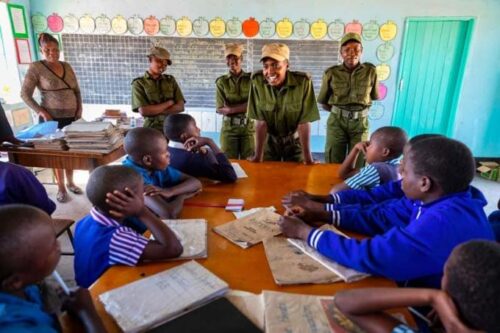 The work of the women rangers is not only to protect wildlife but also to conduct awareness campaigns. (Photo Brent Stirton)

The work of the women Black Mamba rangers is to patrol and defend the wildlife from poachers over an area of 40,000 acres of savannah inhabited not only by rhinos but also by elephants, gazelles, giraffes and lions. “Each day, we inspect the boundaries of the reserve, check the condition of the fences and examine the health of the animals”, Leitah Michabela, one of the leaders of Black Mamba, tells us.
The work of the women rangers is not only to protect wildlife but also to conduct awareness campaigns. Leitah continues: “We want our children to be able to enjoy this natural treasure. For this reason we also go to the schools to raise awareness of the need to defend nature since this is the only way we can build a future of hope”.
On the vast savannah at the foot of Mount Kilimanjaro, Purity Lakana, 23, walking slowly and peering at the ground, spots the tracks of a lion that recently passed that way. Further on, she sees a group of elephants peacefully grazing. The animals wander freely between the Maasai-owned land outside the park and in the park itself.
Purity is one of a group of eight Maasai women aged from 20 to 28 and known as ‘Team Lioness’ who form part of a team of 76 rangers of the Community Wildlife Rangers (CWR) in the Ogulului-Olalarashi Group Ranch (OOGR) guarding leopards, elephants, giraffes and other wild animals in the area of 147,000 hectares (363,000 acres) surrounding the Amboseli National Park in Kenya. They are the first group of women rangers of the strictly patriarchal Maasai community. “At first, the community thought we would not succeed, believing we are weak”, says Mary Amleset, 24, during a recent foot patrol.
“They considered this to be a work just for men and so they discouraged us … but we told them: ‘No, we will succeed, and we did’”, Amleset proudly adds. 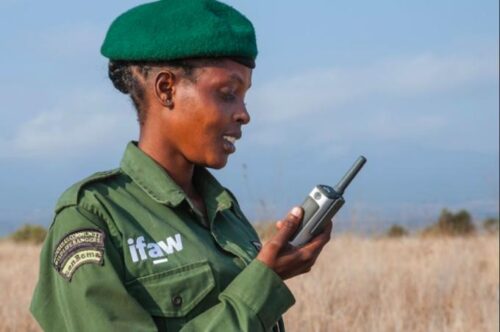 Patrick Papatiti, head of the rangers in the community of the Olgulului-Olalarashi group recalls that the idea of having an all-women group of rangers came to the fore about two years ago when he began to work for the International Fund for Animal Welfare (IFAW).
When the idea was suggested to the Maasai leaders, “they were a bit doubtful” Papatiti recalls. Despite their initial reluctance, each of the eight Maasai clans, after being well informed, sent representatives to be interviewed for the jobs. Two years on, Team Lioness has exceeded all expectations. The women have shown courage and ability, especially in gathering information.
The Coronavirus pandemic has halted the tourist industry in Kenya which provided an income for many Maasai living near the Park. Tourism usually provides almost 10% of the GNP of Kenya, with 2.5 million tourists visiting the country each year.
With no source of income, some members of the community resorted to poaching wild game, Papatiti told us. Today, the rangers are not only up against organised crime but also some of the community who have taken up poaching to survive.

The African continent at the centre of Worldwide Poaching
Africa is the continent most affected by the exploitation of protected species. Poaching represents a many-sided threat to biodiversity, a fundamental condition for human survival. The most sought-after items on the flora and fauna black market are elephant tusk, rhinoceros horn, rosewood, and ant-eater scales. The market for wild flora and fauna is controlled by organised crime. Africa, with its enormous quantity of wildlife, is the continent at the centre of worldwide poaching. 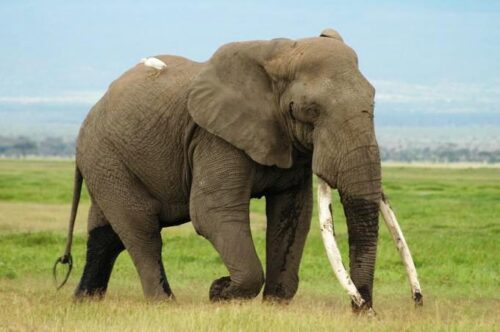 According to the estimates of the World Wildlife Crime Report, 157,000 elephants were killed illegally in Africa between 2010 and 2018, an average of around 17,000 each year. The area most stricken by these crimes is Southern Africa. 75% of the remaining rhinos are concentrated in South Africa alone where 86% of global confiscations by the authorities takes place and where, according to the latest data, in 2019, 600 rhinos were illegally killed. Africa is the continent most in the sights of the poachers and this is easily understood: the combination of the presence in the continent of many species such as elephants and rhinos together with unreliable systems of protection (often corrupt) creates fertile ground for the work of poachers. It has been said that corruption is effectively an accelerator of crimes against nature, gaining a foothold at each level of the chain of command and involving many different actors and not only police agents but also administrative personnel, part of the army and a small percentage of rangers.  Furthermore, we must not underestimate the spiral of crime that ties the poaching activities to some African terrorist groups: it is not unusual for the illegal trade in ivory and rhino horn to be used as a means of financing armed militias and supporting the terror campaigns in some areas of the continent. (Open Photo: 123RF.COM – IFAW)