In some rural areas of the Sahel such as the Mossi plateau in the north of Burkina Faso, or in the region of Atakora in northern Benin, one has the impression of never coming across a village.

There is nothing but dwellings scattered throughout the bush, apparently independent of each other; the country people live scattered over the land. Villages exist but they are not the same as a densely inhabited nucleus.
Also the Tangbas in northern Benin live scattered over the plain. The same can be said for the Betammari-be (also called Sombas) of the same region, or the Lobis in Burkina, whose houses are far from each other and do not constitute a structured habitation.
In such contexts, it becomes more important than ever to have a meeting point where one can meet relatives and friends and hear the news and gossip. One goes to the market to enjoy its social life. There is an analogous attitude among the Berbers (Morocco), in which commerce is explicitly considered of secondary importance, but no one must fail to appear on market day, even if they have nothing to buy or sell. 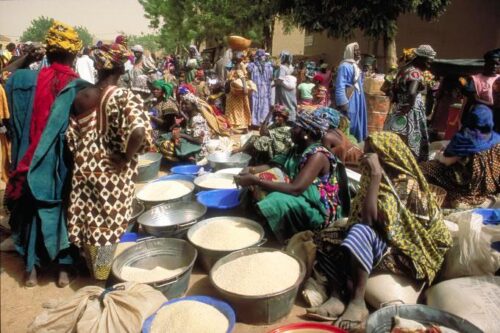 In the rural markets of western Africa, it is usually the women who do the selling while the men are somewhat more concerned with social relations. The testimony of Baba, an elderly Hausa woman from Karo (northern Nigeria): “On market day, the men of the nearby communities gather not just to sell their goods but also to meet their friends and relatives and discuss the more important topics with them. Many girls wishing to marry frequent the market dressed in their best clothes and many young men go to visit them and watch the dancing”.
The Mossi say that women leave tracks like those of an elephant – easy to find – but that those tracks are always more visible in the market.
In the past, at Zanzra, an important traditional market in the region inhabited by the Guro (Ivory Coast), the young men who wanted to take a wife were attracted by the markets. In turn, the villages would send their women, dressed in their best clothes. These women would go through the market in a sort of procession and show off their special hairdos, offering themselves to the admiration of the public while they sat on their reserved seats. 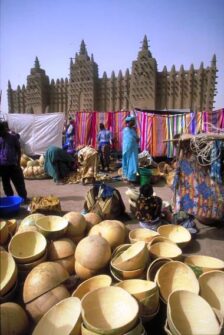 All around, suitors, friends and relatives would offer them money or cola nuts. These exhibitions often caused quarrels between the contenders.
At Gorom-Gorom, a village in the north of Burkina Faso, every Thursday a very colourful market is held. There is a great variety of costumes, ornaments and hairdos displayed by the women.
Gorom-Gorom is located in a bordering region between territories of different groups: Mossi, Samo, Bella, Dogon, Peul and Tuareg; it is the reference market for many villages of the area which, though they are close, are inhabited by peoples of different cultures. By bringing together different races, the market favours a process of integration, the exchange of information, the circulation of ideas, familiarisation and the birth of new social ties alternative to those based on kinship or ethnicity. 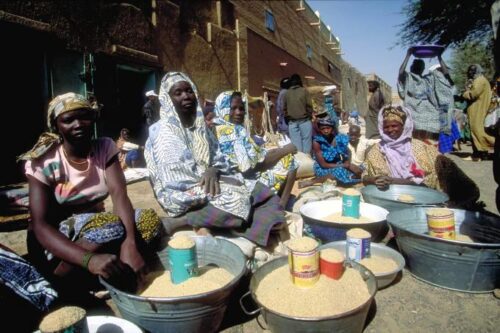 Tanguieta is an appendix of Burkina Faso, on the border with Benin. It is a village located about thirty kilometres south of the border between the two states and has become a fundamental reference point for Burkina traders. In Benin, prices are considerably lower than in Burkina Faso which has no outlet to the sea and receives a large part of its imports through the ports of Benin. For this reason, the women of Ouagadougou periodically go to Tanguieta to buy material, clothes, and food which they re-sell in their cities at prices lower than those usually applied to goods imported in the usual way. This coming and going to and from Burkina has made this apparently insignificant centre a place of integration not only between different ethnic groups but also citizens of different states. At Tanguieta, a language similar to Gourma is spoken and the time is an hour ahead of Benin since everyone follows the time in Burkina Faso. “It is the mountains that make the time change”, say the people of the place, indicating the rocky hills that close the horizon to the south; Benin starts there. 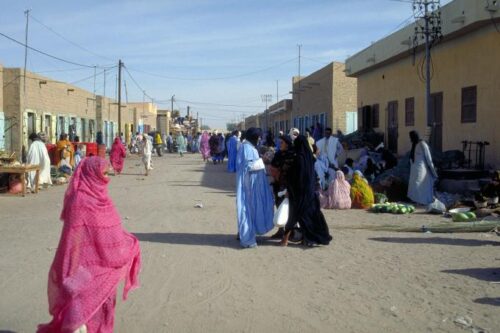 At Bagaji, in the region of Niger inhabited by the Mawri, it is on Wednesday – the market day – when most private sacrifices take place. It is not an isolated case; altars are often found close to markets and sacrifices of small animals are offered, whether to favour a good commercial outcome or to meet individual requests.
Among the Mossi, the market plays a fundamental role in rites of circumcision and funerals. In the first case, the young men, after they have been circumcised, are kept inside the houses of the circumcised for two or three months and have no contact with the population. Their re-entry into society always takes place on market day when the parents, dressed in their best clothes, parade with them in the square while receiving gifts from the vendors. When a chief dies, the announcement is made in the market.
The final funeral rite will also be held in the marketplace a year after the burial when the first daughter of the dead person buys in the market all the food her father used to buy during his life. Once the basket is full, the daughter and the other women start a procession to the sound of drums all around the market square. The round is repeated three times.