The weakness of Somalia’s state has incited neighbours to make steps to tap its maritime resources in search of oil and fishing grounds, adding to other tensions which create a dangerous climate.

The chaos that reigned in Somalia after Siad Barre’s overthrowal in 1991 has encouraged predators to take advantage of the weaknesses of the Somalian state to defend its natural resources. Until recently, Somalis accepted this fait accompli. But things changed in 2014, when the Mogadishu authorities filed a complaint to the Hague-based International Court of Justice (ICJ) over the maritime boundary with Kenya, accusing Kenya of encroaching on its Exclusive Economic Zone (EEZ). As a result, Somalia says it is deprived from an area of some 160,000 sq km or 62,000 square miles which hosts lucrative fishing grounds and possibly, huge oil resources. 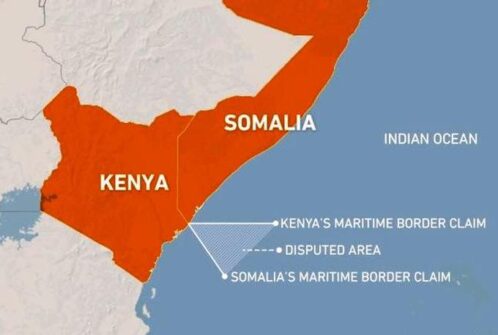 Kenyans consider that since the colonial period the border line runs alongside a parallel to the line of latitude to the East, which goes through the Lamu archipelago and continues inside the Indian Ocean. Somalis argue that the border must be equidistant from both sides of the coastline and must be the continuation of the terrestrial border and seem determined to boast from what they consider their riches.
In 2019, the Mogadishu government decided to auction oil blocks in the disputed waters at an oil conference in London, organised by the British prospection company Spectrum Geo which conducted a 2D offshore seismic survey in the disputed area. Such decision infuriated Kenya which fears to lose 26 per cent of its EEZ and 85 per cent of the continental shelf beyond the 200 nautical miles limit.
Just before the date of the hearings at the ICJ, Kenya’s Attorney General Kihara Kariuki informed the Court, on the 17 March that the Kenyan authorities would not take part in oral submissions in The Hague. Kenya argued that the case should be delayed while it briefed a new legal team. It also cited the coronavirus pandemic as an excuse to postpone the hearings and also objected to the presence on the ICJ panel of a Somali judge, which according to Nairobi should recuse himself.  Based on international maritime law, the ICJ is expected to rule in Somalia’s favour, guess observers. “Possibly the Kenyans withdrew also because of an expectation that they might just lose,” told the political scientist Stig Jarle Hansen, from the Norwegian University of Life Sciences, in an interview with the Deutsche Welle radio. 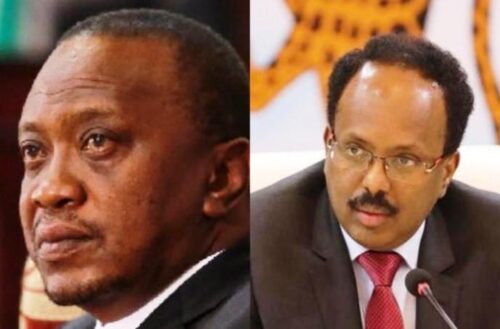 The court’s president, Judge Joan Donoghue, regretted Kenya’s decision not to participate in the oral proceedings and the ICJ ruled that the case should be heard virtually. Somalia was thus allowed to submit its final conclusions on the 18 March 2020. On that occasion, Somalia’s Deputy Prime Minister Mahdi Mohamed Guled said: “We hoped that it would be possible to settle our dispute with Kenya bilaterally, through negotiations. Unfortunately, that proved impossible”.
Then, on behalf of Somalia, the American Attorney Paul Reichler, stressed that the parallel of latitude proposed by Kenya as the common maritime border results from no known or recognized, or judicially sanctioned, method of delimitation, and fails to produce the equitable boundary that the law requires. In contrast, the equidistance line results from the standard process which the Court has regularly employed in the delimitation of maritime boundaries, he argued.
His British colleague, Edward Craven urged therefore the ICJ to “declare that Kenya, by its conduct in the disputed area, has violated its international obligations and is responsible under international law to make full reparation to Somalia”.
The stakes are considerable. Kenya argues that changing the boundary as Somalia demands would mean the loss of crucial fishing areas. About 90% of the 150,000 inhabitants of the Lamu county depend on fishing. According to Nairobi, the loss of this maritime territory would mean a 50 percent loss of the fishing ground. 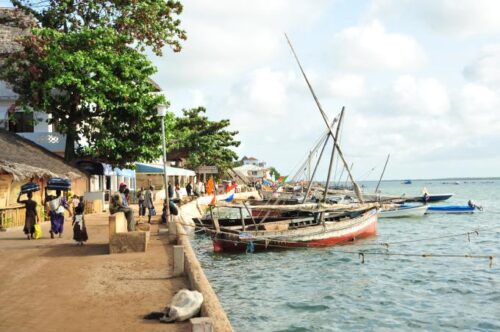 But the major stake is oil. The Somalia government is considering to award 15 blocks in a licensing round this year. Seismic data acquired by the Norwegian company TGS estimated that the resources of the Somali basin may reach 30 billion barrels or the equivalent of the current Nigerian production during 40 years! The existence of such bonanza is known to British Petroleum (BP) which carried onshore and offshore explorations in Somalia before the ousting of President Barre.
Somalia’s intentions to auction these oil blocks during an oil and gas conference organised n London in February 2019, increased tensions between both neighbours. After the conference, Kenya recalled its ambassador to Somalia and asked the Somali ambassador in Nairobi to leave the country for consultations. 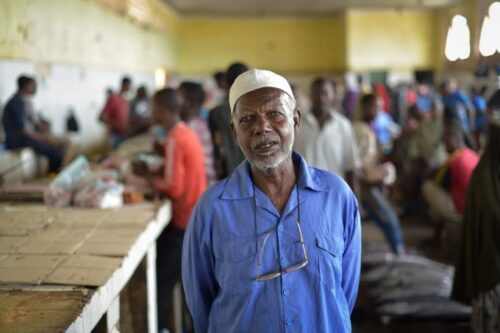 There is also irritation in Mogadishu where authorities resent the fact that Kenya has already awarded earlier three oil and gas blocks in the disputed area to Italy’s oil major ENI. Other players are joining the scramble. One is Norway whose company Statoil is at odds with Kenya since its expulsion from exploration plans in 2012. The French major Total has been offered a block by Kenya in the disputed maritime zone. The Somalian Ministry of Petroleum and Mineral Resources also agreed on a roadmap with Shell and ExxonMobil in 2020 to exploit offshore oil resources and convert a concession to a production sharing agreement.
Somalia’s lawyers complained at the ICJ that Kenya violated Somalia’s rights by authorising oil firms to explore fossil fuels in the same area and awarded oil blocks to at least five oil companies. According to the British lawyer Edward Craven, Kenya accepted that in 2007 the oil company Woodside drilled a deep-water well on Somalia’s side of the equidistance line and concluded that Kenya must annul such concession.
On top of these grievances, the maritime boundary dispute is particularly difficult to settle because of other bones of contention. Theoretically, both countries are allies against the al-Shabab Islamist group, which controls larges rural areas in Somalia and carries out attacks in Kenya. But in December 2020, Somalia accused Kenya of interfering in its internal affairs and severed diplomatic ties – resulting in a mutual recall of ambassadors after Kenya’s red-carpet reception of the self-declared Somaliland’s president. 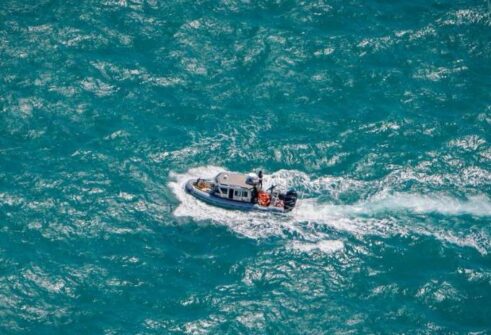 Aerial view of a Kenyan Navy launch just off the coast of the Somali port city of Kismayo.

Somalia also accuses Kenya of backing the administration of the Jubaland regional state against the federal government whose President Mohamed Abdullahi Mohamed aka “Farmaj” wants to centralise power and remove Jubaland’s President Ahmed Mohamed Islam, aka “Madobe”. Mogadishu has also accused Kenya to have interfered in the 2019 election in Jubbaland. There were even clashes at the time between the Mogadishu and Jubaland troops, backed respectively by Ethiopian and Kenyan soldiers. Eventually, Madobe, was re-elected. The federal government immediately nullified the poll. But Kenya continued to support Madobe who reneged on the September 2020 election agreement. Then, in December 2020, Mogadishu also deployed troops at the border of both countries
The maritime dispute adds to this bitterness. On the 19 March 2021, Kenya’s Foreign Ministry said: “The government and people of Kenya feel betrayed that Somalia had brought the case before the ICJ after repudiating a maritime boundary that it had consented to for over 35 years”. “Somalia has to normalize its relations with Kenya before it can engage on any platform anywhere in the world with any person and or agent of Kenya through any proxy,” added the Kenya Foreign Ministry. Mediation attempts failed last March after a Djiboutian fact-finding mission sent on behalf of the Intergovernmental Authority on Development (IGGAD), concluded that there wasn’t enough evidence to support Somalia’s claims of Kenyan interference. In the end, Somalia rejected the mission’s conclusions claiming that they weren’t impartial. 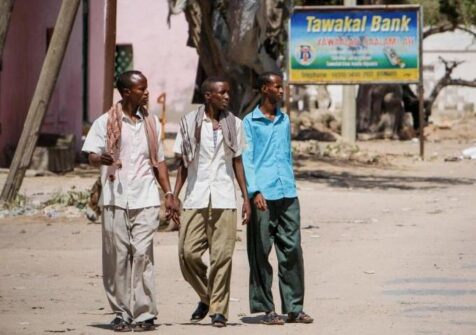 Young men look on as they walk down a street in the centre of the port city of Kismayo, southern Somalia.

To make things even more complicate, all these disputes and tensions coincide with the withdrawal from the country, last January of the US forces which supported the troops of the African Mission in Somalia (AMISOM), in line with former President Donald Trump’s order. Such withdrawal raises concern both in Mogadishu and in Nairobi. Indeed, in Somalia, U.S. troops’ drone strikes and other operations against al-Shabaab had managed to disrupt significantly jihadist activities. But as showed an attack of a Mogadishu hotel on January 31, when the group killed at least five people, including a former Somali army commander and two civilians, the jihadist organisation remains resilient.
Kenyan Foreign Affairs Principal Secretary Macharia Kamau expressed also concern that the U.S withdrawal might create conditions for the resurgence of al-Shabaab in the areas from where it had been retreating. In such gloomy context, Somalia sent however a signal of compromise. At the ICJ hearing, on the 18 March, its representatives said that Mogadishu was seeking “remedies” for any future boundary dispute and added that it would not necessarily demand compensation from previous violations. Yet, cynics point out that it may take years for the ICJ to rule on the maritime dispute and that it has no power to enforce its rulings.