Another so-called Arab – or at least North African – Spring? Given the significant risks and the fact that a few hundred lives have already been lost, rather than spring, geopolitical ‘meteorologists’ might use a less charming season as a metaphor for the civil revolts, wars and political overthrows now affecting  Sudan, Algeria and Libya. For better or worse, there is a desire for change, even if there are few chances that any substantive change will occur.

On April 11, 75-year old Omar Al Bashir resigned, or was forced to do so, after wielding power for the past 30 years. He himself assumed power after staging a military coup in 1989. During his tenure, Sudan flirted with a Islamist inspired politics. Since 2010, the country was forced to renounce oil revenues after South Sudan seceded in a referendum, widely praised by the ‘international community’. The question now is whether or not, it too will endure the ‘Libyan experience’. Perhaps, the pattern might be closer to that of Egypt. Indeed, for the time being, Sudan’s political fate rests in the hands of the Transitional Military Council. The Council has started choosing or evaluating potential candidates for the role of president, being sure not to clarify what sort of role the Council itself would play in this ‘transition’ or even the government that shall emerge from it. 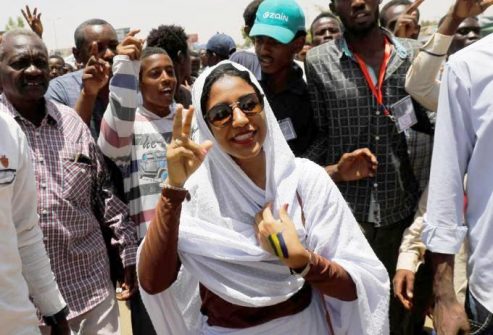 The seasoned gambler might place his/her bets on what seems most likely scenario. Predictably, the Military Council appears to have no interest in abandoning the scene after organizing elections. It seems intent on influencing the outcome, playing a major role, nominating candidates. But, as usual, instability generates unpredictability. Sudan is no exception; and Bashir’s resignation, just as Qadhafi’s demise in Libya or Bouteflika’s departure (and that of his close allies) from the Algerian political scene opens the oath to what the Probability expert Nicholas Nassim Taleb calls ‘Black Swans’, Pandora’s boxes by another name.
As in the case of Libya, dictators or so-called strongmen in, have given the semblance of being able to keep public order even if at the cost of ‘human rights’. But, one of the ‘known unknowns’ to paraphrase former U.S. secretary of defense, Donald Rumsfeld, is that there is no assurance that a ‘strong’ man will be replaced by a ‘just’ one, let alone by one intent on governing democratically. Just as Algerians and Libyans, or Egyptians, the Sudanese people’s desire for democracy faces a considerable risk of being stifled by yet another manifestation of military or authoritarian power. The Sudanese Army has already announced it would suspend the Constitution until at least 2021, thereby suppressing the aspirations of those who took to the streets against Bashir. Moreover, the usual suspects are becoming increasingly involved, while Sudanese parties, including affiliates of the Muslim Brotherhood, try to reach compromises in Parliament through the ‘Freedom and Change’ coalition, the foreign meddling has begun: 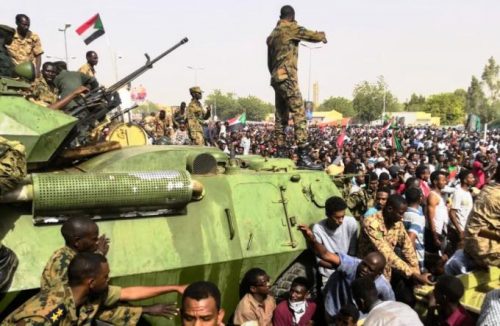 Egyptian President al-Sisi has promptly backed Sudan’s military ‘interim’ junta while, not coincidentally, Saudi Arabia and the United Arab Emirates have already promised some $3.0 billion in economic aid. Do you remember these? They’re the same who have backed General Haftar and his ‘Montgomery vs. Rommel’ inspired adventures in the Libyan deserts. And Haftar himself has reportedly decided to visit Khartoum to meet the Junta members. It should be noted that Haftar’s LNA features a sizeable number of Sudanese, mostly Darfur Arabs (janjaweed) ‘mercenaries’. For its part ‘Freedom and Change’ has withdrawn from negotiations with the military junta, having understood that the generals and colonels will not back down and that Bashir’s departure might best be understood as another case of President Morsi in Egypt.

Politically, the most significant of these events occurred in Algeria, where, with some hesitation, on April 1, Abdelaziz Bouteflika resigned as president of Algeria. As the Algerian media hailed, it was no April Fool’s joke; the 82-year old Bouteflika first became president in 1999. For years he has been ill, and even lost his ability to speak and walk after a stroke in 2013. In fact since becoming president in 1999, he suffered from various illnesses and from about 2005 he was rarely seen in public. In recent weeks, after the start of huge street protests against him and the group of people accused of governing the country by taking his place, he had decided to withdraw his candidacy for a new mandate and had lost the support of the army. 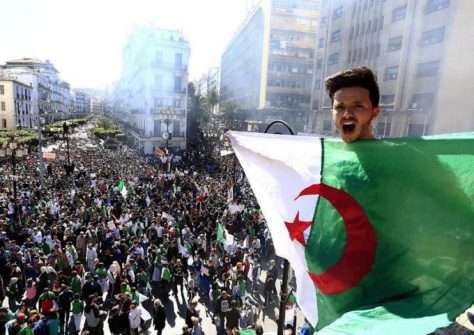 Bouteflika succeeded Gen. Liamine Zéroual, who served as President of Algeria from 1994 until 1999. During that time, marked by violence and civil war, Bouteflika served as foreign affairs minister. It seems that Zéroual fell out of favor with the military, encouraging him to resign. It sounds rather familiar; for it’s clear that Bouteflika reluctantly made the decision to resign, just weeks after announcing he would run for a fifth consecutive (five-year) term. Once again, the army has stepped in to decide and, no doubt, it will play a major role in determining who will fill Bouteflika’s vacant post – regardless of what the tens of thousands of young people, most of whom less than 30 years old may think. The Army – borrowing from the example of the FIS protests of 1991, from Tahrir Square in Cairo, and to a lesser extent Tunisia, eight years ago – decided it would be too dangerous to confront the largely peaceful protests with violent repression. Just as in 1999, the Army has raised a malleable figure to the presidency: Abdelkader Bensalah even if only for an interim period, leading to elections in July of 2019.

Unlike 1999, when war-weary Algerians (some 200,000 people are believed to have died in the conflict), wanted stability, protesters have endured years of economic hardship. Like many oil producing countries, in the Arab world and beyond (Venezuela for example), the natural resource encourages dependency. When oil prices were high, Bouteflika, and his predecessors, could ‘buy’ popular support by keeping people fed and clothed through generous subsidies and social services. But, as oil prices have been falling over the past four years (recovering now, but too late for the outgoing president), public anger has intensified beyond the proverbial ‘stomach’. Bouteflika’s resignation; and his replacement by Bensalah may prove inadequate or too weak; particularly, as the interim president was in Bouteflika’s close circle. 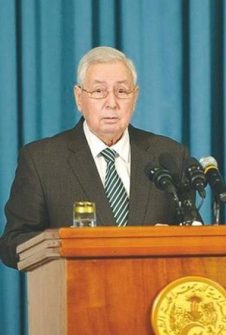 Bensalah has the unpleasant task of pursuing those close to Bouteflika for various allegations of corruption and other crimes to appease the people’s demand for justice, while also ensuring the continued support of the Army. He’s bound to step on some powerful toes, having already targeted two close Bouteflika associates, accusing them of money laundering. The people consider others, even if not facing formal charges, as guilty by association, demanding the resignation of the four ‘B’s. The first is out; and that would be Bouteflika. Tayeb Belaiz, chief of the Constitutional Council, resigned. But, prime minister Noureddine Bedoui remains in his chair. The fourth ‘B’ is, President Bensalah himself. It’s difficult to see how Bensalah will lead Algeria toward new elections. He is pursuing, with the Army’s consent, a legal ‘witch-hunt’, going after friends and enemies of the regime, who may or may not have committed financial crimes, to quell the public anger, believing that justice, or the semblance thereof, will fix the country’s troubles. Rather, the political and military establishment should be planning ways to lead Algeria out of its chronic economic quagmire, while conducting a soft reform of the justice system to ensure fairness rather than ‘expedient revenge’. The focus on justice rather than politics seems to be a way to distract the people, deflecting attention from the fact that whoever runs for the presidency – presumably Bensalah as well – will have to tow the Army line.

And then there’s the issue of the dangers that a democratic Algeria might pose for the rest of the North African region – especially for Egypt. While, Algeria, Tunisia and even Libya have experimented with democracy, President al-Sisi was the big winner in a national referendum to extend presidential term limits, all but guaranteeing his tenure until at least 2030. In other words, nothing has changed since Mubarak. Tahrir Square was mere ‘Kabuki’ theatre. Clearly, democratic neighbors represent an existential threat and a dangerous ‘inspiration’ if successful. 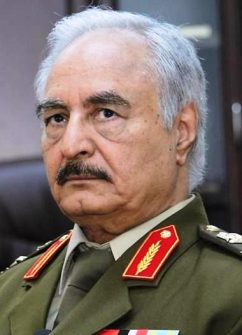 Perhaps, this is one of the reasons that the al-Sisi regime has been backing the offensive into western Libya by General Khalifa Haftar, the leader of the Libyan National Army (LNA), which effectively controls the Eastern Libyan government in Tobruk. Haftar, whose main allies are Egypt, the United Arab Emirates and Saudi Arabia, has also enjoyed support from various European players – France in primis, Partially Russia and from the United States (which have officially backed the Government of National Accord led by Prime Minister Fayez al-Sarraj in Tripoli) as well, as suggested by a phone call himself and President Trump on April 15. A number of international players have decided that stability, even if it could lead to a return of dictatorship, is better for Libya (and for their own interests) than the oddly anarchical status-quo of a sparsely populated, country split between essentially three governments and a variety of fiefdoms or city-states (such as Misurata), vying for control of oil and gas, which happen to be Africa’s largest reserves thereof. 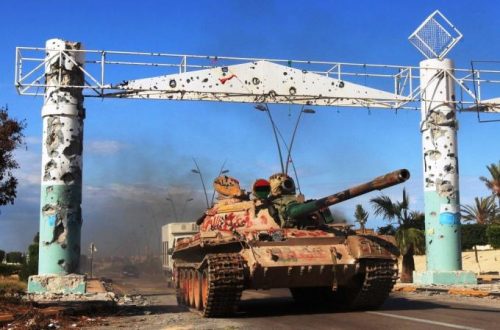 The timing of Haftar’s advance appears to coincide with a meeting the Libyan general with Saudi Arabia’s King Salman in Riyadh on March 27. While there’s no official word about any Saudi marching ‘orders’; the timing of Haftar’s advance was evidently calculated to sabotage the planned and UN sponsored Ghadames National Conference, which was to be held between April 14-16 – now postponed indefinitely. The Conference aimed to produce a political solution to Libya’s crisis, bringing together the various regions, governments, tribes and top militias. Whatever else Haftar will have won or lost, his allies (those in the Gulf especially) have already secured a victory by interrupting the Conference. Haftar’s rash actions have also dug out the hypocrisy of so much meddling, and from the West in particular. After bombing and facilitating the demise of the Qadhafi regime and Libya’s stability in 2011, Haftar’s march on Tripoli has helped demonstrate, if it were not clear already, that external actors – big powers and their freedom infused exhortations included – are as guilty as Libyans, if not more, of creating obstacles to stability and even democracy in Libya. Indeed, the mess in Libya, if anything else, reinforces the idea that authoritarian solutions are better suited to North African region’s leadership problems than experiments in democracy. Predictably, it seems to occur to no one that meddling and interference may have caused more problems than either democratic or authoritarian regimes.