Among the Baganda people living in the area north and northwest of Lake Victoria in south-central Uganda, Luwombo is one of the most popular dishes. It is prepared for specific occasion by specific people.

It is a stew steamed in banana leaves; it has been considered to be a very special dish that was/is served only to very important guests in the Baganda culture. These include the king, chiefs, visitors, and in-laws.
The dish was originally reserved for special occasions like traditional marriages, parties, festivities, and last funeral rites; it is served
only to in-laws. 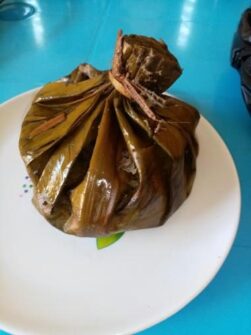 Luwombo may contain chicken, beef, and mushrooms in a groundnut stew, or smoked fish, and plain groundnut stew.  It is a different kind of cooking where the ingredients are tied in banana leaves and steamed. This dish will take from two to three hours to cook.Luwombo is prepared by specific people depending on the occasion. For ordinary festivities, any member of the family will be given the task of preparing it but with strict instructions as to how and what to do when cooking it, otherwise one may serve a semi-cooked sauce for the guests.For a traditional marriage, it is the bride’s paternal aunt (Senga) who cooks it, and she is the only one supposed to serve it to the groom. At the last funeral rites, every wife makes sure she has cooked and served a Luwombo dish for her husband’s family.
Luwombo is a dish that was and still is used to show respect to visitors and to honour the occasion. In Buganda, a ceremony or festivity without Luwombo is considered a very minor ceremony.
During traditional marriages, the bride’s Senga is given the responsibility to make sure that the Luwombo is prepared well and reaches the muko (groom) while still intact. 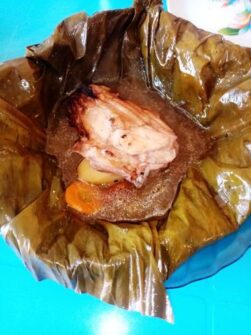 They usually entrust the Senga to do the cooking and she is told to guard it jealously while cooking. No one else approaches the Senga while she is cooking, unless called by her. It is believed that during this cooking, a jealous person can poison the food or add herbs that will charm the groom to change his mind about marrying the bride, or herbs that will cause the newlyweds to have marital problems. She on the other hand, while cooking this Luwombo, has special herbs or a love potion which she adds to it. The love potion is believed to increase the love the groom has for the bride. The Senga’s other job is to make sure that the muko eats the Luwombo.The Senga is given a cock which she dresses, without cutting it into pieces. She cooks it whole and then, during serving, she brings her special dish and serves the groom. She then sits beside him to make sure he eats most of it.
The Luwombo served to in-laws (Baako – the groom and his entourage) is prepared with a lot of care. The Senga of the bride is the only one supposed to serve it to the groom. Though it is a special dish served to in-laws, during the first visit where the man shows interest in marrying the girl, Luwombo is not supposed to be served to him. The reason is that the groom is visiting the Senga who will serve them ordinary food. It is also believed to be a bad omen to serve Luwombo to a man who is showing interest in marrying your daughter. They say he may never come back to ask for her hand in marriage after eating the Luwombo.
At the last funeral rites, the in-laws are served Luwombo as a sign of respect from the family of the woman because in-laws are considered important people in Buganda. Once a husband attends the last funeral rite at his wife’s home and is served food on a plate, that is a sign that he has ceased being an in-law and that all such respect has now ended.
This Luwombo is supposed to be prepared by the woman and her paternal aunt, yet when the last funeral rite is at the man’s family, the wife is not served Luwombo but since she has to make sure that her family members are accorded the respect they deserve, she cooks the food and serves her family. 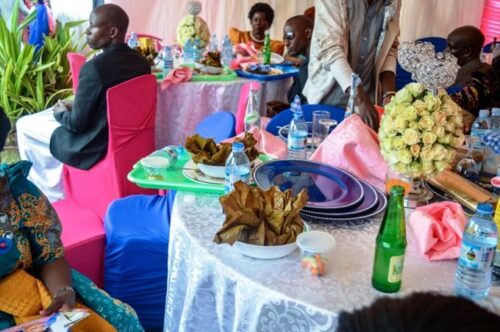 During festivities, a good wife in Buganda is expected to cook Luwombo for her family. Cooking Luwombo is one of the yardsticks of a good wife in Buganda. A lazy wife will not cook Luwombo for her family because it requires a lot of work.
This dish is steamed using banana leaves. The reason for this type of cooking is that it was adopted from the ancestors of the Baganda. In the past, they didn’t have enough cooking pots so they would place matooke and the sauce in one cooking pot, but the Luwombo would be wrapped in different banana leaves.
Not all banana leaves are used in the preparation of Luwombo because some banana leaves are already mature and difficult to fold, or they tear when folded. A banana leaf used to prepare Luwombo is not supposed to tear; it should fold easily. That is the reason they look for young and tender leaves from sweet small bananas (yellow bananas) which are preferably used because they are soft and more flexible. 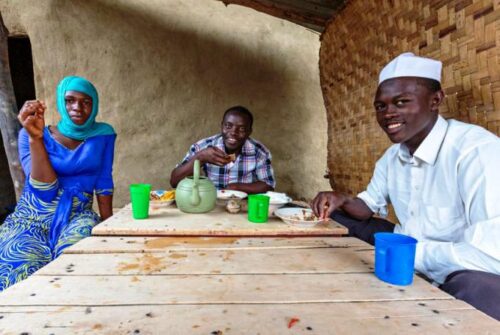 The cook will harvest tender leaves that have not been torn by the wind or damaged by hailstones and which will hold the sauce better. He then roasts them over a very hot fire.
Once the leaves are roasted over the fire, the stalks are removed and kept aside. The banana leaves are then folded from left to right and placed in a basket. The different types of Luwombo are placed in different folded leaves and water is added to a large pot with banana stalks. The tied up Luwombos are piled one on top of the other, covered with a large banana leaf, and placed over the fire to cook.
Today Luwombo has become a popular dish in Uganda and it is no longer a dish served only by the Baganda but other tribes are adopting this cuisine like the Basoga in the eastern part of the country. They have adopted the trend and also serve Luwombo to their in-laws. It is also one of the main dishes on the menus in many Ugandan hotels and restaurants. In Uganda, one is sure to be served a delicious dish of Luwombo. (Open Photo: Fresh fruits and vegetables from Uganda. 123rf.com)