As soon as we reached the pier, we boarded an old rowing boat. Rowing powerfully and confidently, Stephen, the young catechist, brought us to the Island of Nzulezo in Lake Tandane. The voyage lasted almost an hour.  As we approached the island, we began to see the painted houses on stilts. These houses are made of branches of raffia palms. Nzulezo reminds us of a less elaborate version of Venice, in Italy.
Nzulezo takes its name from a local language, Nzema, which means ‘water surface’. There are more than 500 people living on Nzulezo where all the daily business, from preparing meals to taking the children to school, is carried out on the water.
According to legend, the first inhabitants of Nzulezo migrated from Mali in the XV century, after a war with the Mande of Western Africa, fought over their fertile land and its gold. The legend says that the Nzulezo ancestors were led by their god who appeared in the form of a snail in Lake Tandane. The spirit told them to build their houses on stilts above the water for safety. 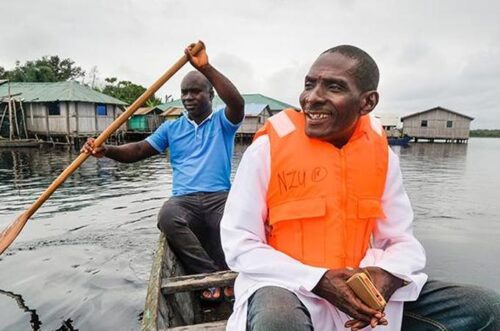 Having disembarked, we stopped a while to talk with Agyei, one of the inhabitants who noticed us and told us: “Each family on Nzulezo has its own street and the street takes its name from the head of the family. Every family member has a canoe: one for the father, one for the mother and one for the children. This is not surprising since it is the only means of transport here”.
Nzulezo is also noted for its rare species of turtles, monkeys and crocodiles. The village on the water is also known for its locally-produced gin called Akpeteshi, that attracts people from all over the world who want to taste gin made from raffia. In passing, the catechist greets Thema who is preparing ground nuts for the midday meal. Behind her we can see the smoke of the fire on which she will soon cook cassava puree. Since wooden platforms are not fireproof, women use traditional clay ovens to cook, such as those on the mainland. 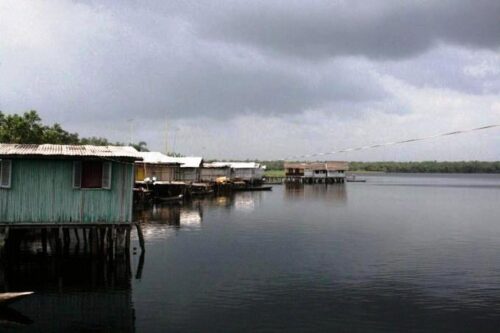 In the distance we can see a boatload of tourists. “Tourism began here twenty years ago – Stephen informs us – ever since Nzulezo was declared a World Heritage Site by UNESCO”.
Tourism has brought some benefits for the inhabitants of the island while televisions, radios and smartphones bear eloquent testimony to their increasing prosperity. As Sedinam said, “ Tourists have also brought us a lot of rubbish”, and it is difficult for the 500 inhabitants to put up any resistance. Floating under the platforms of the simple huts are the many plastic bottles and bags left by visitors.
“The once-perfect symbiosis of man and nature, the impressive flora and fauna of the surrounding humid regions and the fragile ecosystem are in danger”, Father Anthony objects.
Now we have arrived at the ancient church of Christ the King. Today is a special day for the community as thirty children will receive their First Holy Communion. The waiting people greet the priest and us as well with broad smiles and much curiosity. The little church is full and the children are excited and dressed in festive clothes. A choir of young people accompanies the liturgy. The two hours of the Mass seem to end all too soon. Then the priest greets each of the faithful and stays a while to speak with some of the leaders of the community. 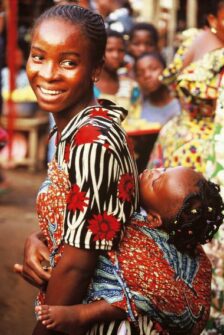 But now it is time to go. Father Anthony asks Stephen to take the boat back to Beyin where other duties await him. On the return trip we pass close to a village where some people originally from Nzulezo have settled where they can make a better living from agriculture than fishing.  Father Anthony points out the house of a well-known healer Mame Nwiah, who is 81 years old. Father Anthony often works with her as they both believe in the power of prayer. “Mame Nwiah knows her limits and knows when she can help and when people need to go to hospital”, the priest tells us. The diseases that Father Anthony and Mame Nwiah are able to treat successfully are mostly spiritual. Father Anthony spends a lot of time praying with people. He blesses them and lays his hands on them. “As priests, one of our most important duties is to give people hope and pray for their good health”, Father Anthony says.  He continues: “I do not see myself as a miraculous healer but I truly believe in the power of prayer”. He is convinced that faith and prayer increase the body’s ability to help itself, and he also adds: “I do not trust only in the power of curative prayer. My deeper aim is to build a hospital next to the parish. With medical consultations and nurses on hand, one day we will be able to help many more people”. He also points out that the nearest hospital is 90 Km away in Sekondi-Takorad. 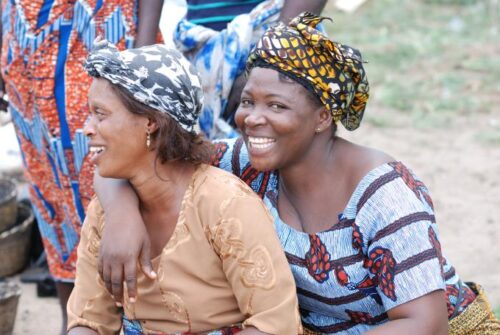 The Parish of Mary in Kengen has 22 chapels, each one led by a catechist. Father Anthony strongly emphasises the importance of the catechist as a leader of the community life of the people. Together with Father Anthony, there is also Father John Kofi Allu, 32. As we introduce ourselves, the phone rings. Father Kofi tells us how the phone is always ringing as there is always a catechist or someone in need of help, especially in this time of the Coronavirus. “Everyone is afraid of everyone else – says Father Anthony. The Corona  pandemic has changed the life of our communities. People don’t go outside. All parish activities have been suspended. While observing proper procedures, we decided to visit our communities and pray in their homes. We visit our parishioners and pray for them and for their sick. As priests, we are often their only contact with the outside world. Many people believe God protects the priest from infection”. At the end of February, Ghana counted 75,850 cases of infection and 540 deaths.
As we were about to say our goodbyes, the phone rang again. A catechist wants a priest to go to one of the chapels to anoint a sick person. It is a journey of two hours but Father Anthony does not delay, even for a moment, and is soon on another errand of mercy.