It is a nation with a Protestant majority, with a strong presence of independent African churches and Pentecostal movements. Only 6.66% of South Africans are Catholic.

The first Christians who arrived on the South African coast were Portuguese explorers who did not evangelize the territory. The first attempt was made in 1652 when Calvinist Dutch settlers reached Cape Province. For nearly a century, the Reformed Protestant faith dominated the area and exerted significant religious, educational, and social influence. At the end of the 18th century, British missionaries arrived and began to enter South African territory with the Gospel in hand. Colonialism and Christianity became companions in conquest, although some missionaries sympathized with the natives, especially when the lands of the natives were expropriated. 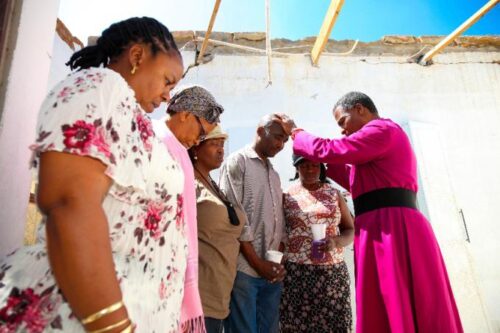 African resistance to Christianity was not relevant as its spiritual legacy easily connected with the new faith, especially because of its connection with their ancestors and their aspirations for liberation from the racism, prejudice, and oppression of the colonizers. African Christianity has struggled to maintain its authenticity – by playing a participatory role – by maintaining traditional practices that are cultural, but also prophetic.
In the mid-nineteenth century, the traditional Christian faith was taking shape in the forms of Afrikaans Christianity, embodied in the Dutch Reformed Church and so-called English Christianity, which included the Protestant and Catholic churches.
At the end of that century, groups of African Christians began to break away from traditional denominations to form Independent African Churches (IAC). The motivation for leaving was neither doctrinal nor liturgical, but political; Africans felt discriminated against when it came to accessing posts of responsibility in their confessions. The exodus, which gave a new feature to South African Christianity, extended into the twentieth century.

The era of apartheid
Afrikaans Christianity supported the segregationist regime by justifying it in an interpretation of some biblical passages (Deuteronomy 20, 10-14 and Romans 13). Faced with this, English Christianity – Catholic and Protestant – became, starting from the 1980s, a critical voice of the segregationist government. 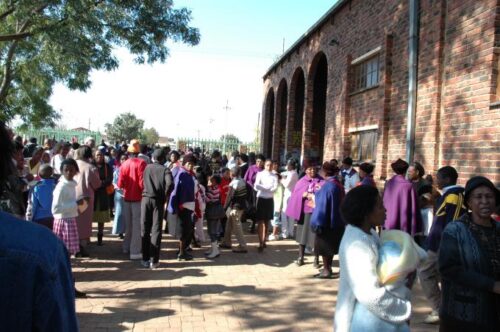 Catholic Parish in the township of Mamelodi.

The Kayros document, published in 1985, and in the preparation of which many Catholic theologians participated, strongly condemned apartheid: “There is only one way to the unity of the Church and that is that Christians who support or are neutral in the face of the oppressor must change sides to be united in faith and action in favour of the oppressed”. The Catholic Church has expressed this support through its presence in the peripheries, in poor and marginalized communities. Their presence is made visible through teachers, nurses or doctors in neighbourhoods and informal settlements.
Other churches with various denominations that fought apartheid have now become socially silent; they are not present when communities protest against human rights abuses or violations, injustice, corruption, mismanagement of public services or xenophobic attacks. One reason is the close relationship between its leaders and successive governments since 1994. Critical and prophetic voices during apartheid now occupy positions in the executive or benefit from the regime’s favours.

Independent Churches
South Africa has more than 10,000 Independent African Churches (IAC). Although very varied, they share some elements that allow classification into two large groups. The first is the Ethiopian Movement or Christian Initiation Churches. They separated from the traditional denominations towards the end of the 19th century, but retained the doctrine and liturgy of the mother churches, albeit with African leadership. 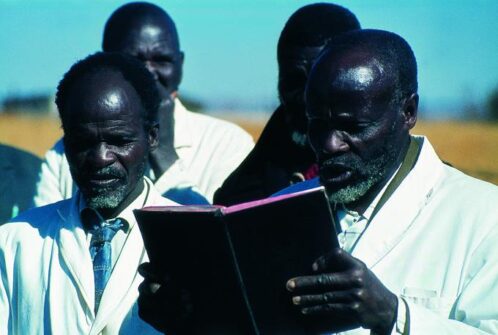 The African Zionist movement or Zionism (aMaZioni), of a messianic nature – and with nearly 20 million members – constitutes the second largest group. Its origin is from the Catholic Church of Sion, founded in Illinois (USA) by Alexander Dowie. They believe in personal conversion, followed by baptism by immersion accompanied by ascetic practices, such as refraining from eating pork, smoking, or consuming alcohol. Healing is at the heart of their doctrine and liturgy. With an emotional cult, they maintain the culture, values, ​​and spirit of African civilization. Some have an ethnic affiliation, such as the Zulu-oriented Baptist Church of Nazareth; the Christian Church of Zion is the most interethnic, although with more roots among the Sepedi, while the International Church of Pentecost is more linked to the Setswano.
Everyone sees water as a sacred element in purification and healing. Its cult is syncretic and ancestral veneration plays a fundamental role in its bond with the divinity.
Although the IAC do not have a unitary ecumenical body, there is the Council of Established African Churches – affiliated with the World Council of Churches – the Association of Independent African Churches, the Organization of African Churches, and the Organization of South African Independent Churches. To these was added the recent South African Council of Independent Churches, registered as an NGO and which brings together the independent Churches in a structure that facilitates relations with the government on national issues.

Spiritual influence
African Pentecostalism has taken root on the continent due to its emphasis on healing, among other factors. Africans interpret life from a spiritual perspective and natural causes are not always at the centre of their worldview. Behind all misfortunes, there is a spiritual power with the ability to influence the lives of individuals or the community. Therefore, witchcraft is responsible for lightning damage, livestock infertility, disease, poverty and even death.
The Pentecostal message of healing as atonement attracts Africans more than a scientific interpretation of life. If the doctor warns of tuberculosis, the witch doctor diagnoses sejeso – a poisonous potion – while in the case of AIDS, he describes it as boswagadi – unpurified widowhood. The Pentecostal and charismatic message flourishes for its promise of a change in the life situation. 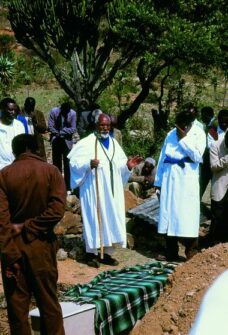 Historically, Pentecostals have dissociated themselves from issues of social justice. They did not build hospitals, schools, or orphanages, nor did they denounce injustices such as colonialism or apartheid. They viewed political engagement or participation as a worldly sin. Its message about healing and the second coming of Christ to restore humanity was seen as contrary to a social commitment.
Today, different currents can be identified within this great movement. One of these, classical Pentecostalism, which emphasizes baptism in the Holy Spirit, is now charged with building schools or helping the poor.  There are also the neo-charismatic churches, generally founded by Africans and split off from the classical denominations. They follow the principles of the search for success in the government of the Churches and their preaching is thematic. The principles of gurus like John Maxwell are at the heart of its preaching. They attract businesspeople and entrepreneurs from different areas of society. Its prophets promise their followers the three Ps – power, protection, and prosperity. 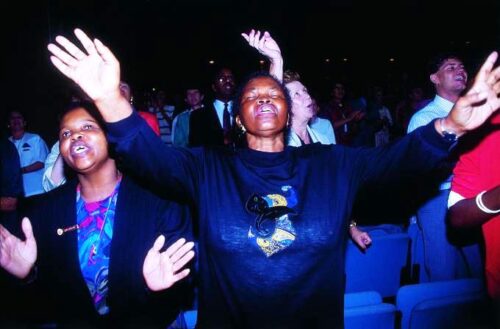 African Pentecostalism has taken root on the continent due to its emphasis in particularly on healing.

Finally, there are also the New Prophetic Churches, which continue to appear. Although Pentecostal in nature, their message about personal conversion is limited and they place greater emphasis on prophecy and revelation. They preach the power of the Holy Spirit, but with few biblical references. They use traditional African spells.Both the Pentecostal and the Independent African Churches continue to recruit very significantly among the members of traditional Christian churches.

Ecumenical dialogue
Interreligious dialogue has become a relevant theme in South African theology. Nevertheless, the challenge is how to develop a practically applicable theology of dialogue, manifested in a dialogue between religious communities and people from different cultural backgrounds. What exists is a dialogue of life between members of different confessions who share activities in a spirit of unity beyond their religious affiliations.There are three major ecclesiastical bodies on the religious scene in the southern region: the South African Council of Churches, the South African Catholic Bishops’ Conference, and the South African Evangelical Alliance, which often collaborate on religious and social issues. (Open Photo: South Africa. A wooden cross with the Ten Commandments engraved on granite in  Ficksburg in the Free State Province. 123rf.com)