Every town and city has its own tales, myths, and legends that make up part of the culture of Nicaraguans. Those who appear to be the simplest folk, all the while guarding the treasure of the traditions of their ancestors.

León is the second largest city in Nicaragua, after Managua. It was founded by the Spanish as Santiago de los Caballeros de León. The city is located along the Río Chiquito (Chiquito River), some 90 kilometres northwest of Managua, and some 18 km east of the Pacific Ocean coast. Among the museums there is a Museo de Leyendas y Tradiciones. And there we have listened to some of the interesting stories.
One of the interesting legends in León is the Carreta Nagua. A bewitched wooden cart comes out at night drawn by two emaciated oxen, their hides tight over their ribcages, guided by death himself, skeletal in appearance. Others say there are two skeletons, each with a wide hood and a candle in hand, leading the beasts along the streets. The wooden wheels make a tremendous creaking sound, so frightful that no neighbour dares go near their window to look out. 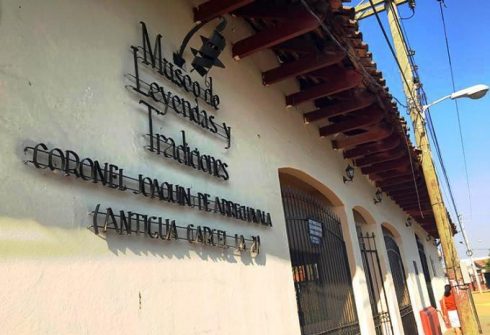 Leon’s Museum of Legends and Myths.

The legend of the Carreta Nagua is an expression of the terror that reigned during the conquest, an indelible footprint of panic in the collective memory of the indigenous peoples. Spanish soldiers raided Indian villages at night because it was difficult to capture them during the day when they were out in the hills and fields.
The conquistadors generally went around with a caravan of oxcarts to round up slaves to labor in the silver mines of Peru. The captured Indians were chained to the posts on the carts. The noise made by the wooden wheels was infernal, one to which the Indians were unaccustomed since these vehicles were introduced to the New World by the Spaniards. They interpreted the sound as a fresh manifestation of the nocturnal spirits that constantly laid siege to the peaceful calm of their villages.Some of elders, assert that the cart is announcing the death of someone. As it rolls down the deserted streets, the howls of dogs can be heard in the distance. Those who say they did catch a glimpse of the Carreta Nagua tell how they came down with a tremendous fever or fainted. Others are said to have died of fright at this hair-raising specter from the dark side.

El Cadejo,
León also presents another character from Nicaraguan mythology, this time a large hound with brilliant eyes that makes a distinctive sound as it goes down the street, the claws on its paws scraping the ground. Some talk of the white cadejo. Others tell of a black cadejo, similar in size to the white one, but this one kills those it find along its way in the dark of night and silence of places off the beaten track. Many are the testimonies of León residents who have seen someone die because of this animal, its very colour symbolizing evil.

La Llorona
The people of León tell of another figure of the night that brings terror to the campesino communities with its ceaseless sobbing near the river. The story goes that a woman once had a 13-year old daughter who fell in love with one of the white conquistadores back during the times of the original colonization of Nicaragua. They say that the mother told her daughter that she should not mix her blood with that of the conquistadores. Heedless of her mother’s warnings, the young Indian lass would go to the river to bathe. She found her white-skinned lover there on any number of occasions and became pregnant. But he had orders to go back to the motherland. 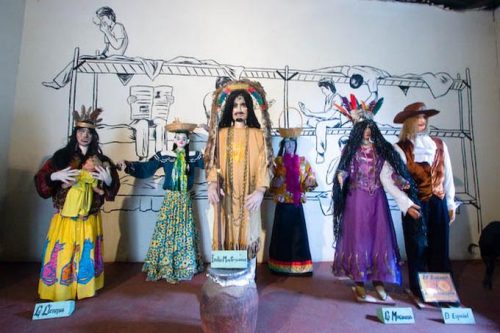 The girl wept desperately so that he would take her with him. The crying jags became so severe that one day she had an attack and fainted. On awakening the following day, she found a baby boy by her side. She took him in her arms and with anger she remembered what her mother had always told her: ‘the blood of the conquistadores  must never be mixed with that of the slaves’.
The rage built up to the point where she threw the infant into the river. Right away she realized what she had done, cried out ‘Oh Mother!’ and jumped into the river to save him. But it was too late.
The young mother would walk weeping in the streets driving people crazy with her wails, and so the people called her ‘La Llorona’. According to legend, her spirit comes out at night near the river, and one can hear her laments and weeping: “Oh Mother….! Oh Mother!” Others claim she cries out “Ayy, my baby…!”

La Cegua
The town of Masaya is just east of Masaya Volcano, an active volcano from which the city takes its name. It is Nicaragua’s third most populous city, and it is culturally known as the City of Flowers. Masaya is known as ‘The Cradle of Nicaraguan Folklore’. The Barrio Monimo in Masaya is one of the most important indigenous villages located in the pacific region of Nicaragua. Monimbo is a nahuatl word which means ‘close to the water’ due to the proximity of Lake Masaya.  Monimbo is also one of the few places in Nicaragua preserving deep rooted indigenous legacies. 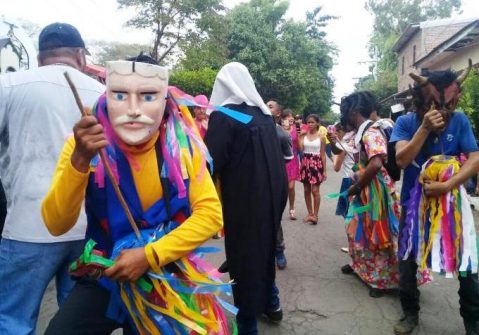 Another popular tale is about La Cegua, as told in Monimbo. The legend has to do with perverse women who by night disguise themselves as ghosts with painted faces and long tresses of hair. They go out very late at night along the lonely streets and paths in search of unfaithful men who have cheated on their wives, misled lovers, or men and women with rivalries because of jealousy over some amorous or passionate relation.
Elders said that someone who runs across them and hears their insufferable shrieking becomes despairing, gets nervous, and falls to the ground ill or unconscious. And at precisely that moment, La Cegua bewitches or puts a spell on their victim. They vomit out their souls and transform themselves into young women garbed in leaves of garuma. Their hair reaches down to the waist and is made of cabuya (sisal) and their teeth are caked with green like the peel of a green plantain.
As children, many of us that have now grown up heard this story about women of the night that toyed with men they found along the way, mainly those unfaithful men who are deserving of punishment and those who stay out too late. From this comes the phrase ‘you are playing La Cegua’, said to those who behave in a silly or foolish manner.

La Mocuana
The town of La Trinidad is reportedly the source for one the most well-known mythological figures, La Mocuana. Josefa Maria Montenegro in her book Nicaraguan Legends, has one version of this tale: ‘Around 1530, the Spaniards carried out a well-armed expedition into Nicaraguan territory in order to extend their domain and increase their wealth. During that incursion, the Spaniards managed to subdue the Indians of Sebaco that lived by the Moyua Lagoon. The chief of the tribe, once vanquished, presented the conquistadors with deerskin pouches filled with nuggets of gold. 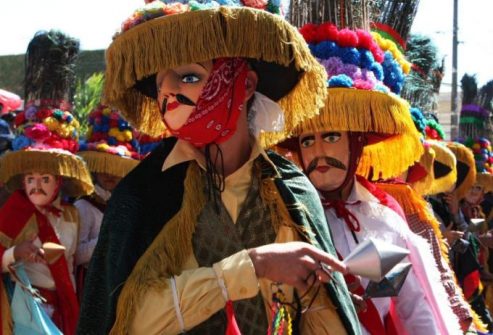 The news in Spain of the conquistadors having returned with great wealth drew the attention of a young man who aspired to be a man of the cloth and whose father had died during the incursion. His mind made up, the young man joined a new expedition and after a long and arduous journey arrived on Nicaraguan soil, where he was well received by the residents who thought he was a priest.
On arriving in Sebaco, the young man met the beautiful daughter of the cacique and romanced her with intentions of seizing the wealth of her father. The young Indian fell lost in love with the Spaniard and as proof of her love, let him know where her father kept his riches. There are those who say that the Spaniard also fall really in love with the young Indian maiden. 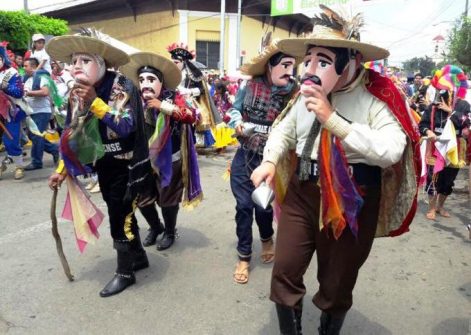 The cacique, on hearing about the affair between his daughter and the foreigner, made his opposition to the relation clear and they were obliged to run away. But the cacique tracked them down and faced off against the Spaniard, killing him. Then he locked up his daughter, though she was pregnant, in a cave in the hills. Other versions have it that the Spaniard locked up his Indian lover after seizing the treasures.
The legend tells of how La Mocuana went crazy with time being locked up and later managed to get out through a tunnel, but in doing so she dropped her baby son into an abyss. Ever since, she appears on the road inviting those passing by to her cave. Those that have met her say they never saw her face, only her svelte figure and long beautiful black hair.
In some places it is told that when La Mocuana finds a newborn, she slashes its throat and leaves a handful of gold for the parents of the infant. Other versions assure us that she takes the infant away, always leaving pieces of gold’. 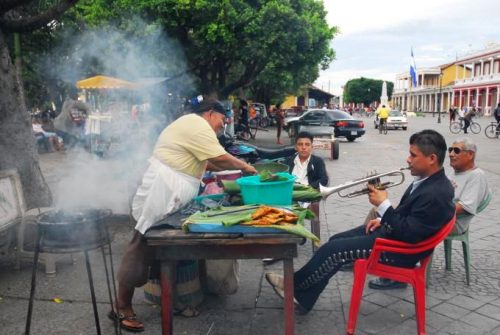 Another legend says that La Mocuana goes out after 12 midnight dressed in silk and residents of La Trinidad say they have seen her on the Pan-American Highway. Others have tried to follow her into the cave where she hides but found that impossible because of the thousands of bats living there.
There are many other tales left to tell in which the history of our ancestors is an interplay between reality and fiction, the visible and the hidden, the mysterious and the day-to-day. The comings and goings of other cultures that clash with the rooted beliefs of our forebears from the Conquest to modern times have made us into a people that creates its own myths and legends as a defense from those other cultures and as an expression of our own.