On 18th August 2020, a group of military officers took power in Mali, arrested President Ibrahim Boubakar Keita and other leading figures and created the Comité National pour le Salut du Peuple (National Committee for the Salvation of the People, CNSP) to rule the country.

The CNSP is led by Colonel Assimi Goita, head of Malian Special Forces. The borders were closed, and a curfew was imposed throughout the country.  As in 2012, the military (or at least some parts of it) subverted the democracy with the declared goal of saving the country, a country that was indeed in turmoil. But is a coup the solution? The instability in Mali was particularly evident in the south. Instead of inaugurating a new political phase, the April 2020 legislative elections brought insecurity. A political dispute on the attribution of some parliamentary seats led to massive protests in the capital Bamako and other cities. The protests were organized by a coalition of different groups, the Mouvement du 5 Juin-Rassemblement des Forces Patriotiques (5th June Movement-Rally of Patriotic Forces, M5-RFP), led by an influential but controversial Muslim cleric, Mahmoud Dicko. 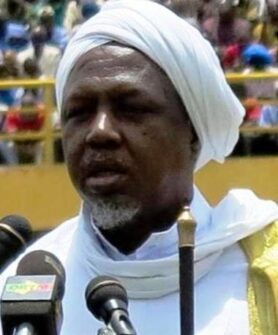 M5-RFP asked for the resignation of President Ibrahim Boubakar Keita, and the dissolution of the National Assembly and the Constitutional Court. Dozens of people (the estimates vary according to the sources) died in the clashes between protesters and security forces. The international community mediated between government and opposition, with mixed results. In July, a new government was created, and the contested Constitutional Court was de facto dissolved. But the opposition was not satisfied and kept on asking for the resignation of Keita.
Therefore, after a period of calm, protests recommenced.
During these weeks of turmoil, Mahmoud Dicko took a sort of conciliatory stance toward the president. He repeatedly criticized Keita but never closed the door to him, so to speak. This was quite remarkable in comparison with the attitude of some of his allies in M5-RFP. But Dicko has been accused for years of promoting the Islamization of Mali at the expenses of its secular institutions.
Some members of M5-RFP are secular movements and are uncomfortable with the idea of paving the way to religious fundamentalism, as happened with the Islamic Revolution in Iran.
M5-RFP expressed support for the military coup and its supporters took to the streets to celebrate the change of regime. After a meeting with CNSP on 20th August, Mahmoud Dicko said he would withdraw from politics. But only time will tell which kind of relationship M5-RFP will have with CNSP. And a Dicko comeback cannot be excluded.

Hate-provoking in the centre
Before the coup, in central Mali the security situation was alarming, especially due to clashes between different ethnic groups, such as the Peuls and the Dogons.
The instability in recent years also damaged relations between ethnic groups in different areas of the country. 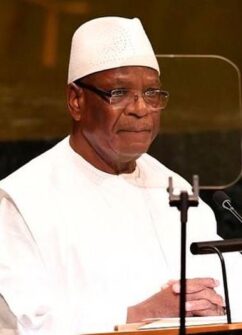 The Tuareg militia’s attempt to create an independent state in the north in 2012 brought the Tuaregs into opposition with other ethnicities. And it opened up the way to the claims of some groups, like the Peuls, living in central Mali. Within this community, some took up arms allegedly to defend their people from the abuses of Malian security forces, armed groups, and Jihadists. Some Peuls joined Amadou Koufa, an Islamic preacher who created the Katiba Macina (KM, known also as Macina Liberation Front), a Jihadist group linked to Al Qaeda. KM took its name from the Peul Empire in Macina, founded in the Nineteenth century. In West Africa, the Peuls are increasingly accused by parts of the population of being linked to Jihadist groups. The fact that some of them are Jihadists (and the existence of KM is proof of this) does not imply that all Peuls are Jihadists. But the populations increasingly see their long-time neighbours as a threat.
This is true in particular in the case of Dogons, who live in central Mali and have a rich cultural heritage (like the Peuls). 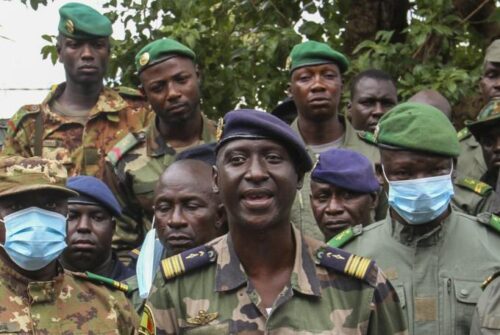 Colonel-Major Ismael Wague, centre, spokesman for the soldiers identifying themselves as National Committee for the Salvation of the People.

Tensions between nomadic Peul herders and sedentary Dogon farmers deteriorated in recent years, and the religious element brought violence to another level. Jihadists like Koufa preached among the Peuls to spread a radical vision of Islam that led to clashes with the Dogons, who are animists. According to an UN report leaked to the press in mid-August 2020, in their actions against the Peuls, the Dogon armed groups are supported by the Malian armed forces.
In the clashes in northern and central Mali many soldiers have died but, according to the UN, also the soldiers also killed many people.

Apparent calm in the north
In the north of Mali, the situation seems more stable. Undoubtedly, Jihadist groups still compete for power and the state is not able to enforce law and order there. In some towns public officers simply disappeared to escape violence. Armed groups (and among them Tuareg separatist militias) are the de facto rulers of the land. However, clashes have decreased in recent months. At the moment, separatists are not really putting pressure on the government on a military plane, because they are exploiting the tensions in the south to consolidate their power. Their goal is an independent state ruled by Tuaregs in the north. The more the turmoil in Bamako continues, the nearer that goal seems to be. 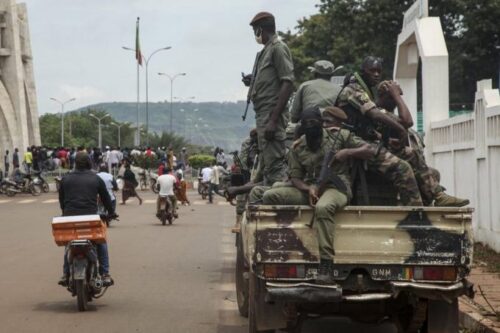 At this time, Jihadists in the area seem more involved in conflict between themselves than in war against the institutions. On one side, there are the groups linked to Al Qaeda; on the other, those who have pledged allegiance to the Islamic State. According to some analysts, the members of Al Qaeda in Mali have started some sort of dialogue with Bamako. It is difficult to say if this initiative will bear fruit, but at least for now, it has produced a significant consequence. The Islamic State in the Greater Sahara (the Islamic State branch in the area) is attacking Qaedists.
The Algiers Peace Agreement (APA, signed in June 2015), reached with the support of the international community, was supposed to bring peace to northern Mali. but it basically remained on paper.
The past government and the groups that signed it accused each other of the stalemate. 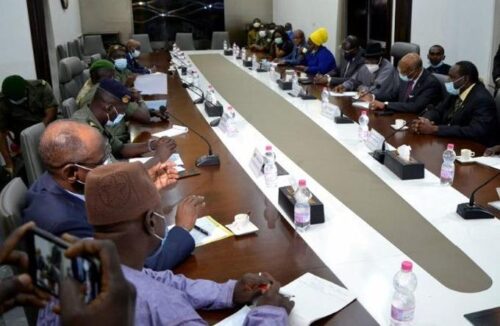 The West African regional bloc (ECOWAS), led by Nigeria’s former president, Goodluck Ebere Jonathan, met with the junta in a bid to restore constitutional order in the country.

The problem is that, with all its faults (due to the lack of will in its implementation), the Algiers Peace Agreement is still the main chance to pacify this part of Mali. One key problem is that the APA is not known in its parts by most of the population. So, different political parties, especially in the south, exploit this lack of knowledge to denounce it as a first step towards the division of the country. Some members of the M5-RFP want to renegotiate it or refuse it as a whole. On the other hand, the CNSP claimed to respect the APA and to implement it.
The international community condemned the coup. In particular, some chiefs of state of the region were quite clear on this issue. But at least in the short term the world will have to deal with the CNSP. One of the key issues is that the CNSP promised free elections in a “reasonable” time and must be held accountable for that.
Even if the situation was deteriorating on multiple levels in Mali, at the moment the military coup does not seems the best solution to the problems of the country. It risks bringing more instability and more violence. And in the recent past the Malian military did not show particular ability in ruling the country.