The Museum of African Civilisation was founded in Dakar: it contains African art from its origins to the present day. The dream of Léopold Sédar Senghor.

Over four-fifths of the artistic patrimony of the continent, the experts say, is to be found in Western museums, art galleries and private collections. It is the result of a veritable plundering on a vast scale, carried out during the colonial era by the European occupiers, with the complicity of the prejudice that Africans were unable to take care of the masterpieces that survive up to the present day. In some cases, political instability and war would say those who hold this view are right. If we consider, for example, the damage inflicted by the Jihadists in 2013 on the precious manuscripts of the Timbuktu library in Mali. 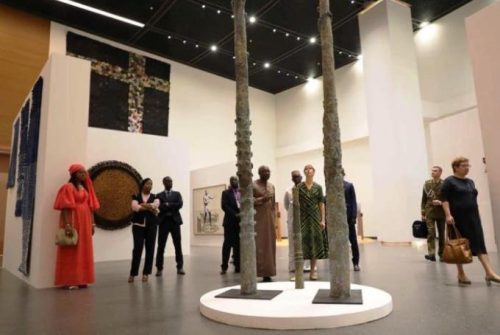 Fortunately, the wind of change is blowing in Africa. In 2017, in Cape Town, the Zeitz Mocaa museum of contemporary African art was opened, art that has already become the object of study of artists and researchers. What was needed was some sort of Louvre or British Museum, or an institution created for the ambitious purpose of preserving African art in its totality, from the dawn of civilisation to the present day. The authorities in Senegal sought to fill this lacuna and, last December, they opened the Museum of Black Civilisations (MCN), the result of an ambitious pan-African project. It is the realisation of the dream of the President of Senegal, Léopold Sédar Senghor – also the father, together with the Martinique citizen Aimé Césaire, of the concept of Negritude – to build a museum to house the artistic expressions of the black people of the world.
Senghor launched the idea in 1966, on the occasion of the first festival of Black Art and it took fifty-two years to realise it. 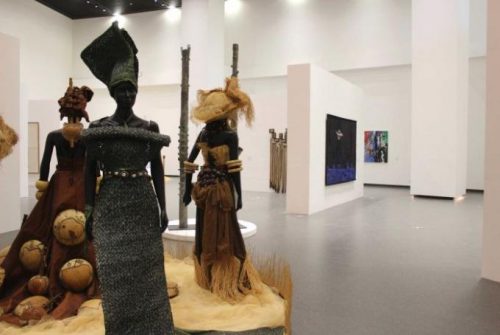 Situated in the area of the port, close to the terminus of the ferries going to Gorée, the island that bears the memory of the Atlantic slave trade, the new infrastructure is conspicuous for its rounded shape that evokes the dwellings of the Casamance, a region in the south of Senegal. In the entrance hall, an enormous baobab-shaped sculpture by the Haitian Eduard Duval-Carrié, welcomes visitors. The museum space comprises a total of 14,000 square metres, on four floors, including an auditorium with 150 seats; it has room for up to 18,000 pieces and is, at present, the largest museum in Africa.
The exposition is a voyage in time and space, leading from the cranium of Toumai, a hominid of about seven million years ago, discovered in Chad, to the present, with works by contemporary artists like the Mali Abdoulaye Konaté and passing through centuries of history, including also the African diaspora in the Americas. Ritual masks, sculptures and statues, not only from Senegal but also from various other African countries, tell of the effort to construct a narrative that is both unified and daring. Its purpose is the displaying of the black continent, by finally giving voice to its inhabitants and its heroes like El Hajj Omar Tall, the Senegalese Islamic fighter, whose sword was one of the most admired objects during the inauguration of the museum, being, as it was a symbol of anti-colonial resistance. 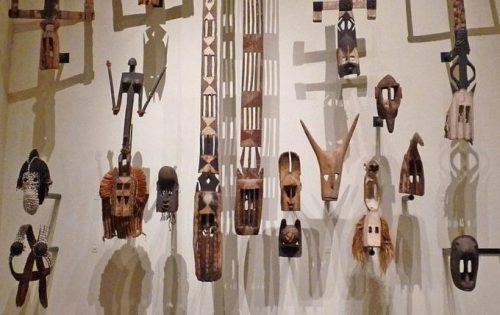 The building itself was a gift from the government of China which paid the costs of over 30 million Euro, executing the project through the Beijing Institute of Architectural Design, and overseeing the works lasting seven years. Anyone visiting the MCN should not be surprised, therefore, to find the descriptions of the museum objects in French and Chinese. For the Asian giant, the cost of the museum was very little when compared with the 110 billion Euro it spent in Africa in the last decade, which promises an increasingly influential Chinese role in the administration of the resources and economies of many African countries.The Museum of Black Art is not only a proud celebration of the creativity of African man in the history of the world; this monumental structure also represents a long-awaited opportunity to demand the restoration of the African artistic patrimony dispersed throughout the world. The purpose is to silence those who defended the conservation of African art in the West due to the lack of a suitable structure in Africa. “It is a false problem, – declared Ibrahima Thioub rector of the  Sheikh Anta-Diop University of Dakar – the answer to the problem has already been given by the Africans who produced these works and conserved them for centuries in perfect condition without museums”.
The first person to make a move was the French president Emmanuel Macron who, in 2017 declared in a speech given in Ouagadougou his desire to start a programme of temporary or permanent restitution of African works of art in France to their original countries. To do this, he appointed two experts, Frenchman Bénédicte Savoy and Senegalese Felwine Sarr, to draft a report, published last November, on the question. “We cannot enjoy works of art that we like in a museum while ignoring their hidden history of violent acquisition”, Savoy stated in an interview on French television. The opinion of Sarr and Savoy is that objects taken away in a military context before 1899 (the date of the first Ajax convention on conflict law), those taken by scientific expeditions or handed over by colonial administrators and those illegally purchased after 1960, should be restored. Works legally purchased are to be excluded, with the free and documented consent of both parties, as well as those bought by museums  while observing international law. French museums have around 90,000 African works of art and what will actually be done is a matter for speculation. Macron has declared his wish to hand over 26 objects to Benin where they will be placed in four new museums. Besides Senegal, other countries may also reclaim objects of art taken illegally. This applies not only to France: the African patrimony is preserved also in Berlin, Vienna, London and in Belgium. In the meantime, the MCN is willing to house eventual works restored to African countries without adequate museums to receive them.