The Kunama, an Eritrean ethnic group living in the remote and isolated area between the Gash and Setit rivers near the border with Ethiopia. Kunama life is marked by traditional rites and ceremonies handed down by the ancient fathers and scrupulously observed. A glance at the rites of tillage.

The fields have been cleared and prepared and there is nothing else to do now but to wait for the rains that soften the soil and allow ploughing to begin. However, nobody would dare plough his field, under pain of punishment, without first performing the propitiatory rite of laga lasa, the sacrifice of the red goat, as an invocation and blessing for a successful season of sowing and harvesting. 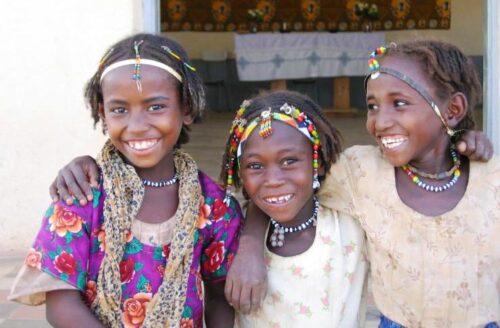 Late one evening, when the pastors and the inhabitants have all returned to the village, one of the elders climbs a small mound and announces that on the following day, the sacrifice of the goat will take place; for this reason, nobody is allowed to absent themselves or leave the village. Each family prepares food to be eaten during the sacrificial ceremony.

The Sacrifice
The following morning, the married men go outside the village to a special place to carry out the sacrificial rite. The red goat, an unblemished animal, is slaughtered with its head facing the rising sun, butchered and cut in pieces to be roasted over a heap of stones. While the animal is being killed, the celebrating elder recites the invocation: “O God, and all you who sleep in the depths of the earth, kindly turn your face to us. May the seed we scatter flourish and produce abundant fruit for all the Kunama, for the Baria-na-ra and for the Beniamer”.
He then takes pieces of the liver, heart and kidneys of the victim and, calling on Annà (God) casts them towards the cardinal points of the compass, starting from the east. 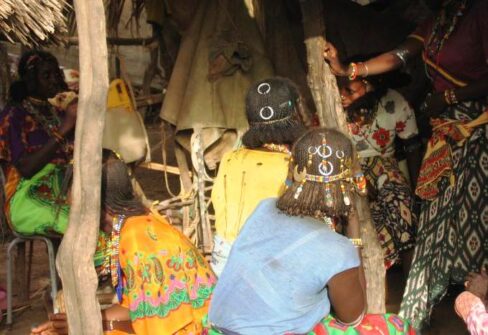 Those present then eat what is left of the meat of the goat. Meanwhile, the women, children and other people of the village together eat the food prepared the previous evening.
After the ritual celebration, the kubula (drums and dancing) and marriage celebrations are forbidden until the celebration of Maskala or Toma Fada in the month of October-November. The prohibition during this period of the use of drums or noisy marriage celebrations is due to the Kunama belief that the tom tom of the drums would deafen the crops, preventing them from growing and the cereals from ripening.

Ploughing
The Kunama do not plough before but after sowing the seed so as to move the surface of the soil and cover the seed.
The agricultural season is a sacred one during which there must be no personal, family or tribal disputes, divorces, robberies, cattle stealing or vendettas under pain of the land becoming infertile. The sacred period must not be profaned by any evil acts.
Four days after the celebration of the laga lasa sacrifice, the ploughing of the fields may begin. The day is then fixed on which all the villagers must first come to the ploughing of the field belonging to the lagá mannà (owner or patron of the land). 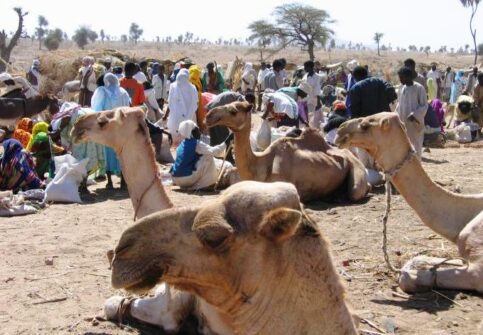 On that day, all the families bring some food and aifa which is consumed in the field; the men bring the oxen and implements for ploughing; all the villagers come to the field and share in the work. When the ploughing is done, the oxen are not unyoked from the plough but everyone, both people and beasts, turn towards the rising sun; this is the moment in which the lagá mannà recites the prayer to God and to the souls of the ancestors that the land may yield abundantly for all and he thanks the villagers for ploughing his field.
As a reward for the family which donated the red goat for the sacrifice, the whole village ploughs their field. If the rains are not sufficient, or too late, endangering the crop, the elders inform the village of the day of a meeting for community prayer to invoke Annà and the ancestors, begging for abundant rains.
On the appointed day, a portion of polenta and fresh milk is first distributed to the assembled children; when they have finished eating, everyone, young and old, bow together repeatedly, reciting the various invocations to Annà. 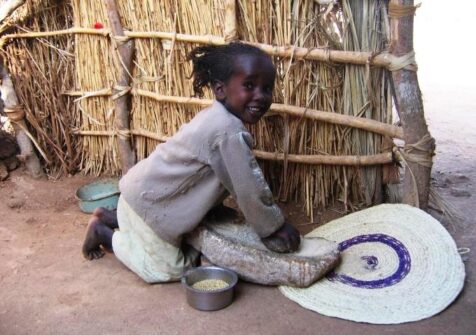 When the seed has grown a little and the weeding has to be done, there is first a sacrifice of the laga garma, the red sheep, in a special place and after the village has been informed. The blood of the victim is collected in small containers to be given later to some of the young men of the village who, sent in all directions, go through the fields sprinkling the blood, a gesture of good fortune. During the sprinkling, the young men neither respond to greetings nor greet anyone else until the end of the ceremonies. When the sacred season of ploughing has begun, it is forbidden to build new houses, to gather honey, to do any weaving (baskets or mats) or make pottery, or do any other work not connected with cultivation. During that period, it is also forbidden to light the fire in the open courtyard for the various purposes of the family as people usually do, and even within the house.
The fire would have a bad influence on the crops.
The ploughing of the fields is not simply a basic necessity for the Kunama people but also a way to keep alive their ties with the whole Kunama family. (K.M.)