Plants have been a source of effective therapeutic agents for various diseases. Globally, there is a growing interest in the development of drugs of plant origin. Lantana camara (Family Verbenaceae);
common name lantana, is one of the plants known to have great therapeutic potential.

It is an erect or subscandent, vigorous shrub which can grow to about 2-3 m in height forming a dense thicket in a variety of environments. The leaf is simple, ovate or ovate oblong, and arranged oppositely along the stem. The leaves are bright green, rough, finely hairy, with serrate margins and emit a pungent odour when crushed. The flowers are in clusters consisting of numerous small tubular flowers.
These flower clusters are borne on stalks and can be in a wide variety of colours (white, cream, yellow, orange, red, pink, and purple) and are usually made up of three circles of florets with each one commonly of a different colour. The fruits are fleshy, ovoid, purple or black when fully ripe and about 5 mm long. 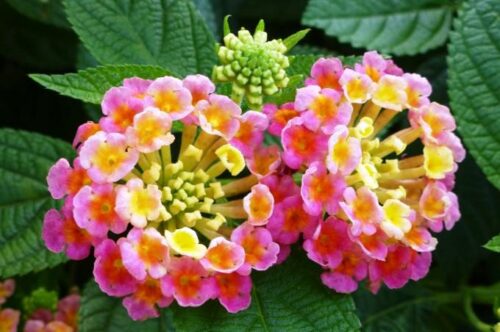 Despite its tendency as an invasive plant species, Lantana camara is known to be an important medicinal plant with several medicinal uses in the traditional medication system. Its preparations are used in folk medicine for the treatment and management of numerous disease conditions including skin itches, leprosy, rabies, cancers, chicken pox, measles, asthma, ulcers, swellings, eczema, tumours, high blood pressure, bilious fevers, catarrhal infections, tetanus, rheumatism and malaria. The infusion of the whole plant is used to cure bronchitis. In parts of its native range, Lantana camara is used as a source of medicine for treating stomach disorders. 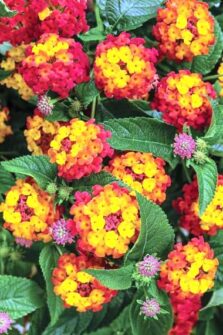 The stem bark of Lantana camara is astringent and used as a lotion in leprous ulcers and other skin eruptions. The freshly harvested leaves are boiled and applied externally to alleviate body swellings.
The leaves are aromatic with a minty taste, they have a cooling nature, are antiphlogistic (have potential to reduce inflammation), anti-dermatosic, diaphoretic, febrifuge, pectoral, stimulant, tonic, and vulnerary. An infusion of the leaves and flowering tops is used in the treatment of fevers, constipation, tuberculosis, and bronchitis. Furthermore, the leaves  are also used  to  treat  cuts, rheumatisms,  ulcers, catarrhal  infection,  tetanus,  malaria,  cancer, asthma,  swelling,  tumour, sores,  cold  and  high  blood  pressure. Combined with the leaves of Cymbopogon citratus, the leaves are used as an infusion to treat colds, high blood pressure and malarial fever. Externally, the leaves and stems are used as a wash to treat dermatitis, eczema, pruritus, measles and chickenpox rashes. They are applied as a poultice to treat sprains, wounds and contusions. As a douche, they are used to treat inflammations of the uterus. 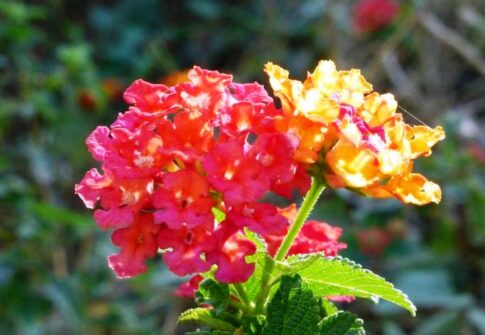 The root is sweet and bitter tasting, refrigerant, antifebrile. The decoction of the root is used to treat influenza, cough, mumps, incessant high fever, malaria, cervical lymph node, tuberculosis, asthma, toothache, headache, inflammation, gonorrhoea and leucorrhoea. The  powdered  root  in  milk  is given  to  children  as a cure for stomachache and as a vermifuge. Similar to roots, the flowers also have a sweet taste, mildly cooling and haemostatic. The decoction of the dried flowers is used in the treatment of haemoptysis and pulmonary tuberculosis.
Lantana camara oil is used in the treatment of skin itches and as an antiseptic for wounds.  The oil decoction is externally applied to treat and manage leprosy and scabies. It is applied as a poultice on rheumatic joints. The oil is spread  on  leaves,  warmed  over  low  flame  and  applied  on  the affected  part. 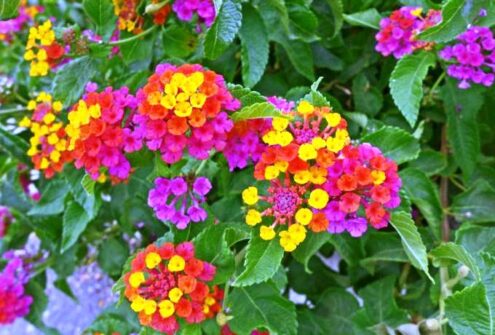 The Lantana camara plant has been observed to possess antimicrobial, fungicidal, insecticidal and nematicidal activities. The medicinal potential of Lantana camara may be attributed to some of the chemicals in it, including Lantanoside, linaroside and camarinic acid, caryophyllene-like bicyclic terpene, lantanine, and verbascoside.
The aromatic leaves are used to make tea. The sweet tasting drupaceous ripe black fruits are eaten in handfuls especially by children as a snack. However, some reports mention the toxicity of the unripe fruits. The plant stalks are used as raw material for paper pulp. It is  used as  a  hedge  to  contain  or  keep  out  livestock and the twigs  and  stems  serve  as  useful  fuel  for  cooking  and  heating in homes.