In the Congolese capital, as in the rest of the country, cultural spaces are almost non-existent. Kin ArtStudio is therefore an exception with its aim of stimulating and creating a place where various artists can express themselves. We paid a visit to the Centre.

Located in Kinshasa, the Kin ArtStudio was opened in 2011 by the Congolese artist Vitshois Mwilambwe Bondoy with the aim of encouraging creativity in the field of visual arts and other forms of contemporary expression, reinforcing the ability of young Congolese artists and promoting exchange between artists the world over.
Kin ArtStudio occupies a large space where once there was a factory of wax fabrics. It has more than ten studios for artists as well as offices, a library, a restaurant and more. At least 150 artists, mostly Congolese, have passed through this house. Some of them took part in workshops and art exhibitions in Africa, Europe, and the United States. 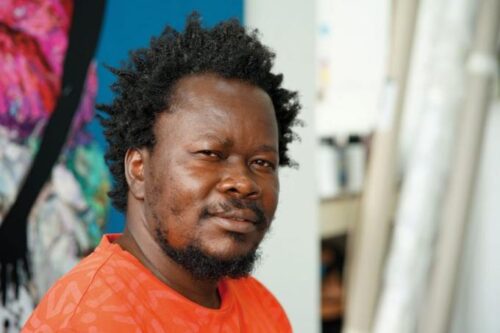 At Kin ArtStudio, painting, sculpture, photography, video, and design are combined. The artists concentrate their gaze on the historical, cultural, and intellectual patrimony of their country, questioning the succession of historical moments from the time of the Belgian Congo to Mobutu’s Zaire and up to the present day.
The richness of its land, the extent of its territory, its great ethnic diversity, its cultural specifics and, of course, the violence it suffered in its spiritual, economic, and political identity give this country a unique dimension and a far from ordinary destiny in the entire continent.

Two intertwined histories
We met Nathanaël Mutelezi Maza as he sat on a high stool, concentrating on mixing different colours of paint. He is using aquarelle, pastel, and a pen. His still incomplete picture is of a woman desperately looking at the ground. The image recalls the history of the Democratic Republic of Congo (DRC), says Nathanaël, “My picture represents a woman who lost many members of her family during the recent war in the DRC. This work seeks to recall this reality so that it may never be forgotten”.
Nathanaël is 23 and studied at the Kinshasa Institute of Fine Arts. There he was interested in contemporary art until he began to attend competitions in modern art. In 2018, he met the founder of Kin ArtStudio, Vitshois Mwilambwe Bondoy, and with him began an artistic career that has lasted up to the present day. 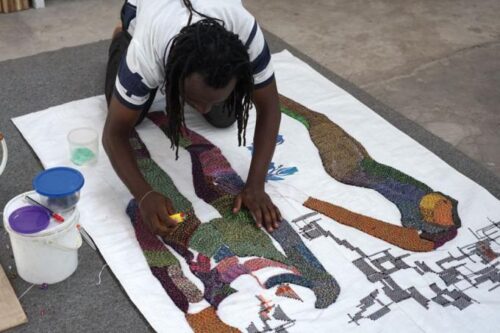 Going through the ArtStudio, we were struck by a picture by an artist called Aristotel Mago hanging on the wall. The work seems incomplete since none of the three figures represented has a head. Three other works laid out on the floor had the same characteristic. This is his way of expressing the resistance of the African people: “We sometimes live here in Africa as if we were extra-terrestrials. I often ask myself how we can overcome this situation of poverty imposed upon us. Resistance is so strong that a woman manages to live by selling five tomatoes and with this income, she buys food and sends her children to school. This is not normal but it is how we live”. 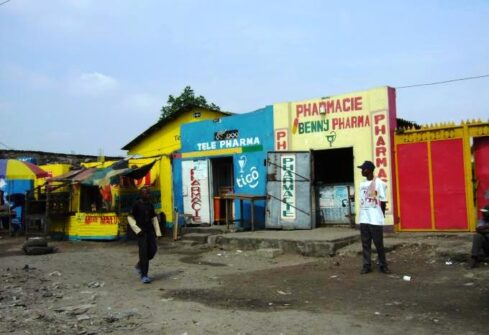 The works of Aristotel contain his personal experiences that are connected to each other and become questions for society. One thing that has already become part of his life is the woven plastic bag that has supported him while producing his works. In fact, it is not just a bag but his own personal history: “I was brought up by my grandmother in very difficult times. She used to sell plastic bags and I helped her to support the family. When I began my artistic career, I remembered my grandmother … and the bag. I drew designs on it and then I sewed the vertical and horizontal lines that formed the framework and that is how I am still working. Nothing happens by mere chance. It is the reflection of my personal history and a society marked by years of dictatorship. It is the history of a population troubled by the political and social situation”.

Maker of dreams
When the founder of Kin ArtStudio Vitshois Mwilambwe Bondoy was still only six years of age, he liked to copy photos he saw in magazines his father would buy. After discovering his artistic vocation, his parents sent him to the Kinshasa Institute of Fine Arts where he studied from 1994 to 1999. He was to exhibit his work in professional venues. Some of the postcards he designed and sold in school have been displayed in the same school and at the Academy of Fine Arts. He began to frequent the library of the French Institute where he discovered the riches of contemporary art and some renowned artists who led him to take a different view of art. 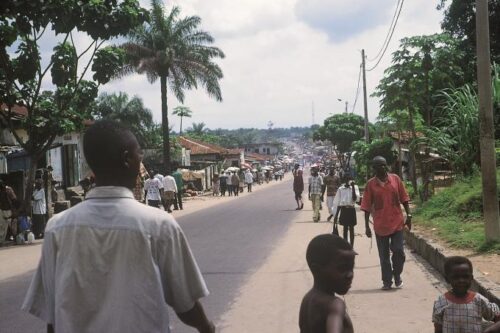 Kinshasa is the capital of the Democratic Republic of the Congo. It is the largest city in Africa.

From 2008 to 2010, Vitshois continued his training at the School of Decorative Arts in Strasburg and at the Rijksakademie Van Beeldende Kunsten in Amsterdam where he met artists, curators, theorists, historians, and art critics from all over the world.
He now lives in Kinshasa where he works to promote the visual arts and other forms of contemporary expression and facilitate exchanges between young Congolese artists and artistic initiatives in all parts of the world. For more than a decade, he has been organising exhibitions and holding workshops, but he is also responsible for one of the main programmes for artists and curators in the DR Congo. In 2019, he organised the Congo Biennial, the first international biennial of contemporary in Kinshasa which, with its first edition, brought together almost forty artists from all parts of the world and more than 100 works in four different venues.
Vitshois Mwilambwe Bondoy says that there are many artists but there is no one to accompany them in their process of learning and producing. He states: “I have seen many highly talented young people and, at the same time, I was surprised to see that, apart from the Kinshasa French Institute, there was no platform in the DRC to develop their abilities, no professional art gallery where they could exhibit their work and nowhere for them share with other artists. Seeing that the government had failed in its mission, I took on this commitment, having gained experience in other countries, to accompany young artists so that, once they have finished their studies, they may not waste their talents but make art their life’s work in their own country and abroad”. 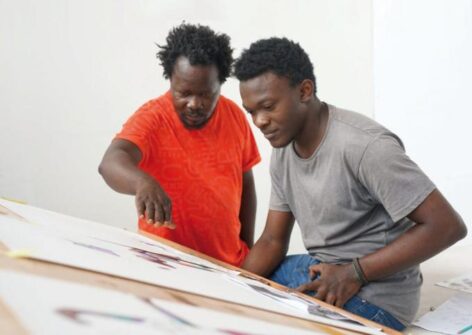 The founder of Kin ArtStudio is moved by the conviction that art, as a reflection of society, ought to contribute to cultural and economic development and also improve the image of the country: “the artist participates in the development of his country, challenges the surrounding reality and seeks to decolonise the mentality so that people may take control of their own lives. Apart from aesthetics, it reawakens the sleeping population. Our role also consists in transmitting hope to people, showing the positive side of our situation and denouncing the pathologies they suffer as a people. In this way, we help those with a passion for culture to see the world in a different way”. 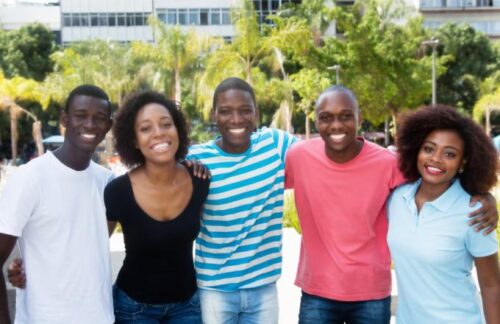 As a curator, Bondoy contributes to the development of the Congolese scene. He attracts well-known artists to work and display their works in Kinshasa, bringing them face to face with the reality of the city. Now, thanks to a network of international exchange, the art producers are invited to other countries to share experiences with other artists. This takes for granted long-term accompaniment that requires not only that they are helped to concentrate on their work but also to reflect upon themselves and their work as artists.

The ancestors
The first Congo Biennial in 2019 was attended by forty artists, designers, architects, art historians, curators and art critics from all five continents. The second is planned to run from 16 September to 23 October 2022. The theme of the exhibition is ‘The Breath of the Ancestors’, and it will be on display in various venues of the capital city. It will also be integrated with workshops of cultural journalism and art criticism as well as training workshops for visual artists and works centred on cultural learning. Since remembrance of the ancestors is deeply inscribed in a large part of African culture, the artists may express the close relationship the elders have with the world and with the dead. In Africa “The dead are not dead”, as the Senegalese poet Birago Diop once said. (Open Photo: The Kin ArtStudio)