It is one of the most iconic of the African land mammals. It lives in water but cannot swim. The hippopotamus implements strategies that enable it to stay afloat in all circumstances. Discovering its secrets.

Weighing up to and even more than 3 tons, the hippopotamus has serious flotation problems. The rhinoceros has the same problem but in the case of the hippopotamus, the inability to float is something of a paradox since it spends more than half its life in water.
There are but a few rivers and lakes in Africa that do not teem with hippos, one of the few mammals that may be considered amphibious. 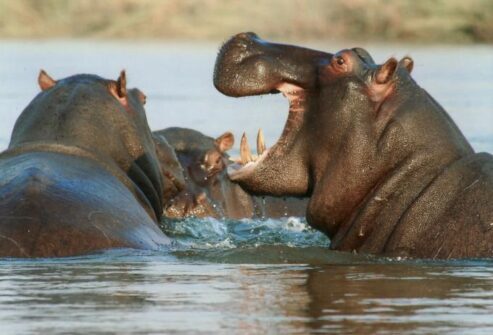 Even though its skin is thick, it does not tolerate exposure to the sun. Since it is very permeable, the skin of the hippo leaves the animal dangerously open to dehydration. The pachyderm avoids this by staying in the water for almost the entire day. It is only when the sun has set that it leaves its comfortable environment and ventures onto land to graze and return to the water before the sun rises again.

Riverbed galloper
The hippopotamus carried out most of its physiological and social functions in water: there, the extremely territorial males actively show off their status and the other individuals manifest remarkable sociability, sharing a large number of restricted spaces with relative tolerance.
On land, instead, hippos carefully avoid any sort of social interaction, even with individuals belonging to the same herd.
In water they form couples and give birth; nevertheless, these large pachyderms are unable to swim. 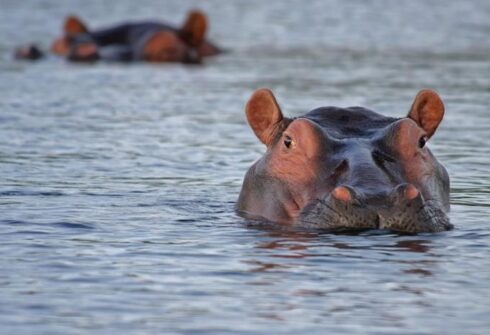 The hippopotamus generally lives in the shallower parts of rivers, ponds, and lakes where the water level allows them to remain submerged and to come to the surface to breathe simply by raising themselves on their four legs. Even so, they are more comfortable where the water is rather deep. There, being unable to swim, the only means of locomotion available to the hippo is to ‘gallop’ on the bottom. It comes to the surface to breathe by thrusting itself upwards with its legs from the bottom and leaping to the surface. It was precisely its characteristic of galloping on the bottom that gave the animal its name, ‘hippopotamus’ which comes from the ancient Greek signifying ‘river horse’ (hippos = horse and potamos = river).
Nights are a time of much activity for the hippo and it travels great distances – even as much as 30 or 40 kilometres – to find the best pastures and fill itself with a quantity of fodder amounting to 2.5% of its body weight. It then returns to the water to rest, and sleep submerged.

An amphibious life
When it sleeps submerged, the animal is able to reduce its heartbeat to 25% of its normal rate, reducing the flow of blood to peripheral areas and concentrating the blood (carrying oxygen) in its vital organs. This process, called bradycardia, allows the hippo to remain submerged in a state of apnoea for as long as 5 minutes after which it automatically awakes and goes to the surface to breathe, usually with a noisy blowing of air from its nostrils. 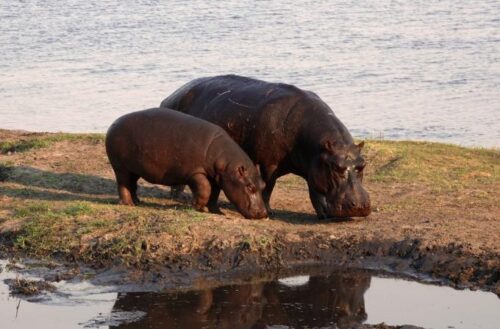 Africa’s most dangerous animal
Accidents between humans and hippos are numerous and often fatal. Among the records it holds is that of claiming more human victims per year than any other animal, including the great predators. Why is it so dangerous?The hippopotamus is a herbivorous artiodactyl that feeds exclusively on grass which it grazes like an enormous mower with its broad, strong lips.
Unlike most herbivores, however, it has a very particular set of teeth with lower incisors and highly developed canines (the lower canines may reach up to 50 cm), which are constantly kept sharp. 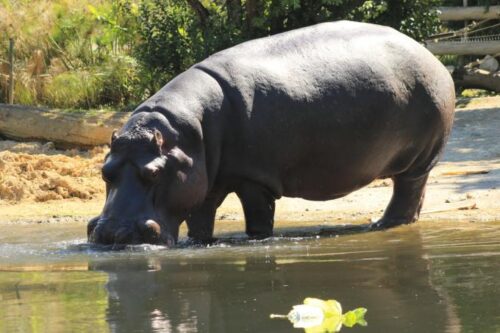 The enormous mouth may open as wide as 150 degrees and the jawbones have powerful muscles. The jaws are armed with powerful tusks that have no feeding purpose but serve exclusively to combat enemies, predators and rivals and are capable to cutting in two a crocodile or a fibreglass canoe.
The dominant male hippopotamus is extremely territorial in water; it tolerates other males only if they maintain a subordinate attitude and they do not hesitate to engage in violent fights with any who dare to challenge its hierarchical position. During these duels, they inflict deep wounds on each other with their sharp tusks, often leading to the death of one of the contenders.The females are especially protective towards their offspring and do not hesitate to attack to defend them from any perceived threat.It is well known that travelling on African waterways may expose one to the danger of becoming the object of the fury of these enormous mammals. 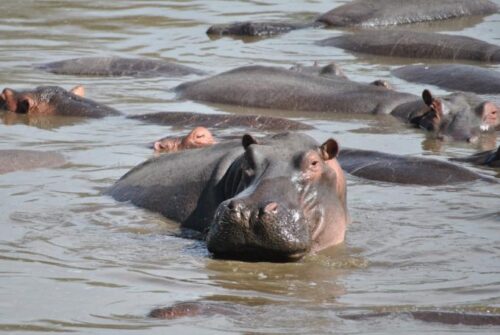 Hippopotamuses, moreover, are not confined to national parks or nature reserves but live in all sorts of environments where water and fodder are present. They are often found near villages and people often use the footpaths created by hippos to go to the rivers or move easily through the bush. This renders more probable accidental encounters with these animals. On land, the hippopotamus does not feel as comfortable as in water and this makes it particularly aggressive.  A sudden encounter with a human blocking the road may cause the animal to become aggressive out of fear, or to trample the person with its three-ton body while attempting to return to the safety of the water.
A hippopotamus will never pretend to attack before doing so. Instead, it attacks with deadly intent, at speeds up to 45 kph, covering a distance of 20 metres in a second and a half or 10 metres in less than a second!