For months he travels in an armoured car and an armed police escort. He did not ask for protection but the local government, was forced to provide it due to international pressure.  “I am not afraid and I am sure God is on my side”, says Mons. Rubén Darío Jaramillo,
Bishop of Buenaventura, a port city in the department of Valle del Cauca, Colombia.

He received several death threats for having denounced the violence and corruption that afflicts Buenaventura city. “There are powerful groups that do not want their abuses to be denounced. I am acting responsibly”, the bishop says.
The government has taken the threats seriously as has Pope Francis who has sent him several messages and asked the Nuncio to accompany him.  Jaramillo continues to visit all parts and “spends time among the people of God “. But now he does so in an armoured car and three more as an escort. “I am more worried about the safety of the people than my own “, the bishop continues. 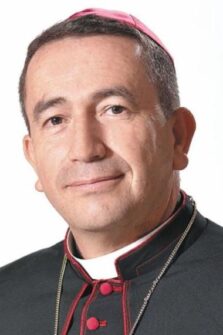 The strategic position of Buenaventura makes it an important city for Colombia’s economy and the Pacific region in particular. The highway between Buenaventura and Cali is one of only two roads that connect the Pacific Coast with larger cities in the interior. The port was expanded with a major injection of foreign investment to become the largest deep-water commercial port in South America and the busiest in Colombia. It is now among the ten most important ports in Latin America. It manages approximately 75% of Colombia’s internationally traded goods, generating large profits for corporations and contributing significantly to Colombia’s tax revenues.
Due to its strategic position and its advantageous road and river transport routes, Buenaventura is also a trading corridor for illegal goods. In recent years, trafficking and micro-trafficking of drugs and arms have increasingly contributed to violence and displacements among local communities.

War between the cartels
The 500,000 inhabitants of Buenaventura live in terror of the violence between “Los Shotas” and “Los Espartanos”.  Almost every day, violent deaths are recorded. “ The deaths occur mainly in the life-or-death struggle between two criminal groups, the Shotas and the Espartanos which began with the division of La Local band. Since they separated, the two structures have been putting pressure on children and young people to join one of the groups “, says Mons. Rubén Darío Jaramillo.
” Besides being an important port, this city in Valle del Cauca has a number of estuaries, swampy areas facing the sea, through which great quantities of drugs are sent to the United States through Central America. The criminal are fighting over the more profitable ones. At other times, they kill out of revenge or in retaliation when someone is suspected of having stolen drugs or informing the police.
There are many innocent victims, especially children and old people caught in the crossfire. 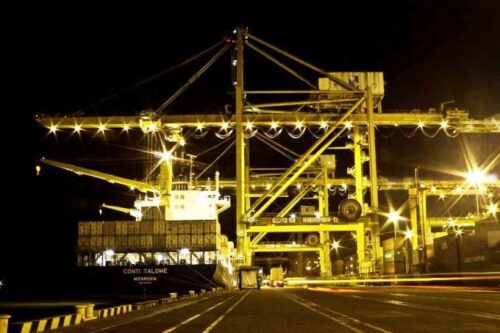 The port of Buenaventura is the busiest in Colombia. (Photo: Colombia Reports).

The bishop comments: “ In reality, all the people of Buenaventura are hostages of the bands who have absolute control over the city. The hostage money paid for some kidnappings is as much as two or three hundred million Pesos (€47,000-€70,400). The whole economy of the city is in their hands.” “One band leader controls the meat business and only those who pay him are authorised to sell it “, the bishop says. It is the same in the case of eggs, or onions and all the rest, even the roadside benches. Lawbreakers are fined up to €3,500. The payment of extortion money, now called the vaccine in line with the times  “strangle the small businessmen seeking a better life “. Especially these days when “people have to pay someone day after day “.
The people are afraid to report these crimes “and do not trust the institutions “. Trapped in paralysis and resigned to their fate, they say: ‘It is time to pay up or leave the city’. Their only hope is the Church which accompanies them consoles them and offers help in the form of food, accommodation and various social projects.
It was probably because of this that, when a person in the sphere of influence of the bands was told to kill Jaramillo, he decided to inform a priest. He did this knowing that his own life and the lives of his family were in danger “, the bishop commented.

Against criminal gangs
Moreover, besides the local cartels, the periphery of the city has seen the arrival of the ELN guerrillas, the AGC paramilitary group and the dissidents of the demobilised FARC which have fought for control of the drug routes towards the port and the coastal swamps.  The situation has not improved but has worsened after the demobilisation of the FARC in 2016. Beforehand, “there was just one commander controlling the while area and he was like the state “, the bishop says. It is regrettable that no alternative was offered to the former guerrillas. “If the state does not provide them with work, education and security they will take up arms again as that is the only think they know. 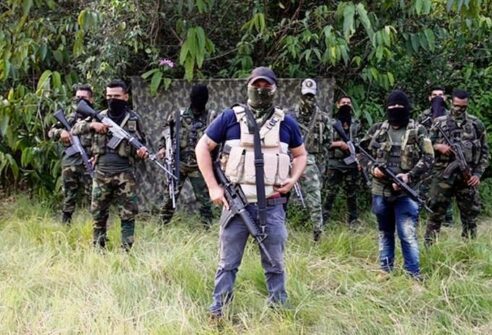 The whole economy of the city is in the hands of the criminal groups. (Photo La Opinión).

At the moment, Buenaventura is the showcase of the whole situation of the Pacific regions and those of the South West. Its natural resources (timber, oil, metals such as coltan), the rivers that run to the sea and the “immense” areas “ that are very hard for the state to police ” have come under the control of criminal gangs. Some have also come from Mexico. It is the area of Colombia that produces the most coca leaves, with 57,897 hectares cultivated, according to a United Nations 2019 report. “This is where arms come into play “.
The bishops of the region have become organised and shown their moral and material support for Mons. Rubén Darío Jaramillo Montoya  “who has been receiving threats to his integrity and life, as well as others who serve the community” . “We extend our solidarity to the different communities which he accompanies in their suffering”,  wrote the bishops of the Pacific and the south west of Colombia who recently met to examine the grave problems of the area. 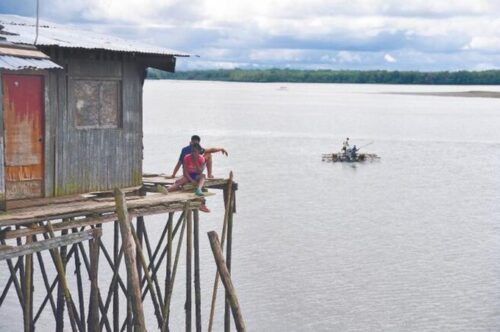 The bishops of Apartadó, Quibdó, Itsmina – Tadó, Buenaventura, Tumaco, Guapi, Popayán, Tierradentro, Pasto, Ipiales, Cartago, Buga, Palmira and Cali wrote in their communique : “We have been able to approach the situations of uncertainty, poverty, suffering, death and despair generated by the confluence of a different sort which, unfortunately, we perceive and condemn and are continually increasing such as; drug trafficking, the increase in the number of armed groups, corruption, extortion, the loss of faith and values, the ineffectiveness of broad public and private sectors and the abuse of our common home”.
Faced with this difficult situation, the Bishops reiterate: “As Pastors, we are not content to accept these situations; on the contrary, we are commit ourselves and we exhort those in government and all our people to commit themselves to working decisively for global solutions in the medium and long term, that render possible the transformation of this sad and distressing situation. We will continue to act as facilitators of dialogue and peace”. (C.C.)