The roots of puppet shows in Africa are as old as the myths and legends. Today, they are used very much in education but also as a way to condemn political power and corruption.

According to a myth of the Ibibio people of south-east Nigeria, the puppet theatre was born in the land of the dead. In this subterranean world, such representations are frequently carried out. One day, a certain living man descended into the land of the dead and witnessed one of these shows. When he came back to the land of the living, he taught them this art. However, that caused his death.
In Angola, an Ambundu legend tells how a woman died. When she was about to be buried, she came back to life and started speaking. She returned to her village and went to the house of a carver and took possession of a small statue that she impregnated with magical substances. As a result, the figure came to life and began to produce images showing hidden objects. In Guinea, it is said that the birth of the puppet was caused by the appearance of a mysterious speaking object that was found in water. A woman took it to the village and showed it to everyone there but the mysterious object would not speak. After that, the woman decided to send away the men. The object then began to speak, telling its sad story and how it had no husband, causing it to remain in the water.
In Malawi, a Chewa legend tells how a man who had no children began to model two small images of clay. One night, they came to life and began to act like people; this went on until they disobeyed their adopted mother and were going away, following a footpath. They were drenched by a cloud burst and once again became the clay they were made from.

The Africa puppet theatre is a pedagogical instrument which serves to transmit ancestral wisdom, especially to new generations. It is also used to criticise behaviour. Through laughter and satire they make fun of politicians and local authorities. It is also a means to transmit ancestral wisdom by means of theatrical spectacles at important times in social life, at initiation and fertility rites, in the celebration of cycles, funeral rites and the worship of ancestors. It is also used for social criticism. The testimony of the puppets carries elements of the joy of life, a utopia, a plan or a dream for the country, a person or a community, the memories of prosperous times of the past that it would be good to copy in the present and in the future.
In some cases, the puppeteer accompanies the healer or the witch doctor and takes part in the diagnosis of the sick person. 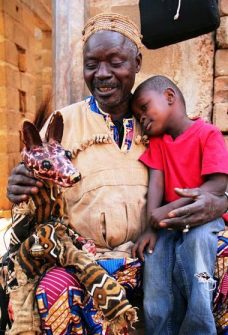 At present, especially in urban areas, puppets have become a form of entertainment that is used in theatres, television, the cinema, in musical videos and in behavioural therapy sessions and during courses of formation in development.
South Africa is well known on the continent for its growing group of artisans and puppeteers. This is also helped by the fact that it hosts the largest international festival of puppet shows.

In such western African countries as Mali, Benin, Togo, Nigeria and Ivory Coast, puppets tend to be more expressions of the lives of the people. In Mali, this ancestral heritage is present in the daily lives of eight people out of every ten.
Yaya Coulibaly, originally from Mali and one of the master artisans, has contributed more than any other to preserving and spreading the puppets in his country and worldwide. He is the heir in a family of puppeteers who, for six generations – from the 15th century until today – preserves the precious treasure of the art of making puppets as a record of the oral patrimony of the Bambara kingdom of Segou. The puppets of Yaya Coulibaly represent different aspects of the Bambara mythology in relation to actual problems. Coulibaly’s workshop is located in the Magnambougou quarter of Bamako, the capital. He has a collection of about 25,000 pieces comprising masks and puppets as well as collective or giant puppets. The themes and colours of the puppets have their own symbolism.For example, one of the pieces is a mythical figure: the head of an antelope with its horns covered by six personages that symbolise the entire universe. Another is a representation of Captain Sanogo, the leader of the 2012 coup. Then there is Vilaine, mother of King Soundiata Keita, the founder of the Mali Empire, used in one of his exhibitions in 2016.Coulibaly began learning the art of his father when he was only six years old. He is now teaching thirty puppeteers whose futures may well be decided by the Kabako Theatre Troupe Company of Yaya Coulibaly. The passion for the art of puppets is also to be found in other people of the country. Among these are the Sogo-bo society, a theatrical association which collects Bamana traditions; Somoni and Bozo of the central south of Mali, as well as the Troupe Nationale des Marionnettes du Mali in Bamako. 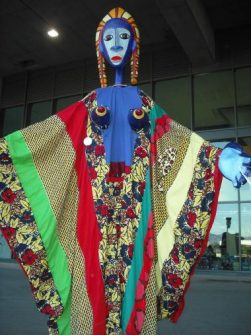 The puppet theatre of the Bambara of Mali was discovered towards the end of the nineteenth century and became the first African puppet theatre to be known in Europe.
In its most ancient form, the show materialises the spiritual beings that govern the destiny of the community, the protector fetishes, so that hunting and fishing may be successful and that peace may reign in the village. The puppets are moved from below with rods through a collapsible theatre called a kalaka that is made with a structure that supports a tent. They sometimes have copper decorations, especially among the Marka. The puppets are kept in a hut where women and children are not allowed to enter.
In other African countries: Jean-Pierre Guingane, is the instigator in Burkina Faso of the International Marionette and Theatre Festival at Ouagadougou. In the Congo, together with other sorts of puppets, we find the kebe-kebe of the Mbochi and the Kuyu that celebrate great personalities of the past. These figures are moved from below by wooden rods. The puppeteer is hidden by a hood and keeps the head of the figure higher that his own.
In the city of Ketù, for example, close to the border between Nigeria and Benin, the Yoruba operate the mask-puppets, called gledé in a propitiatory fashion. They appear in rituals celebrated at the end of the rainy season and at the start of the dry season. The puppets are carried on the head and the figures that emerge high above the crowd are moved, during the dance, from below, by cords controlled by the dancer who wears them. The movements of the puppets and those of the dancers are integrated into a single action.
In Togo, the Compagnie des Marionnettes of Danaye Kanlanfei in the capital, Lomé, is a school which, besides teaching the art, assists the youths to construct puppets using recycled material. The representations made by this company always follow themes of the environment and anti-corruption.
In Kenya, Chrispin Mwakideu uses puppets to teach children, making them aware of AIDS, malaria and human rights, both on the streets and by way of TV programmes.
Fernando Felix