To recreate the social and interreligious fabric of a society torn by war, it is necessary to provide opportunities for people to meet, especially the youth, by means of formative and cultural activities.
The young people try to mend what politics has divided since they feel part of a single people.

“The most important thing for us is not the theoretical principles but how to recommence living together”. This was the reply of Fr. Moses Otii, a Ugandan Comboni Missionary and parish priest of the parish of Our Lady of Fatima, one of the largest in the Archdiocese of Bangui, when asked to recount his experience in the ambit of interreligious dialogue.
This is the heart of the matter: to start again by creating opportunities for Muslims and Christians to approach each other and once again to live and work together. It comes after they have been at the centre of violent political instrumentalisation that led them to be falsely associated with the Seleka and Anti-Balaka rebel groups that have fanned the flames of conflict in the whole territory of the Central African Republic since 2012.
This has brought about the latest in a series of political crises mistakenly interpreted as a religious conflict between the main faiths of the country. However, the causes that led to the clashes are to be sought elsewhere: in the way the government abandoned vast peripheral territories and in the greed of the rebel groups who want to get hold of the immense mineral resources of the country. 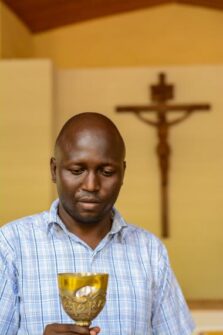 Father Moses shows the chalice pierced by a bullet during the May 2014 attack on the parish.

Not even the parish of Our Lady of Fatima has been spared. It is located a few hundred metres from Km5, the economic powerhouse of the capital and with a Muslim majority. There were repeated attacks, massacres and attempts to destroy it, resulting in dozens of deaths, including the killing of two priests. Since 5 December 2013, more than six thousand displaced people have found refuge there, a situation that has lasted more than three years.
In the midst of this tragedy, Fr. Moses never gave up. That which gives him the strength to remain in such a difficult situation is the faith of the people. He realises more and more that the presence of the Church is their only sign of hope. “If we had left the parish, it would have been as if we quenched the last flame of hope. Our presence is vital”, the young missionary priest says. Father Moses understood it was necessary to do something concrete.  He prayed, reflected, questioned himself and then asked for collaboration to set up a working team. Together, they began to dream and think up initiatives. “With all the atrocities of recent years, we began to consider what we should do and start some activities, with just one thing in mind: to create the right conditions where Christians and Muslims could meet together”. 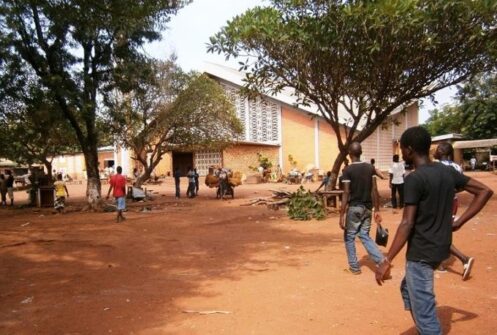 The parish of Our Lady of Fatima is one of the largest in the Archdiocese of Bangui.

The first of these initiatives was a course of English lessons which was attended by around 120 young people of whom 80 were Muslims. Fr. Moses recalls this first experience: “At first it was not easy, due to the presence of the Muslims. Then, as time went by, the young people realised that those Muslims they were meeting were people like themselves, with the same desires and dreams to be fulfilled. This first exchange was positive, and it encouraged us to continue moving in the same direction”.Listening groups were set up to help the displaced to escape from the spiral of hatred, anger and revenge. The first video about peace entitled ‘The Dove’ was shown in a number of displaced people locations, arousing animated debates on the theme of reconciliation and forgiveness.At the end of 2019, a cultural centre for young people was opened with the title of The Martyrs of Fatima featuring a library, a conference hall, literacy courses, informatics, robotics, psychological counselling, a film workshop and a music studio. Many Muslims attend the numerous training courses on peace and conflict management and resolution. 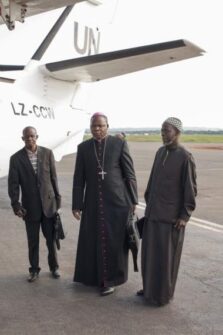 “We are preparing the ground for forgiveness and reconciliation”, Fr. Moses explains, “many people tell me how they have lost everything, their families and homes and ask how they can forgive, how they can be reconciled with the people who cut down their nearest and dearest. It is necessary to prepare the ground because forgiveness is a gift of God”. Fr. Moses explains the deep meaning of the new centre: “We have to overcome the sense of being victims and become authors of our own destiny. We have suffered and lived through bad situations, but this place of death must become a place of life. From being a place of wounds, it must become a place of healing”.The missionary repeats the importance of interreligious dialogue that is firmly rooted in the lives of the people: “We are creating spaces where the people can meet and those of different religions can mix together”. Besides the cultural centre, a pharmacy with a laboratory for tests has been added. The aim is always the same: to care for people and heal their wounds by means of encounters.
Fatima parish is becoming a space where dialogue between the religions becomes abundant life.
Anour Limane, president of the Central African Islamic Youth Circle for Development tells of some of the initiatives of recent months in which young Christians and Muslims took part at Fatima parish.
Last September, the Muslim and Christian communities organised together a Festiphoto de Fatima, an online photo exhibition that enabled young Central Africans to demonstrate their creativity by showing the other face of the country, one much different from that of death and destruction that young people were used to seeing, so as to allow the abundant human and environmental beauty of the Central African Republic to emerge. In December, a Festipaix de Fatima was held. This was a film festival aimed at promoting the culture of peace and dialogue between the cultures and religions by producing films under the direction of Julio-Cyriaque Mbetheke (Fatima parish) and Fatoumata Dembele of the Circle. Both initiatives met with enormous success, with many of the youth taking part in them.
Anour comments: “As the community of young Muslims, we faithfully frequent the Fatima youth cultural centre. Our students also frequent the library, an occasion for them to talk to the youth of the Christian community. We want to relive the communion that existed before the crisis”.Father Moses recalls: “When I first arrived in 2012, Christians and Muslims lived together in this quarter.  The parish was full of life and initiatives, a place of encounter between many people of different religious persuasions. Muslims, Protestants and Catholics would come together to watch films, take part in sporting competitions, and celebrate Christmas together. The political-military crisis that broke out towards the end of 2012 put an end to all of that”. 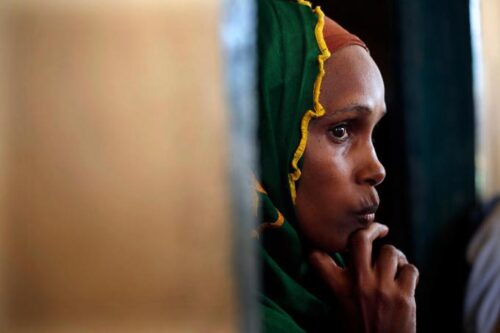 Muslim and Christian children would sit together side by side in the school benches in front of the parish. Sr. Charlotte, who is headmistress of the Catholic school Notre Dame de Chartres has had to work on the problem of healing the wounds left by the war. “In our school, the majority of the children were Muslim. After the war, both teachers and parents refused to have their children go back again to the school. They had suffered too much. We prepared them little by little to accept all the children because this school makes no distinction based on religion, social class or ethnicity”.When the school was reopened, the children who had not seen each other for so long were happy to meet again with their classmates and they immediately began to play together. “It was necessary to work for a long time to get them to understand that we are neither Anti-Balaka nor Seleka, but we are all brothers and sisters”.
He recalls: “One day, during an assembly, a Muslim mother told the Christian parents that the school protects all their children, both Muslim and Christian and prepares them to face their future with commitment”. Whereas politics has divided the country, setting one against the other, the youth want to commit themselves entirely for a different future, in a country where 85% of the population is made up of young people who are uneducated and therefore more easily manipulated.
Anour Limane concludes: “We must not allow ourselves to be manipulated by the powerful; all those who want to divide us. We young people of various religions have one thing in common. We all belong to the Central African Republic”.