The wars in Syria and Iraq are (mostly) over, but the region’s rich cultural heritage remains at risk.

Mosul, Aleppo, Baghdad – whose Iraqi Museum was looted after the United States invaded Iraq in 2003 – Damascus and Palmyra are some of the oldest cities in the world. Life and civilization have continued and evolved in those same areas for at least five millennia. However, after surviving multiple invasions from Alexander’s armies in the IV century BC to the Romans, the Muslims, the Mongols and the Turks, in the first twenty years of the 21st century, they have become symbols of unbridled vandalism. War and ideological fanaticism have combined to destroy the lives as well as the heritage of average Syrians and Iraqis. While some of the artistic and architectural monuments were destroyed as collateral damage during the course of battles, others were destroyed deliberately in fits of fanatical fervor.
The disregard that modern armies (and the policies guiding them) have shown for the culture of Syria and Iraq has also had the effect of reminding the world of the depth and significance of that heritage.
At an archaeological level, the wars were only the latest and directly destructive element. The damage began much earlier. Iraq’s conflicts 1990-91 and 2003-2018 were preceded by periods of intense sanctions, which deprived the State of vital resources to fund even the most basic of services and infrastructure. And, in that sense, as the country focuses on reconstruction now, Iraq’s archaeological heritage will most likely not reach the top of Baghdad’s list of priorities.
Therefore, the effort to protect Iraq’s considerable artistic and cultural heritage, spanning at least 40 centuries and multiple civilizations, faces considerable risk from basic neglect. 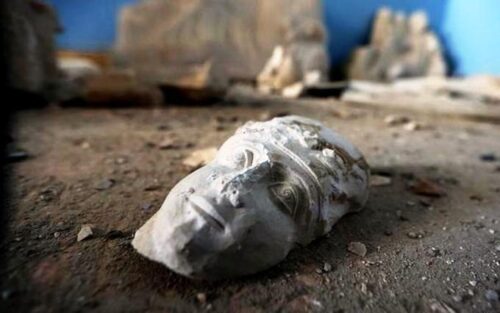 If Iraq’s heritage is to be saved, hope rests that foundations and donors from outside – and from a moral perspective those in the countries that contributed to the excessively harsh conditions that Iraq’s people were forced to endure – might be the actors of last resort. Indeed, the lack of financial self-sufficiency and the need to rebuild the country, physically and politically, might represent the biggest threat to Iraq.
The geopolitical risks, considering the continuing tensions between Turkey and the Kurdish militias, and the oil revenue redistribution disputes between Baghdad and Erbil (capital of the Autonomous Kurdish Province) can only mean one thing: the level of risk for Iraq’s heritage is very high. For nationalistic reasons – and upon visiting the site of ancient Babylon, some 70 km. south of Baghdad in 1989, the author of this article witnessed firsthand a painting featuring a portrait of Saddam Hussein and King Nebuchadnezzar and the stela of Hammurabi’s legal Code with its clear message of continuity. 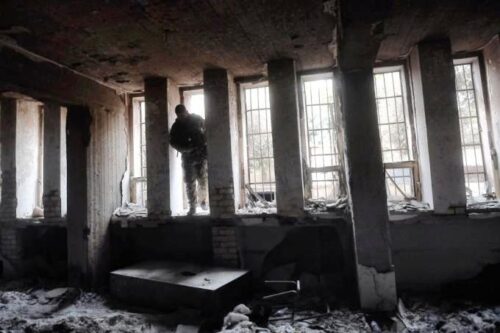 Ba’athist Iraq invested considerable funds to restore major Iraqi archaeological sites. Then, during the embargoes and wars, the institutions in charge of protecting heritage sites were entirely defunded. The Americans and ISIS were just the latest to inflict damage – though it was the most intense damage. Even if the fighting is over now, Iraq’s economic problems perpetuate material difficulties, while the socio-political conditions that fueled the divide between Shiites and Sunnis (which helped foment ISIS) remain, even if temporarily buried under the proverbial dust. Iraq’s State Board of Antiquities and Heritage is highly competent. But the institute needs funds and technical collaboration from abroad to manage the sheer extent of Iraq’s artistic heritage.

Mosul, Ancient Nineveh, and Hatra
Almost two years since the end of ISIS in Syria and Iraq (at least since President Trump declared ISIS to have been defeated) the artistic heritage in the lands of former Mesopotamia bears witness to the cultural and human devastation that this region has witnessed in one form or another since George W. Bush decided to invade an already humiliated and weak Iraq in 2003. Indeed, quite apart from the damage inflicted during the American military invasion, the occupation itself is responsible for the emergence of ISIS and its radical ideology, which encouraged iconoclastic excess and looting. 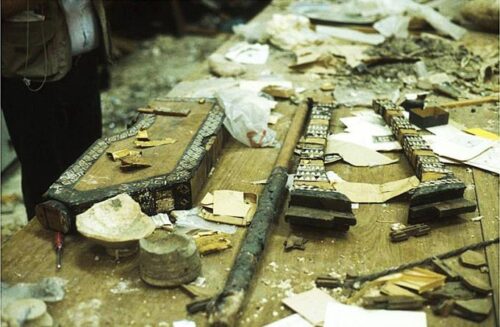 Golden Lyre of Ur (the world’s oldest known stringed musical instrument, ca. 2,600 B.C.E.), destroyed in a storeroom of the Iraq Museum in 2003.

Mosul, the ancient Nineveh, Assyrian capital built by Sennacherib, son of Sargon II, in the VII century BC, suffered significant losses. The palace, which survived countless invaders over the centuries, was looted with abandon. Prof. Peter Miglus from Heidelberg University reported significant theft having occurred at the Palace of Sennacherib. ISIS removed reliefs, sculptures, structural pieces to sell them on the black market. And of course, it would not have been possible to establish such functioning sales channels without a high degree of Western complicity.
Indeed, it’s not just Nineveh. Babylon, other royal cities in Assyria, Ur – home of Sumerian civilization – and museums in Iraq and Syria have suffered serious damage.
And while the damage perpetrated by ISIS attracted dismay and attention, the disappearance of archaeological artefacts and damage to many sites have gone unnoticed. One of these is Hatra. 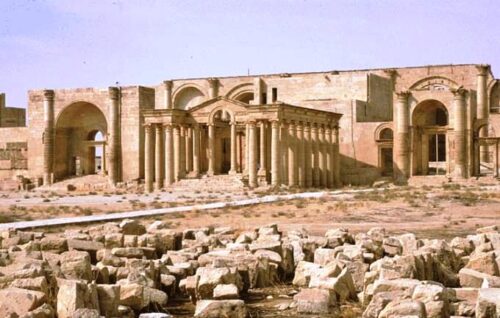 Hatra, a UNESCO World Heritage Site, located about 80 km south of Mosul is one of Iraq’s most important archaeological sites. Hatra – known as al-Hadr now – is one of the main examples of Parthian civilization that have survived. In its time (approximately 100 BC to 300 AD) it was the capital of the Kingdom of Araba and served as a religious and trade center on the edge that separated the Roman and Persian empire – and often a focus of the conflict between Romans and the Sassanid (who succeeded the Parthians). Hatra’s ruins cover – or better, covered – some 300 hectares of land featuring extant and well-preserved fortifications. 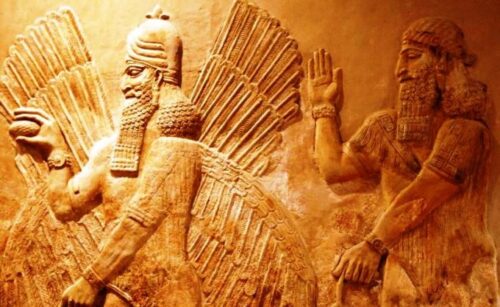 An Assyrian relief displayed at the Iraqi national museum in Baghdad.

Until ISIS damaged them, Hatra also boasted temples similar to those found in the towns with which it was linked (such as Palmyra). An Italian archaeological mission, funded by the Aliph Foundation has taken advantage of the relative calm in post-ISIS Iraq to evaluate and repair the damage caused by the recent wars. Of course, at Hatra, as at Nineveh, unless significant efforts are made toward securing the sites, there will always be incentives for people to steal the many artefacts – some in gold and other precious metals. ISIS raided these areas, but also discarded many objects, which may have proven too small or ‘worn’ to serve their needs. And many of the reliefs have survived. It seems that much of the iconoclastic rage, was actually masking a more practical kind of looting, aimed at securing funds.
Much of the archaeological heritage in Iraq and Syria has survived, but UNESCO has noted damage at least at 66 sites.