A new American bill is bringing back the cold war in Africa by summoning African states to take their sides in the war against the Kremlin. It targets countries which have close ties with Moscow. But it could accelerate the trend of United States waning presence on the African continent.

On the last 27 April, the U.S. House of Representatives adopted the “Countering Malign Russian Activities in Africa Act” by a large bipartisan majority. It is therefore certain that the new law will be passed by the Senate as well. It will direct the Secretary of State “to develop and submit to Congress a strategy and implementation plan outlining United States efforts to counter the malign influence and activities of the Russian Federation and its proxies in Africa”.
According to Peter Fabricius, from the Johannesburg-based Institute of Security Studies, this legislation aims at punishing African states which have close relations with Russia. The bill broadly describes the so-called “malign activities” as those which “undermine United States objectives and interests”. The U.S. Secretary of State will have to monitor the actions of Russia’s government and its ‘proxies’ including private military companies such as the Wagner Group. The State Department has 90 days to develop a plan to counter Russia in Africa, targeting particularly its “disinformation activities”. The bill reflects a carrot and stick policy since US aid programs will be part of its instruments and reminds of the cold war rhetoric. 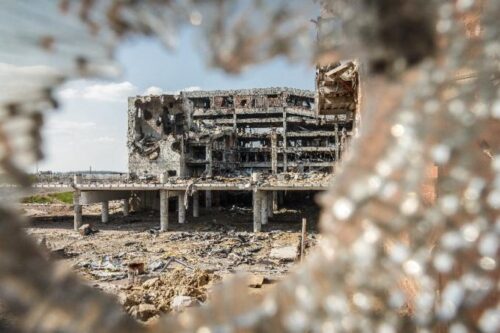 According to the Democrat chair of the House Foreign Affairs Committee, Gregory Meeks, the bill was introduced as a response to Russia’s invasion of Ukraine and is designed to counter Vladimir Putin’s efforts to “pilfer, manipulate and exploit resources in parts of Africa to evade sanctions and undermine U.S. interests”.  The legislation urges the U.S. government to strengthen democratic institutions, improve government transparency and improve standards related to human rights, labour, good governance and monitor natural resources and extractive industries. Furthermore, it aims at countering Russian efforts to invest or otherwise control strategic sectors in Africa, such as mining and other forms of natural resource extraction and exploitation, defence and security, and information and communications technology. In short, doing business with Russia becomes tantamount to a criminal activity.

Pick a side or face consequences
The aim is to force Africans to pick a side. Michael McCaul, Republican on the House Foreign Affairs Committee, who co-sponsored the bill, told on the 4 May to a congressional committee: “We must make every state choose between doing business with the free world or with
the war criminal.” 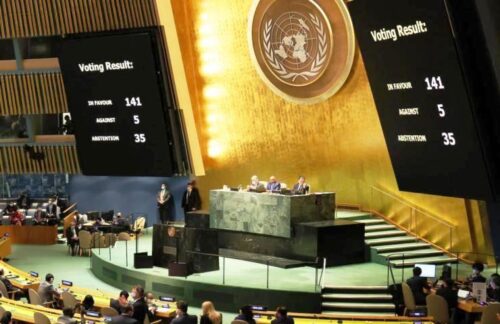 But why is Africa being targeted? One of the elements, according to African officials, is the huge frustration of American diplomats after the African vote at the U.N. General Assembly on the resolution, condemning Russia’s invasion of Ukraine, on the last 2 March. Only one country, Eritrea, which is openly hostile to Western interference, voted against it. But 17 countries abstained and 8 did not participate to the vote. Eventually, nearly half of all African states reflected a non-aligned position, meaning a loss of diplomatic influence by Washington and by the U.S.’s main western ally in Africa, France: five French former colonies abstained, another member of the French-speaking club did the same and five former French colonies didn’t cast their vote.
Uganda abstained to show neutrality as the incoming chair of the Non – aligned Movement, explained its Permanent Representative to the UN, Ambassador, Adonia Ayebare. Algeria, another non-aligned pioneer abstained as well. Most former front-line states during the period of apartheid adopted a similar position. That was the case of Tanzania and Zimbabwe. Namibia, Angola, Mozambique and post-apartheid South Africa also abstained, refraining to condemn Russia as the heir of the only super-power which backed the Southern African liberation movements. In South Africa’s case, other reasons may explain the abstention. Peter Fabricius stresses business links between Putin’s oligarch chum, Viktor Vekselberg and the ruling African National Congress which own together shares of the United Manganese
of Kalahari mine. 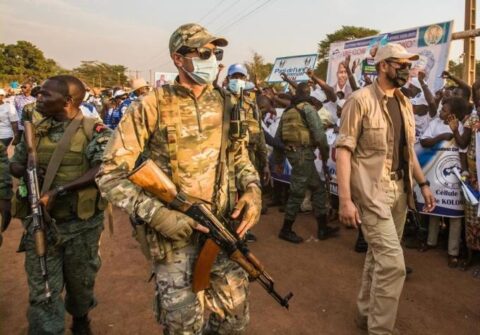 The African Union chair, Senegal, also abstained. The war between Russia and Ukraine should not be Africa’s first concern since it reminds a lot of the East-West confrontation, say sources at the president’s office. Other abstentionists were Sudan, which ignored pressures by the EU to condemn the Russian invasion and South Sudan. The tiny Burundi’s abstention aimed at avoiding to choose between jeopardizing its relationship with Russia which blocked at the U.N. Security Council several resolutions which intended to condemn the country for its violation of human rights and of the rule of law, and damaging the links which were recently re-established with the E.U. after it lifted its sanctions. Former Soviet Union allies, Congo-Brazzaville and Madagascar, abstained as well. So did Equatorial Guinea.
Among the eight African countries which did not participate to the vote, was Ethiopia, former traditional partner of the Soviet Union which is upset by United States’ decision to withdraw it from the list of beneficiaries of the AGOA trade regime in retaliation for alleged war crimes in the Tigray. Cameroon which is also deprived of the AGOA trade benefits because of human rights violations in the Western English-Speaking area of the country, didn’t cast its vote either. 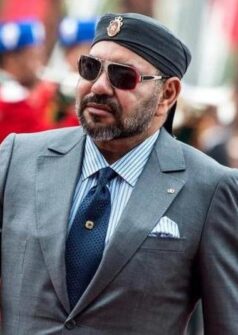 Morocco took a similar stand despite the U.S. support to its sovereignty claim over Western Sahara. Observers provide two explanations. On the one hand, since the U.N. resolution was sponsored by the E.U, Rabat sent the message that it was upset by the lack of enthusiasm of most European states in backing its claim over the Sahara. On the other hand, Rabat expressed its gratitude to the Kremlin which abstained to vote resolutions backing the Sahrawi Arab Democratic Republic at the UN. Guinea-Bissau, Eswatini, Burkina-Faso, Togo and Guinea-Conakry are the other countries which did not participate to the vote.

US concerns over Russia’s growing influence in Africa
Yet, according to Fabricius, Washington is not targeting Africa so much because of anything Africans have done but because Russia is perceived to be very active in Africa. In his opinion, the authors of the bill have in mind efforts by alleged Russian government proxies to bribe candidates in the last Madagascar elections for instance, and activities of the Association for Free Research and International Cooperation (Afric), a Russian election observation organisation, run by Yevgeny Prigozhin, who is known as Putin’s chef and believed to run Wagner. 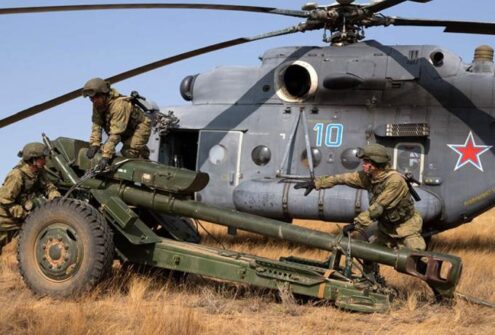 The U.S. are also concerned that Russia has turned into Africa’s first supplier of weapons. According to the Stockholm International Peace Institute, over the 2014-2019 period, Russia accounted for 49 percent of all arms sales to Africa, over three times more than the second supplier (the US with 14 percent) and the third, (China with 13 percent). According to Russian Defence Ministry sources, total annual sales reached US $ 15 billion in 2019. Algeria, Egypt, Angola and Nigeria are the main clients. And Russia’s market share is expanding. In 2000, 16 African countries were purchasing weapons to Russia. Now, the number is 21. This is partly because of Russia’s financial techniques to secure its markets. In 2006, Putin wrote off Algeria’s military debt which by then reached US 4.5 bn in return for its commitment to order $ 7.5 bn of new weapons. A similar deal was struck with Angola.
According to the Swedish Defence Research Agency, since 2015, Russia signed over 20 bilateral military cooperation agreements with African states. The last was signed in April 2022 with Cameroon, a few weeks after the launch of the attack on Ukraine. The deal encompasses exchanges of information on defence matters, national security, training of troops and support to U.N. peacekeeping operations. In February, Madagascar signed a cooperation agreement with Russia concerning the training of army officers and arms supplies. 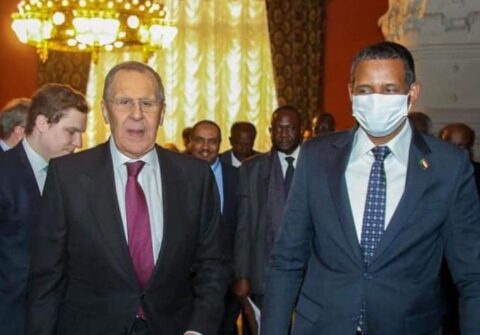 Besides, Russia is busy offering private security services for counterinsurgency training and advisory to African armies, namely through the Wagner Group of mercenaries, which in recent years has been deployed in Libya, Sudan, Mozambique, Madagascar, the Central African Republic, and Mali. Wagner suffered a setback in Mozambique where it failed to score a success in front of the jihadists in the Cabo Delgado province in 2020 and had to withdraw. Wagner was also accused of perpetrating human rights violations in Mali and in the CAR, where its arrival coincided with a linked Russian company being awarded diamond and gold mining licenses.
Yet, in a context of expanding jihadism and bad governance, inefficiency of UN peacekeeping missions and waning French influence, the Wagner Group feels a vacuum and is likely to stay in Africa. Sanctions are unlikely to change that, foresee military experts.
Russia is also far more present than the U.S. on the nuclear front. It has developed over the last decade a nuclear diplomacy which paves the way for the construction of nuclear plants, even though few African countries have gone beyond conducting feasibility studies, project costing and financing models. A few years ago, Russia and South Africa concluded an agreement which provided for the construction of eight nuclear power plants. In March 2018, the Russian Foreign Minister Sergey Lavrov revealed that Rosatom was considering nuclear research and technology centers in Zambia and in Nigeria, beside plans to build four nuclear plants in Egypt. Accordingly, there are prospects for cooperation with Ghana, Tanzania and Ethiopia. Rosatom signed also MOUs with Kenya, Rwanda and Tanzania. 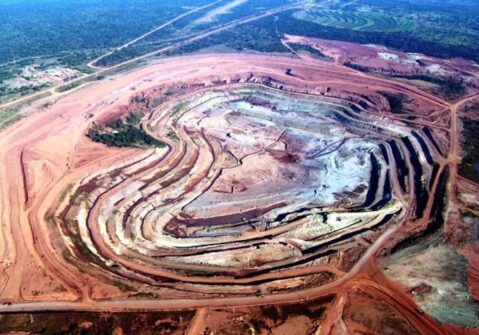 Catoca diamond mine in northeast Angola is the country’s largest diamond mine. Alrosa, the Russian miner is partner with Catoca Mining.

Owing to the importance of Russia’s interests in Africa, U.S. sanctions may have to target a number of African countries where Russian state-owned companies from the extractive sector such as Rosneft, Lukoil, Alrosa, Rusal, Gazprom and Nordgold have invested.
Angola is already suffering indirectly from U.S. sanctions because the main diamond projects of the country depend from the supply of Russian equipment and spare parts by the main shareholder, the Russian company, Alrosa which has difficult access to dollars. Other mining companies in Zimbabwe, Burundi and the Democratic Republic of Congo risk to be affected as well.
Yet, United States has not so much leverage on its African partners. On the economic front, America has become a marginal partner, accounting for only 6% of the bilateral trade with the continent as against 30% for the EU and 13 % for China. The U.S. is still an important donor with 20 percent of all ODA to Africa but less than the EU (30%). In such context, there is a risk that US sanctions maybe counterproductive and incite countries such as Ethiopia and Cameroon, already under sanctions anyway to turn increasingly towards other partners including China. (Open Photo: Chamber of the U.S. House of Representatives during speech by NATO Secretary General Jens Stoltenberg. (Photo: Congress Press)