He never existed, yet his faithful are many. Saint Simón is the fusion between the unrecognised Spanish saint and an indigenous god.

He is the primary saint in Guatemala, and you can see effigies of him everywhere, he is represented in the image of a man of means with a moustache, dressed in black, wearing a purple tie, with his cigar in his mouth, sitting in an old-style chair. Visitors in Guatemala can find one effigy representing Saint Simón in a small shrine in the municipality of San Andrés Itzapa, about 30 miles west of the Guatemalan capital, where every 28 October, the saint’s feast day, thousands of pilgrims arrive from all over Guatemala and neighbouring countries to worship the saint. Candles, flowers, personal objects, tablets, and plaques thanking Saint Simón for granted miracles fill the walls of the chapel. On that day you can breathe the typical atmosphere of fairs: people dance to the sound of marimba and mariachi, the music played by a live orchestra. 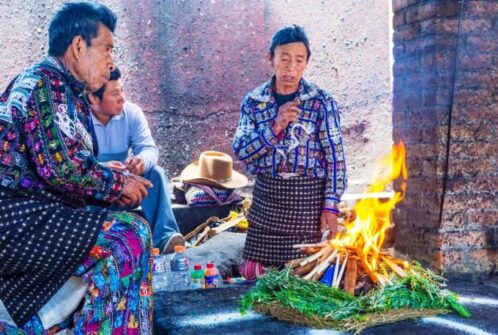 Participants in the event drink liquors while fireworks explode. You can see families eating grilled sausages, chicken meat, corn on the cob, tacos, and types of bread especially prepared for this occasion. Saint Simón is believed to be the protector of travellers and especially merchants, but also of prostitutes, homeless, alcoholics and drug-traffickers. Some pilgrims ask the saint for help, health, protection for their children, love, but also for aid with financial problems, and punishment for those who harmed them. Pilgrims bring food and drinks as offerings for the saint and the candle pertaining to their desire. They bring, in fact, candles of different colours, green for prosperity, red for love, yellow and white for the protection of loved ones, blue for good luck and money, pink for health. It is also said that some of those visiting the shrine bring black candles with them; these are people looking for revenge and for a spell against somebody.
Pilgrims hold spiritual ceremonies in honour of the saint, along with ‘limpias’ where devotees pay spiritual guides who perform cleansing rituals, in order to receive blessings and to increase the number of favours they may receive from the folk saint. 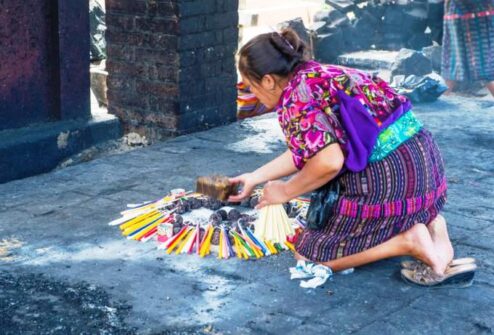 During the celebrations of Saint Simón people dance, smoke, and drink alcohol. Saint Simón allows them to; he does not impose rules or prohibitions, and perhaps this is the secret of his popularity.
He did not have to go through the rigorous process of beatification and canonization that Catholicism requires to recognise a person as a saint.
Our idol never existed as a person, his effigies carved in wood are the result of the cultural syncretism that characterizes Guatemala and the fusion between elements of indigenous spirituality and those of Christianity; that is why many also recognize Saint Simón as, or sometimes confuse him with, Rilaj Mam, ‘the Great Grandfather’
or Maximón. 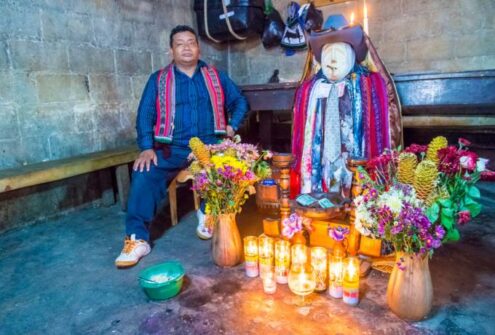 The saint is also worshipped in Santiago Atitlán, where he is represented with his face covered with a wooden mask. In Zunil, a town in the department of Quezaltenango, he is represented as a young man wearing sunglasses and other trendy items, showing that not even Saint Simón can escape overwhelming commercialisation. But the truth is that this popular saint attracts a large number of national and Central American tourists every year, since his cult crosses borders. It is very easy to communicate with him, they allege, because he has such earthly tastes. He likes tortillas and guaro (cane brandy).