Mexican folk art is present in all aspects of community life. During the civil (and Christian liturgical) year, no less than 120 traditional religious feasts are celebrated. The greatest of all is the celebration of the Virgin of Guadalupe.

Almost all the religious festivals that take place throughout the year provide a theme and a reason for the elaboration of an infinity of handicrafts: among the Huicholes, who live in central-western Mexico, they are called eyes of God (offerings to protect children up to the age of five, when it is believed that they have overcome the dangers of the first age), the muvieris (feathered arrows that the priest or marakame uses in the various rituals and with which he invokes the divinity), the jícaras with drawing in beadwork of the sacred animal: the deer, the boards on which they draw the symbols of their mythology with coloured wool threads glued on with Campeche wax. 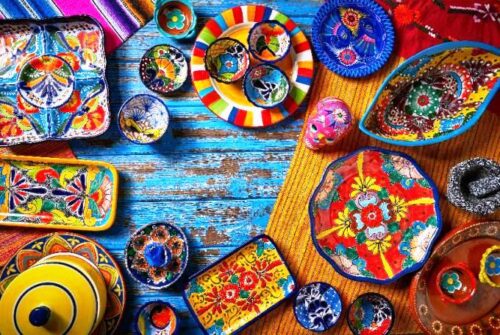 Among the Otomi of San Pablito Pahuatlán, Puebla, dolls are made out of amata or Chinese paper that symbolize the spirits of good and evil.
The representation of animals in dances has a profound magical-religious significance, such as those of the cycle of the Tiger, the Tecuanes, the Tlacololeros, the Deer, the Snake and others with a profound totemic character. Similarly, milagros, which are figurines of silver or alloys, shaped like an eye, leg, heart, etc. which represent the parts affected by some evil and which are placed in churches to ask for divine help, are the extraordinary examples of popular painting
and faith found in churches.

Christmas cycle
Among the popular expressions with which Christmas is celebrated – the inn, the Nativity, the pastorelas, the Epiphany and Candlemas – we find the plastic representation of scenes related to the birth of Christ. 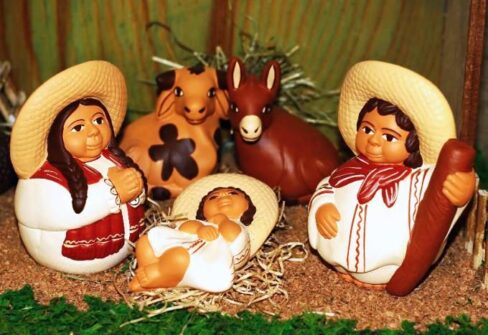 Mexican folk art offers us nativity scenes made with all kinds of materials: from stylized figures of wheat straw in Tzintzuntzan, Michoacán; to the polychrome wooden niches that recall ancient scenes in San Antonio Arrazola and San Martín Tilcajete, Oaxaca; beautiful natural wood carvings in Coatepec de Morelos, Michoacán; figures in coloured sheet metal in San Miguel de Allende, Guanajuato; trees of life with nativity scenes and baroque figures in polychrome clay of kings riding magenta elephants and camels, where even the mule and the ox are studded with flowers and stars in Metepec, State of Mexico.
Very delicate cribs in stretched glass, in Guadalajara, Jalisco, and others in cardboard and pasta in Mexico City.
The famous and popular miniature nativity scenes, modelled and polychromed by hand in Tlaquepaque, Jalisco.

Pastorelas
The origin of the pastorelas is rooted in the religious theatre of the Middle Ages, ingenious representations of a symbolic nature, written in verse in ‘quadriloquism’ and handed down from generation to generation. All follow the same lines and the same trappings that allude to the narration of the birth of Christ, with characters representing the shepherds Bato, Bras and Galia, the hermits in pointed hoods, the Holy Family in the portal of Bethlehem, the archangels Gabriel and Michael, the villains of the comedy: Luzbel and her court of demons, with the deadly sins Cunning, Lust and the other infernal hosts, who are finally defeated by the forces of good who go to adore the new-born
with songs of praise.

La Candelaria
On February 2, the Christmas cycle ends with the feast of Candelaria, which commemorates the presentation of the Child Jesus in the temple. It is on this date that the images that are ‘raised’ from the cradle in domestic cribs, in baskets, trays and chairs adorned with flowers, accompanied by grains of corn, beans, wheat and other cereals, are blessed, indicating that this ceremony is linked to the agricultural cycle. 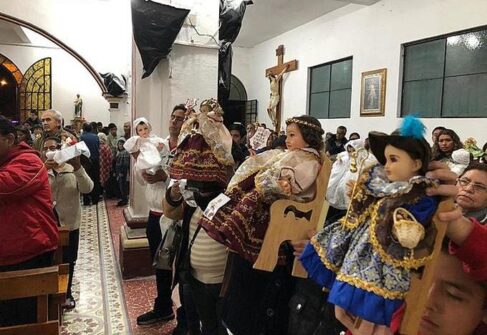 Fiesta de la Candelaria, in the parish of the Espinal, in the city of Orizaba. CC BY-SA 4.0 / Isaacvp

The godparents, who thus become compadres, will dress the child in a special costume made for this day, according to the different invocations they adopt: the Santo Niño de Atocha, the Niño Limosnero, the Niño de las Palomas … even the Niño footballer.

Carnival
The second great religious cycle – that of the Passion and Death of Jesus Christ – is preceded by the Carnival whose antecedents date back to ancient feasts such as the feast of the sacred ox of Apis and the goddess Isis in Egypt, the Greek bacchanalia, the wolves and the Roman Saturnalia, the harvest of mistletoe between song and dance in the early spring night in the Welsh forests. 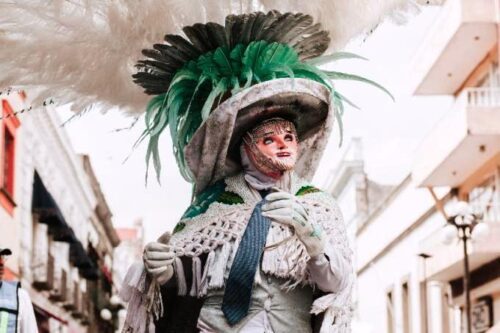 In Mexico, this festival has a completely different character, due to greater indigenous influence, where its ritual-propitiatory character is more accentuated. According to some researchers, this is due to the fact that this time of year corresponds to the Mesoamerican New Year, with its own nemonteni (five useless days), which regulate the ritual calendar.
Thus, several cities celebrate parades and dances: in Yuriria, Guanajuato, the dance is made up of hooded men dressed in black, with a skull painted on their backs; in Xochistlahuaca, Guerrero, men dress up as women, with beautiful huipiles and ride the machomula, which is a huge wooden horse; in Chiconcuac, Morelos, masked men with coats and bobbin hats dance the Taragotas; in Tlaxcala, the charros parade with feather headdresses and shawls embroidered with sequins; in Cantona, Tlaxcala, groups of catrines can be seen wearing coats and top hats, fine masks and open umbrellas; in Tepotzotlán, in the State of Mexico, the Chinelos, dressed in artisela dressing gowns, wire mesh masks, beards and a large feather headdress, take to the streets dancing the Brinco.

Lent
More than anywhere else, in San Miguel de Allende, Guanajuato and in the States of Colima, Morelos and Puebla, on the sixth Friday of Lent, the Friday of the Addolorata, altars covered with tablecloths and paper flags are erected, where images of the Virgin of Sorrows are placed with candelabra, stacks of large blown glass balls with coloured water, candles, chia seed plates, lentils, flowers and decorated candles. In Santa María Atzompa, Oaxaca, the altars include vases in the shape of a deer, the body of which is decorated with deep incisions through which chia or corn seeds are inserted – as if in a furrow – which, when sprouting, resemble the fleece of the ‘animal.’

Holy Week
On Holy Thursday and Good Friday, in various cities of the country, Judas dolls are sold, made of cardboard and cane, decorated with fireworks, and painted in bright colours, which, while symbolizing the traitor apostle, take on the appearance of the devil, of death and, above all, of the popular and political figures of the moment. 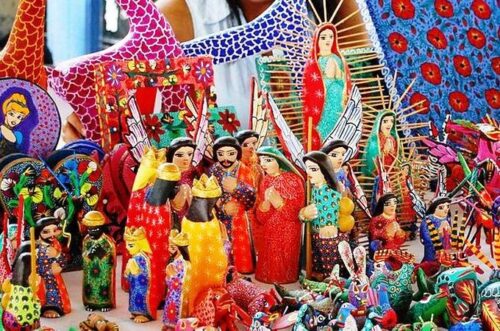 These very special dolls are usually burned in the square or in the streets of every town and village. On the occasion of Holy Week, in Metepec, in the State of Mexico, crucified Christs are modelled in polychrome clay; in San Antonio Arranzola and San Martín Tilcajete, in Oaxaca, wooden niches are created to represent Calvary and others in sheet metal with clay figures representing the different phases of the Passion of Christ.

The cult of the dead
One of the most deeply rooted celebrations in Mexico is that of All Saints which is celebrated on 1 and 2 November (the first is dedicated to deceased children, the second to adults). For Mexicans, death is nothing more than a phase of life itself, like the corn seed which, in order to continue its life cycle, must be buried to be reborn again. The Mexican people celebrate with great enthusiasm the day of re-encounter with those who preceded us on the journey towards eternity; they celebrate and erect altars in honour of the dead in the houses, with food and drink; the tombs are decorated with flowers or candles and their favourite dishes are offered to the dead, of which they will only take the ‘aroma’, while incense is burned. 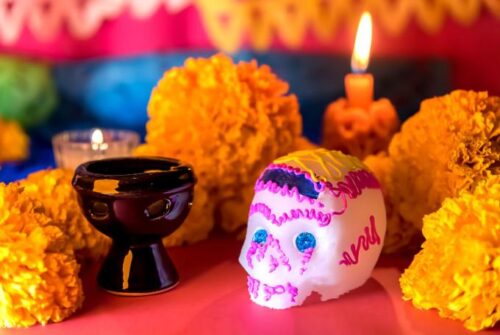 Traditional altars of the dead are decorated with cempasúchil flowers, and paper garlands of chopped Chinese paper. They are also decorated with scented candles or black paper flowers, as well as with crosses, vases, candlesticks, and censers. Of the latter, the best known are those hand-modelled and painted in tempera with bright colours, or those made of glazed black clay, such as those in the neighbourhood of La Luz, in the city of Puebla; or the polychrome and painted ones of Izúcar de Matamoros, Puebla.
The most popular items for the Day of the Dead holiday are decorated and painted sugar skulls, which bear a person’s name on their foreheads. Among these, those produced in Toluca, in the State of Mexico, in the central area of ​​Michoacán and in Mexico City stand out. In Celaya, Morelia and Mexico City, the skulls are made of cardboard and pasta, in the style of the Jews. Huge sugar skulls are also made in which bowls of colourful flowers are placed.

Our Lady of Guadalupe
The most important symbol of Mexican religiosity is the image of the Virgin of Guadalupe, in whose mestizo face scholars have tried to see that of the most revered female divinity in pre-Hispanic times: Tonantzin (‘Our True Mother’), and whose sanctuary is found in the same place where the patron saint of Mexico is venerated today. But Guadalupe’s cult goes beyond its religious significance, as she is an icon of nationality with a deep social sense of integration and identity. 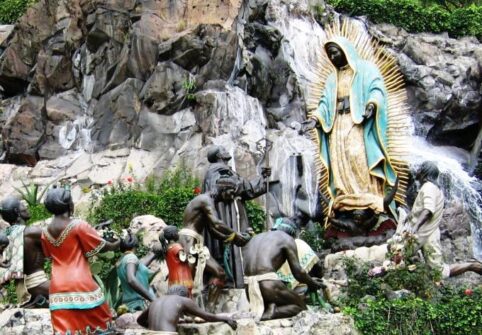 Every 12 December commemorates the apparition of the Guadalupana on the Tepeya hill. Near this date, pilgrimages to the Basilica of the Virgin multiply. Groups of pilgrims carry banners – some of them hand-painted – flags, banners with different legends and images of Guadalupe, richly decorated with natural flowers. The pilgrims are accompanied by marching bands and many people dressed in traditional costumes with ritual dances that they will perform in front of the Morenita. (Open Photo: 123rf.com)