Kidnappings, rapes and murders are part of daily life for many in the north of Nigeria. Boko Haram continues on its path of violence and destruction. Stories of suffering and pain. The Church stays by the side of the people.

There are some days that are carved into memory and never leave us. The memories keep coming back with their anguish and pain. It was on a Thursday, 18 January of 2018 when Keviana saw with her own eyes the murder of her three children by the Boko Haram Jihadists. She had first fled to Cameroon but had now returned and found emergency refuge on church property near the cathedral of Yola, in the north of Nigeria. The camp holds 172 women, 30 men and 500 children. The shelters are improvised using plastic sheets and sheets of corrugated iron. Keviana leans on a stone wall where she has her house. Tall and oval-faced, her gaze is serious and profound. Next to her, Sister Maria Vitalis Timtere tries to make eye contact but Keviana’s eyes are but a blank stare but she begins to speak: “We live in Kaya, a village in the district of Madagali. We were small farmers. My husband became ill and died young. I brought up our six children, three boys and three girls. The children were all going to school and I was proud of them”. 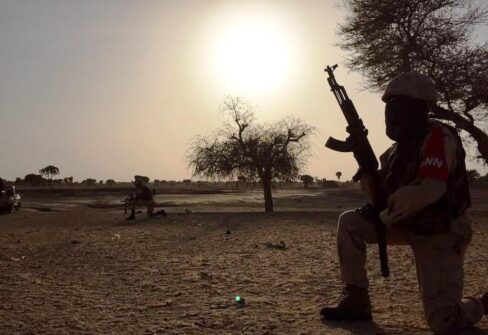 In a sad voice, she continued: “It was dark when they came, about nine in the evening. My smallest child, Innocent and I, were sleeping in the same room while the other two boys, Kenneth and David, slept in another. My two daughters Salomi and Sarah were not at home having gone to stay with friends and the youngest girl Rose had gone to Yola to do an English exam. All of a sudden we heard shooting, shouts and the sound of motorcycles and cars. From the window we saw some people coming into our courtyard carrying guns. I looked around and Innocent said: “Mamma, let’s block the door “. I told him to hide under the bed. After a few minutes, someone kicked in the door and they came inside the house. They shout at me saying they want money. I tell them I have nothing and I am a widow. Then they beat me, threatening to kill me if I do not give them money. One of them gathered up the few belongings I had. When they grabbed the mattress they saw my boy. Without a moment’s hesitation, they shot him at point-blank range”. Raising her finger to her forehead, Keviana says: “Right here”.
Others are trying to enter the room where Kenneth and David are hiding. They open the door, shouting. The two boys are paralysed with fear. The men drag them outside to join their mother. Keviana says: “ I saw them fire two shots. My two boys fell dead in a pool of blood”. The memory brings floods of tears to her eyes.

The forest of fear
For more than a decade, Boko Haram terrorists have been bringing death, destruction and fear to the people of northern Nigeria.
There have been at least thirty thousand deaths and almost 2.8 million people have been displaced.
Some say the jihadists have supernatural powers. One place where they hide is in the Sambisa forest. This is in a national park where tourists could once see monkeys, antelopes, ostriches and elephants. Today the forest is a refuge where terrorists have imprisoned thousands of people. Kaya, Keviana’s village, is close to the Sambisa forest. In 2014, the family had already gone to Yola fleeing from Boko Haram. Six months later, they returned. They wanted to live in their own home and cultivate their fields. The government said they could safely return. Keviana paid a high price for this mistake.

Listening helps
Many of the camp residents come from villages near the forest. Almost all of them have witnessed the death of family members, friends or neighbours, and even their own children, in some cases. “Seeing people who have to live with the fact that someone has killed their children before their very eyes breaks my heart “, says Sister Maria. Nevertheless, despite the pain, the Sister feels it is helpful for people to speak of these things. “The people tell me how they feel. They share their stories with me, some in a loud voice. I help them to express their pain and find some comfort”. Sr. Maria is a nurse. She came to the camp to work in public health and hygiene but she later realised people needed to tell their stories about what they went through. It was this that made Sr. Maria decide to spend time listening to them. 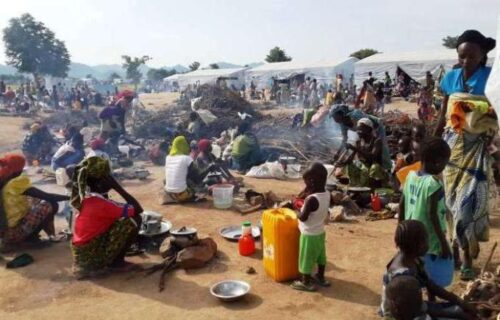 Nigerian refugees who crossed the border last week seek shelter in the Cameroonian town of Goura, after fleeing violence in Rann. (UNHCR/Xavier Bourgois).

Walking together among the huts, Sr. Maria points out Tabitha. She and her family fled from Ngoshe village. We approach her and soon she tells us what happened: “One evening in the village we were celebrating. The atmosphere was exciting and people came from other nearby villages. Then we heard the sound of cars and motorbikes. We thought they had come for the celebration but suddenly they began shooting. Everyone ran away. I saw several people falling and there was blood everywhere. So much blood!”
Tabitha managed to escape with her husband and her eight children, including week-old twins. As she was fleeing, she saw the jihadists shooting her brother. She saw many people she knew dying. All the inhabitants of the village fled to the mountains. After walking for three days, they crossed the border into Cameroon.
“During our escape, Andrawus, one of the twins, got sick and died a few days later “, Tabitha tells us. The family was received into a camp for refugees. “When we saw many people getting sick and dying in the camp, we decided to return here to Yola, in Nigeria “, she added. 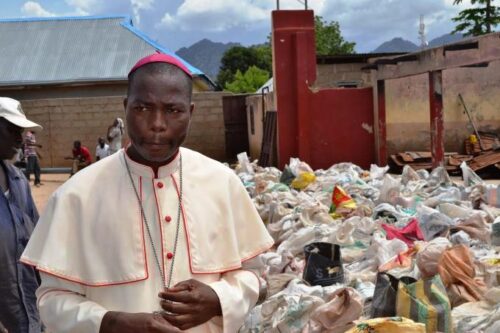 Since that time, I stayed in the town – together with eighty-five families who cannot return to their home villages. The Church helps them with food and some of them find occasional paid work, especially in the fields. Tabitha gazes at her children playing. She thinks of her home and the friends she will never see again. She wonders why they have had to suffer so much. Under a plastic tent, Augustin is cooking some beans he has just brought from his garden. His wife, Rebecca, has her baby daughter Guada in her arms. The child is only a few weeks old and is the pride of her parents. They have seven children. When Boko Haram attacked their village of Dar in 2014, their children were alone at home with a relative. Augustin was sick in hospital at Michika, where his wife Rebecca was visiting him.Rebecca recounts: “That was the time when Boko Haram was not burning down the villages. My father-in-law heard of the attack and how the jihadists were planning to take away the women and children to the Sambisa forest. “One night, he carefully approached the hut where the children were hiding and took them away. They walked for days on end.” Rebecca continues: “We heard of the attack on the village and we didn’t know if the children were still alive. Our anxiety went on but after some days we heard they were alive. Two weeks later, they arrived here in Yola”. 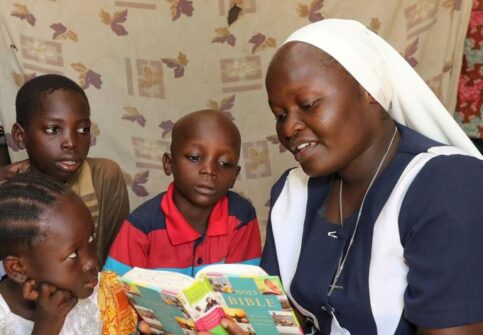 Women and girls are the ones who suffer most: even the very young are kidnapped and forced into marriage with the jihadists. In April 2014, the kidnapping of 276 girl students in Chibok scandalised the whole world. Some of them were released in October 2016. In 2018, Boko Haram kidnapped 110 girl students in the town of Dapchi, in Yobe state. They were released after secret negotiations with the government and a probable payment of a large sum of money. The most recent incident was in December when armed men burst into a secondary school for boys in Kankara, in Katsina state, in the north. They abducted a large number of students. The local media spoke of 600 boys kidnapped. They were almost all released a few days later.
Nobody knows exactly how many people have been kidnapped or killed in recent years since the Nigerian government prefers not to speak of kidnappings or murders. “There are no statistics”, explains Archbishop Ignatius Kaigama of Abuja.
“We find out about robberies and abductions only when we are informed by our people in the rural communities when they raise the alarm. Often, we know neither who they are nor where they are going.”

“We have no peace…”
Augustin, 42, worked as a public health worker before he had to flee. “I would really like to study but the Boko Haram business has spoiled all my plans. We cannot do what we want with our lives”,  Augustin quietly tells us. Of course, he would like to go back home. “But we cannot do that. Each time the terrorists come, the soldiers drive them back into the bush but then they come back again and attack our villages. 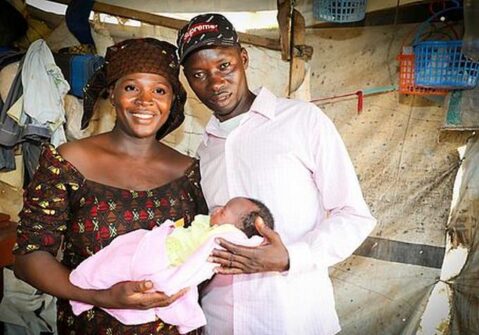 The government is not doing enough to fight them. We are living in fear; we have no peace. There is no peace in our hearts. That is why we stay here. I hope we can find a safe place here”.Meanwhile, the Church is building houses for the families in a village community near Yola. Each home also has a piece of land to cultivate.“We hope to get one of those houses. I would like to cultivate a piece of ground there”, Augustin says. “Our children can go to school and make a future for themselves”. The Church has opened a school under a large tent.