As the security continues to deteriorate in Eastern Congo, President Tshisekedi declared a “State of Siege” on the 6 May and considers to expand it indefinitely as long as the situation does not improve.

Eighteen years after the official end of the war in Eastern Congo, and the presence since 1999 of over 20,000 UN troops, representing an annual cost of one billion dollars for the international community, the region is far from stabilised. The security has deteriorated so much that President Felix Tshisekedi declared on the 6 May the “state of siege” in the Ituri and North Kivu provinces. The state of siege is much stricter than a state of emergency. Civilian authorities were replaced by military and policemen in both provinces. Governors, provincial MPs and civilian courts were indeed suspended. New mayors were appointed in the capitals of both provinces, Goma and Bunia. A curfew was imposed. House searches are now authorised at any time, day and night. The authorities are allowed to ban any publication or rally which may represent a threat to public order, to restrict the movements of people as they please and to bring suspects to military courts. 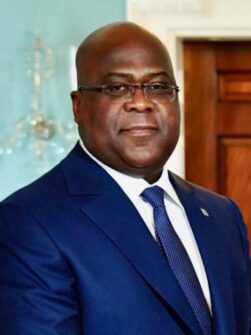 Félix Antoine Tshilombo Tshisekedi, President of the Democratic Republic of the Congo.

President Tshisekedi seems determined to end the current situation at any cost. It looks so desperate that he has even decided to call to rescue the Ugandan People Defence Force (UPDF) despite the dispute before the International Court Justice between both countries over the Congolese claims for compensations for the damages caused during the Ugandan occupation of Eastern Congo between 1998 and 2003.
On the 11 May, the commander in chief of the Ugandan armed forces, general David Muhoozi Rubakuba came to the city of Beni in North Kivu to set up a centre for the coordination of the operations of the UPDF and the Congolese FARDC forces against the Ugandan-born Allied Democratic Forces rebels (ADF) who have claimed allegiance to the Islamic state and are now operating under the name of Madinat Tawhid wa-l-Muwahidin (MTM, “The city of monotheism and monotheists”. In May 2019, a U.S. Africa Command spokesperson mentioned the existence of “meaningful ties” between IS and the ADF.
The ADF whose founders belong to the Muslim Indian-born tabliq sect are accused to have killed over 1,000 people in North Kivu since 2014, are now rated as the main terrorist threat in Eastern Congo. One of the challenges is that the group which was born from the merging of the Ugandan Muslim Freedom Fighters Movement, a Sudanese-backed militia, and of the National Army for The Liberation of Uganda (NALU), whose aim was to create the independent state of Rwenzururu in Western Uganda, has now strong Congolese connections. The proximity of the Bakonjo ethnic group of Uganda with the Nande and Talinga of the DRC has contributed to increase ADF’s influence in Congo. Nowadays, the ADF have more Congolese fighters than Ugandan ones. 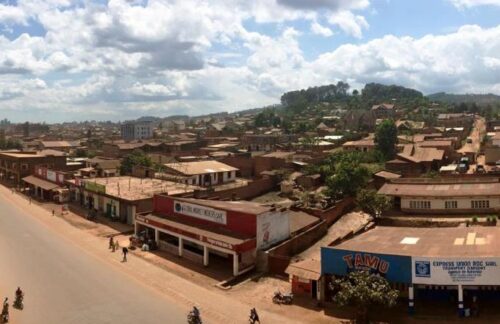 Yet, the ADF is not only an Islamist militant organisation. Racketeering, extorsion of property, blackmail or mere survival are other motivations for its fighters, says the New York-based Congo Research Group.
Unfortunately, the ADF whose main headquarters are in the Mount Ruwenzori area, are not the only threat. Further South, several Mai Mai groups from the Nande tribe are spread between the cities of Butembo and Lubero. Then, the area, North of Goma, between Rutshuru, Katale and Ishasha, is virtually a Hutuland, and is almost completely controlled by the Democratic Forces for the Liberation of Rwanda created by the Hutu genocidaires in exile. Yet, their expulsion is not an option since most of these fighters who are sons of genocidaires are married to Congolese women. Then the Virunga National Park, has become a sanctuary for dozens of Mai Mai groups (Lafontaine, Jackson, Nguru, Charles, Nyatura, Dario Syaghuswa, etc…).
Many of these were born as self-defence organisations against Mobutu’s army who looted the local populations. 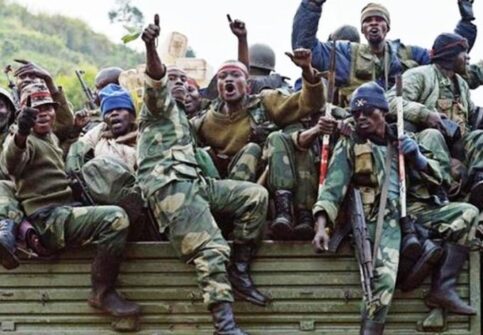 In this context, since the proclamation of the state of siege, the FARDC claimed that they have regained control of 12 villages in North Kivu, in the Walikale, Rutshuru and Masisi areas. On the 1 June, the Congolese army reported that 70 collaborators of the ADF were arrested during an operation called Sokola 1 while the Defence Ministry said a network of criminals who beheaded their victims in Ituri had been dismantled.
However, in early June, the Civil Society of North Kivu deplored that the first month of state of siege did not bear the expected results with still a very high toll of casualties amounting to 100 deaths in Ituri and 157 in North Kivu  “Few military operations have been carried out since the beginning of the state of siege and the security of civilians has deteriorated in the North Kivu and Ituri provinces”, said experts from  the Kivu Security Barometer, set up by Human Rights Watch
and Congo Research Group. 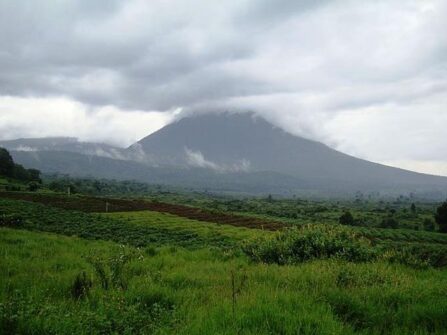 On the 25 May, 17 villages of the Ruwenzori area were abandoned by their inhabitants following attacks from the ADF rebels. Other attacks were reported on the 7 June against the displaced camps of Boga and Tchiabi, during which the hospital of Boga was destroyed by fire and 50 people died in the incident. The ADF are recruiting well beyond their stronghold as showed the arrest by the Congolese army South Kivu youths at Eringeti. To make things more complex, a Nandé MP, Jean-Paul Paluku Ngahagondi, explains that the nature of the conflict in North Kivu is not a “holy war” but rather a conflict for land between Nandés and Hutus. Accordingly, no message of Muslim predication has been heard in the region. Moderate Muslims are also paying a heavy toll; The imam of the Mavivi Mosque near Bunia, Cheikh Moussa Djamali who spoke against the jihadists and one of his colleagues were killed by the ADF in May. There are also clashes between ADF and Mai Mai militias around Mount Ruwenzori and between two different Mai Mai groups in the Lubero territory of North Kivu, the Nduma Defence of Congo led by a warlord called Guidon Cirimwami and the Front of Patriots for People/People’s Army. Eventually, in front of this situation, the Congolese authorities decided to extend the duration of the state of siege for 15 days on the 3 June. And President Tshisekedi said in a press conference in Goma on the 14 June that it would remain in vigour for an unlimited period of time, as a necessary measure to eradicate the violence of the 120-armed groups which are active in Eastern Congo. 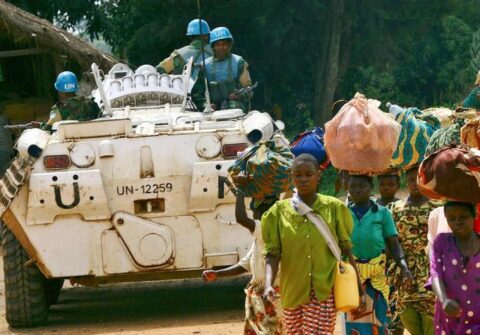 Yet, people in Kivu express doubts about the possibility of a victory. Despite considerable funding, the UN, the Congolese army have shown unable so far to stop violence in the region. One of the explanations is that General Muhindi Akili Mundos, now under US sanctions who was appointed by former President Joseph Kabila, as head of operations in 2014 and 2015 has been accused of cooperating with the rebels and making business with them instead of fighting them.
According to the manager of a coffee estate of North Kivu, it is an open secret that the DFLR and the Congolese army are working hand in hand. The officers of the Congolese police and of the FARDC are often seen in the company of Hutu rebels’ officers. Sometimes, the UN Mission for the Stabilisation of Congo (MONUSCO) blue helmets or the FARDC organise military operations against the rebels. But curiously, the rebels and almost everyone in the area are warned that the operation will take place, three days in advance. At the end of the day, the DFLR or other rebel militias leave their camps before the operation and only a few elders or injured fighters remain there and get arrested. Beside unconfirmed allegations of corruption concerning some Congolese army officers or UN military, a current explanation of such attitude is that warning the rebels means avoiding major clashes. “Neither the UN or the Congolese troops are really keen to risk their lives” says our source. 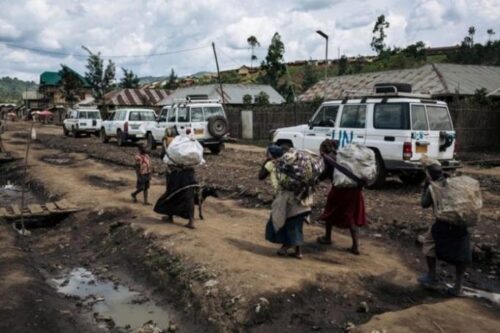 Other provinces of Eastern Congo are facing similar problems. President Tshisekedi has been urged by the civil society of the Upper and Lower Uélé provinces, close to the border of the Central African Republic, to impose also the “state of siege” to allow army operations against the Mbororo cattle herders from Chad and the Central African Republic who are equipped with AK47.
In South Kivu, the situation is also volatile. The Congolese army detained in June a former military officer, now leader of an armed group who claims to defend the rights of the Banyamulenge shepherds in the Itombwe Highlands against militias from other ethnic groups. But tensions remain. Simultaneously, a large exodus is taking place from the President’s Kasai region towards the much richer Katanga area. The migration which is triggered by hunger could spark ethnic violence in the destination area. The Katanguese who perpetrated pogroms in the 1990s against the Kasaians fear that they could be “ invaded” by their neighbours. In addition, since Kabila is no longer in office, Katanguese are frustrated not to hold anymore the key jobs in the government. Difficult times are ahead.