The year 2016 was the year of anti-immigration walls, the militarisation of frontiers and a record year for deaths in the Mediterranean, sad phenomena closely affecting Europe.
The famous ‘Balkan route’ bringing migrants from the Middle East to Europe was broken up by a series of barriers to stem the flow of migrants: first among these is the Evros wall between Greece and Turkey, followed in 2014 by that between Bulgaria and the nation led by Turkish Prime Minister Erdogan. 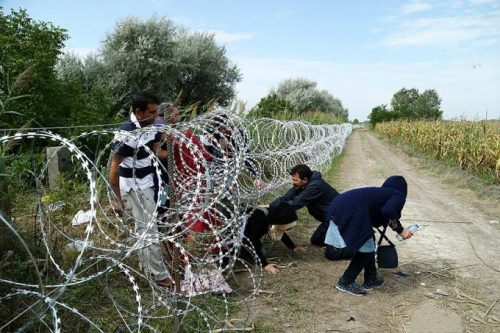 While 2015 ended with the decision of the German chancellor, Angela Merkel, to suspend the Dublin regulations (the European legislation that obliges migrants to seek protection in the first country of the EU that they enter) and to receive on German territory more than 600,000 Syrian war refugees, 2016 represents a diametrically opposed position. In fact, in the  early months of the year, the Balkan route was blocked by the tightening of border controls by countries like Hungary and Fyrom (Former Republic of Macedonia), and by the construction of wars and fences such as the one 175 kilometres long between Hungary and Serbia, built by the nationalist government of Viktor Orban. In a matter of a few months, populist and xenophobic campaigns, instigated by extreme right parties, poured petrol on the fires of discontent in Europe, a continent wounded by the crisis, making immigrants the scapegoat of the EU that was becoming increasingly disjointed and weak. 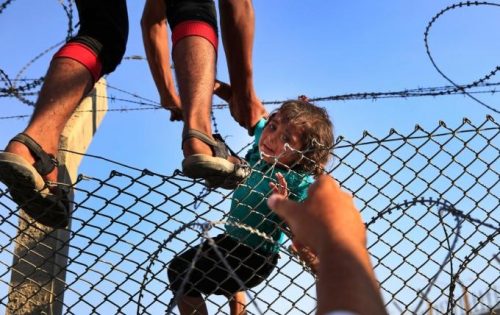 Added to the concrete and barbed wire barriers is the bureaucratic sort blocking millions of fleeing men and women in an infernal limbo; the agreement sealed by Brussels with Ankara on 18 March 2016 has, in fact, definitively closed the Balkan route linking Turkey with north-west Europe, a route that passed through Greece, Fyrom, Serbia, Hungary, Austria and the other Balkan states. In return for six billion Euro in aid, Ankara agreed with the EU not to allow refugees to leave the two coasts and to accept that migrants reaching Greece after 20 March should be deported to Turkish territory.In a short time, the political EU-Turkey wall produced its effects in abundance, transforming the hotspots, former registration centres, into four inter-connected walls.In effect open air prisons where migrants are forced to await enforced repatriation. 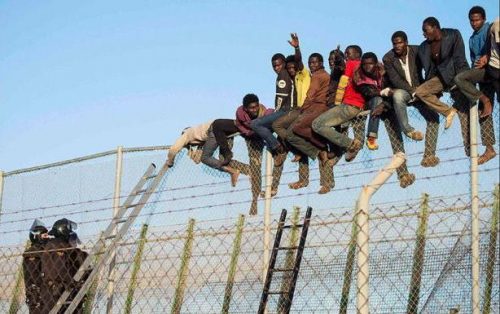 Nevertheless, the phenomenon of raising anti-migration barriers is not new in Europe: there is the well-known case of the barbed wire barrier built by Spain in 1990 to halt illegal migration and the trade in drugs from Morocco to the Spanish enclaves of Ceuta and Melilla. Together with the raising of walls, there has also been the business of investments for the control of frontiers. “Resettlement, relocation and the protection of borders go together. I am confident we will make good progress in 2016”, Juncker said as he opened the Dutch semestral presidency of the EU and launched the idea of Europe-wide border guards. This idea became fact in September 2016 with the creation of a European Border Guard, substantially to reinforce Frontex, the European agency for the control of external borders. The new force, even though it has no guards of its own, can count upon 1,500 agents chosen from the national border guards, ready to intervene in case of an emergency in any of the European countries. The expenditure of European funds, neither for the protection of human life nor to aid people in difficulty, but for the militarisation of borders in the past decade, has been enormous. According to the Border Wars report (Mark Akkerman, ‘Border Wars: the Arms Dealers Profiting from Europe’s Refugee Tragedy’, Transnational Institute, December 2016) edited by student Mark Akkerman, the bill for Frontex between 2005 and 2016 increased by 3,688%, moving from 6.3 million to 238.7 million Euro per annum. Notably, it has almost trebled from 97 million in 2014 to reach 281 million Euro in 2017. The first beneficiaries of the policy of reinforcing frontiers are the militaristic, technological and security firms. 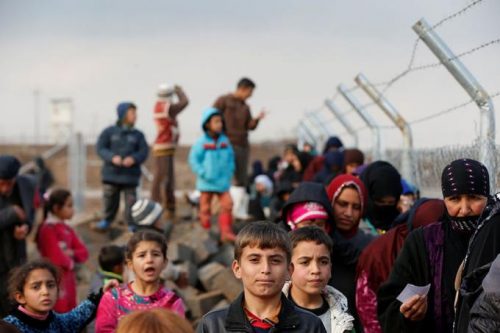 As revealed in ‘Border Wars’, lucrative contracts were made between the EU and arms-producing companies such as Airbus, Finmeccanica, Thales and Safran, together with the technological giant Indra. These companies not only benefited from the militarisation of the borders of Europe but also created political pressure in favour of this approach by lobbying. Other beneficiaries of European funds have been Israeli companies (the only ones from outside Europe, due to an EU-Israel 1996 agreement), in appreciation for Israel’s contribution in reinforcing the borders of Bulgaria and Hungary, promoting its competence as shown by its control of the West Bank wall and that of the border with Gaza.
The Israel Company BTec Electronic Security Systems was chosen by Frontex to take part in a workshop on Platforms and sensors for guarding borders. The letter of presentation boasted of the excellent ‘technologies, solutions and products installed on the Israeli-Palestinian border’.Lastly, Akkerman revealed that many of the companies doing business with Frontex are the same ones selling arms to the Middle Eastern and African countries from where migrants are fleeing, following the mirage of the European dream. The unprecedented economic expenditure for the control and militarisation of borders has also coincided with the dramatic record of deaths in the Mediterranean where, according to figures obtained by IOM (International Organization for Migration) 5,143 persons were drowned in 2016. It is estimated that 3,718 people lost their lives crossing the Mediterranean in 2017. 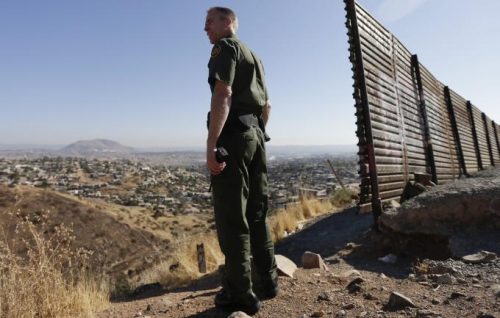 In the World: the case of Mexico

To add to the sorry list of extra-European anti-migration walls we must add that between the US and Mexico. The latter returned to the attention of international news when President Trump brought up the issue of planning the wall, making it part of his political manifesto. Doubtless the most frequented border in the world is that between Mexico and the US, with around 350 million legal crossings every year, and it is one of the most guarded.
According to some estimates, from 2005 to the present day, the US has spent 132 billion dollars to reinforce its security, increasing expenditure each year (in 2015, almost 3.8 billion dollars were spent on it). However, the wall is so long that is practically impossible to guard it properly: it is 3,200 kilometres long. In real terms, there are at present, at the more sensitive points of the border, structures that act as barriers, together about 1,000 kilometres long. Of these, about 560 kilometres are made up of a simple fence five metres high, while along a little less than 500 kilometres, there is a very low barrier to prevent vehicles passing. A further 1,500 kilometres is taken up by natural obstacles such as mountains and water courses. Despite this, the American government spends billions of additional dollars annually on such things as ‘sensors, night-vision cameras, radar, helicopters and drones and legal expenses to prosecute those caught crossing the border illegally’, as summed up by Arizona Republic. The main company that sees to the control of the border is Border Patrol, a federal agency with over 20,000 employees —making it one of the biggest in the country — occasionally backed up by local forces.

Despite this deployment of forces, hundreds of thousands of people try each year to cross the border illegally, mostly to improve their living standards. Every year, many Mexicans and Central Americans are captured by the armed forces guarding the border. In 2016 they numbered almost 416,000: in recent years, the number has gone down for different reasons, one of which is the improvement of the economy in Mexico, the increase in security measures by American governments and the creating of new ways to enter American territory illegally (such as obtaining a legal permit, perhaps for tourism, and staying in the US after its expiry).At present there are eleven million people living in the US who contribute to its economy.
Trump’s intention to deport them all or to suddenly interrupt the flow of immigrants would create considerable problems. If it were to be built, Trump’s wall — costing tens of billions of dollars and considered strategically useless — would not resolve these problems but would probably cause more suffering and harm to the American economy:
in fact it has been calculated that if the government were to implement a programme of deportation en masse and halted new arrivals, as Trump has promised, the American GNP would diminish by 1.5%.
(CB/DF)