The ancient pre-Hispanic city of Uxmal and its three surrounding sites: Kabhá, Labná and Sayil admirably demonstrate the social and economic structure of late Maya society.

One of the great mysteries of humanity is the sudden disappearance of the extraordinary Mayan civilization at the end of the eleventh century which would contribute so much to the knowledge of sciences and arts worldwide.The city of Uxmal is located in the southwest of the state of Yucatán, precisely in the centre of the Puuc region. The word ‘puuc’ is derived from the Maya term for ‘hill’. Since the Yucatán is relatively flat, this term was extended to encompass the large karstic range of hills in the southern portion of the state, hence, the terms Puuc region or Puuc hills. Uxmal was founded around 700 AD and in the Late Classic period, around 850-920 AD, when most of the city’s main structures were built, its  population reached about 25,000 people making Uxmal one of the largest cities in the Yucatán. Its buildings date between the years 700 and 1000, and are oriented according to astronomical phenomena, such as the ascent and descent of Venus. 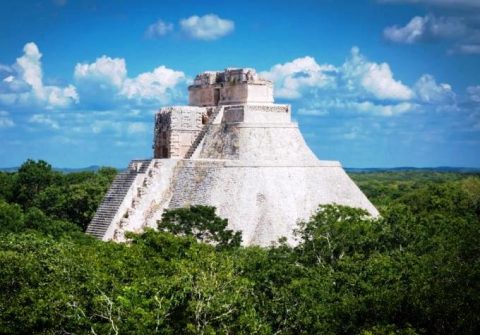 In this region an architectural style emerged – and an art of its own – known as Puuc, which is distinguished by a rich ornamentation with symbolic motifs, facings of thin squares of limestone veneer over a cement-and-rubble core; boot-shaped vault stones; decorated cornices around columns in doorways; engaged or half-columns repeated in long rows; and lavish use of stone mosaics in upper facades, emphasizing sky-serpent faces with long, hook-shaped noses, as well as frets and lattice-like designs of crisscrossed elements and on the corners representations of Chaac, god of rain. Upon entering the area, one sees the wonderful Pyramid of the Foreteller which dominates the ceremonial centre. It is 35 metres high with its elliptical base measuring approximately 85 by 50 metres; monumental stairs are located on the two sides of the structure. Several metres separate it from the so-called Quadrangle of the Nuns, as the Spaniards called it thinking it had been inhabited by Mayan priestesses.
This architectural complex is made up of four structures on different platforms arranged around a large trapezoidal patio of 65 by 45 meters. The building located to the north seems to be the most important since it is on a higher platform compared to the others.The facades present a rich combination of decorative motifs such as lattice, columns, huts, the masks of the rain god, owls, symbols of the planet Venus, geometric elements, and human figures, either standing or sitting. 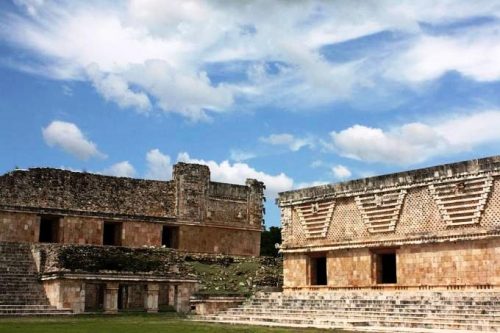 The decoration of this complex is splendid, which is why it is recognized as an outstanding example of the abstract and geometric art of the Maya. Heading south, one passes through the middle of the Ball Court, which is rather small, 43 by 10 meters, if compared to that in Chichén Itzá. The House of Tortoises is another impressive structure so called from its fresco of sculptured turtles. It is located on the same terrace as the Governor’s Palace, which is probably the finest example of the Puuc style. The palace, a multi-roomed, rectangular building (c. 100 m long and 12 m wide) with a symmetrical layout, sits on a large artificial platform. It consists of  24  rooms and three sections divided by two corridors, whose vaults are the highest in the region. The decoration of the facade of the building has glyphs of Venus, placed on the cheeks of the masks of Chac, god of rain and fertility and there are also eight two-headed snakes above the main entrance. Along the facade, there are thatched huts, garlands, columns, thrones, feather headdresses, numerals with bars and dots appearing in two Chac masks in the north corners of the palace. Basically it is a masterpiece for both its architecture and decoration.

Universal values
Uxmal is considered as one of the most important archaeological sites in Yucatan and one of the most important pre-Columbian monumental complexes in the Americas. This pre-Hispanic city was declared a World Heritage Site by UNESCO in 1996, following four other monumental and representative sites of the Mayan culture which were previously inscribed on the World Heritage List: Chichen Itza and Palenque (Mexico), Tikal (Guatemala) and Copán (Honduras).
Each site with its own peculiarities, has been fundamental in deepening the knowledge of the Mayan civilization. 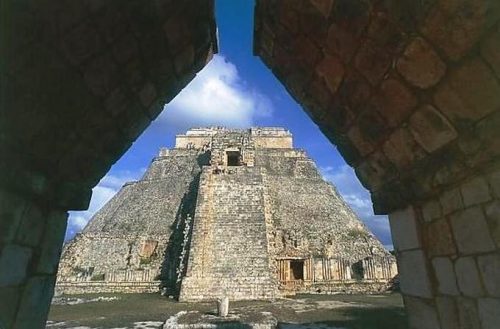 The ruins of Uxmal’s ceremonial pyramids represent the peak of  Mayan art and architecture in its last stage, in terms of design, distribution and ornamentation, Elements of art from Mexico with those originating in Yucatan were combined together in the extraordinary quality of its buildings and in its decorative art. Uxmal and the other Mayan archaeological sites highlight the exceptional universal values of the Mayan culture.