Fierce superstitions marginalize those who have inherited the lack of melanin and sometimes endanger their lives. Even if something is changing. Like in Ukerewe, a small island on Lake Victoria.

The ‘Tribe of Ghosts’. This is the name given to the albino people in Tanzania, the largest ‘black-white’ community in the world and one of the most persecuted. Often, it has become a valuable commodity for superstitious rich people, Africans and non-Africans, who believe that having bones or organs of these people brings money and luck. Or that the ashes of their bodies, mutilated and burned, can heal diseases. Or even those who think of curing AIDS with the rape of albino women. 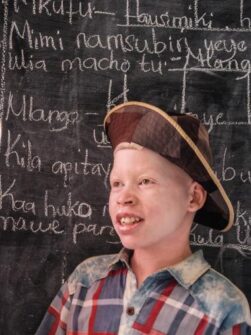 There is no end to the horrors to which these human ghosts are subjected. But something is slowly changing. In 2013 a UN declaration condemned all these cruelties while a few years earlier, in 2010, an albino,
Salun Khalfani Barwani, was elected to the Tanzanian parliament and certainly influenced the choices made by President John Magufuli (who passed away in 2021), with the creation of local special teams to combat violence against the white people.
And so regional protection associations began to spring up supported by international ones which bring about a real improvement in the situation. Now, especially in the cities, you can see them, these whites of Africa with dreamy eyes, going out, working, mingling in the chaos of the great mother. With their dark glasses and exotic wide-brimmed hats.
Because it is not enough to have one’s fellow men as enemies, in these latitudes, there is also the sun which here is no joke even for those
who have melanin. 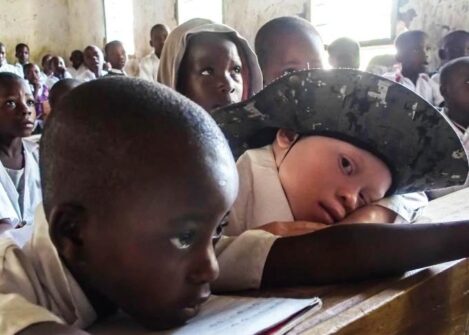 And so, Alfred Kapore, responsible for the Mwanza region for albinos (he, too, is an albino), explains that with this hereditary genetic disease – the lack of melanin leaves the skin unprotected: in Tanzania, one new-born baby out of 1400 is affected – it can become difficult to work, to move, especially in small villages, where there is poverty and often what is needed to protect oneself from the natural enemy is lacking. Creams, glasses and hats. Where even these basics are lacking, those who are ghosts must behave like one, isolating themselves from real life.
And thus, wicked beliefs are fed. Ghosts are said to be demons and expendable beings.

The island of Ukerewe
However, there is a place, an island, which for a long time has offered refuge to these persecuted people. Like a promised land, the island of Ukerewe, in the middle of the immense Lake Victoria, still welcomes Kapore and his family. And many like him.
We embark, with a nostalgic look at the elegant and dying Vittoria ship, heading for Ukerewe,Eden of the albinos. 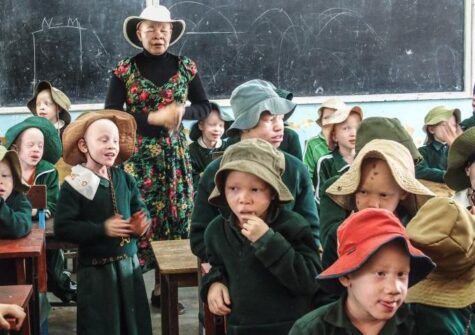 The island is large and hosts, as Ramadan Alfani, president of the local black-whites tells us, 82 people with albinism. And it offers relative tranquillity in the shade of trees that all have a person who takes care of them, on land that is not abandoned and in front of waters full of fish. The small milk-coloured children show us the pride of being able to go to school, where they are welcomed with enthusiasm by their classmates, and then, from their poor houses, they fetch creams, glasses, and hats (gifts from Canadian NGOs). 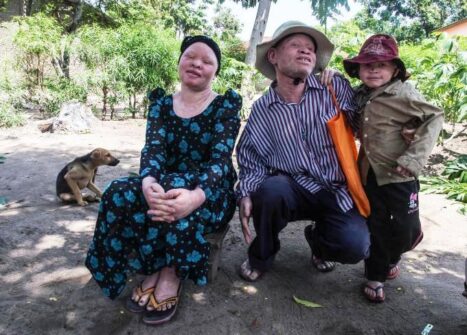 Here families have managed to stick together with humble resources linked to fields and fishing and, thanks to oversight by the community, dangers are fewer. But even here we must take good care of the children as they come and go to school and when darkness falls. Fear is in the DNA of African albinos, inside and outside them. Day and night. An island elder explains why they are afraid. People cut off arms and legs, or the genitals, and leave the corpse behind. A mother tells how her son is laughed at and excluded. There is even the desecration of burials and the fear of kidnappings. But in Ukerewe, they tell us, acceptance and integration are better observed and for this reason, many live there and form families. And there is also a legal office and a hospital, both dedicated to the problems of ‘Zeruzeru’ (ghosts).
Of course, Alfred Kapore says that “if there was a cream that made them black, he would be delighted”.