Syria is the Arab country that has best preserved the physical evidence of its pre-Islamic past: from the proto-Semitic cultures of the Levant (such as the Phoenicians to Mesopotamians and Assyrians) to Greek and Roman (the city of Palmyra, as well as Damascus and Aleppo, exemplifying this multifaceted aspect of the Syrian heritage).

In fact, Syria has also preserved the finest examples of western attempts to reconquer the Islamic Middle East such as the Crusader fortresses, and Craq de Chevaliers in particular. Regardless of their faith, the Syrian people have generally not lost awareness of their past. The war in Syria has left some 500,000 deaths according to some estimates.
Aleppo possesses many architectural treasures from the various Muslim periods, from the Umayyad’s to the Ottomans. Palmyra, one of the cities built in the Hellenistic period and linked to the Decapolis, a route connecting present day Syria to present day Jordan and northern Saudi Arabia, passing through Baalbek, Jerash, Pella, and Petra, is marked by some of the grandest temples in the Middle East. These sites testifying to Syria’s rich heritage have also come to symbolize the iconoclastic destruction by ISIS. 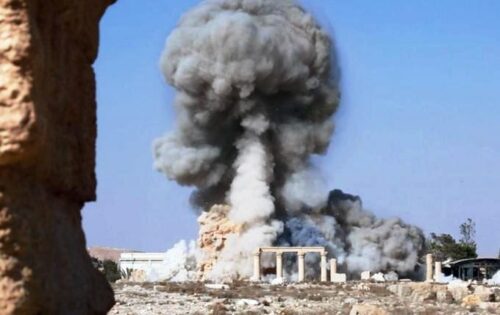 The Temple of Baal Shamin at Palmyra was attacked by ISIS fighters using improvised explosives.

While the media highlighted the damage in Palmyra, other sites of no lesser significance also incurred the ideologically fueled wrath of ISIS. Mari, a site of primary importance for the understanding of ancient Assyria, was also attacked. Mari remains one of the most important sites of the Bronze Age in the Middle East. Mari, located in present day Tel Hariri in the Deir ez-Zor area (one of the most affected by the war), rose around the same time as Uruk, at the end of the fourth millennium BC. The city was located at the confluence of important river trade routes along the Euphrates river, linking Sumer with Syria. Mari thrived for centuries and reached its peak in 1761, when King Hammurabi destroyed it. Mari has become very famous for its palace, which yielded a valuable collection of state correspondence in Akkadian, which helped historians understand invaluable archaeological information about geopolitics in the early 2nd millennium BC. Mari, and its palace especially, suffered considerable ‘illegal excavation’, i.e., looting, in the period from 2011 to 2018. ISIS destroyed thousands of manuscripts with the justification that many historical documents or artefacts represent pre-Islamic culture believed to be idolatrous. 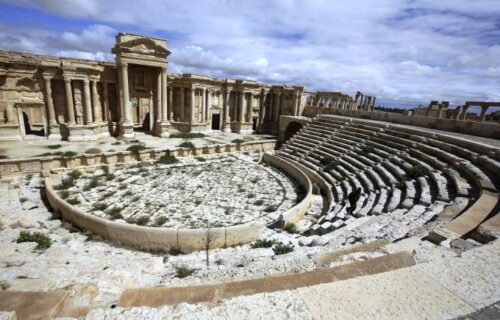 Archaeologists and curators have worked to protect, preserve and rebuild these places. But, as with everything else, funds are needed to support restoration projects. In late 2019, the same Russian government which intervened at Damascus’s behest, signed a memorandum to restore Palmyra, which was recaptured by government forces in 2016. ISIS executed Palmyra’s curator Khaled Assas who refused to give up some of the most precious artefacts from the site.
Now, under the direction of Mikhail Petrovsky, from St. Petersburg’s Hermitage, Russia will help fund and organize the restoration of Palmyra and of Damascus. Ideally, the Russians will also welcome Syrian experts in order to ensure the sustainability of the restoration and preservation of Palmyra for more centuries. 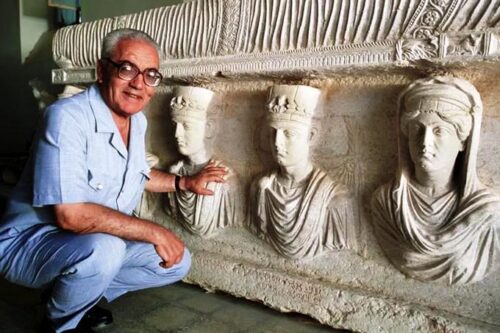 Khaled al-Asaad, the Director of Antiquities and Museum in Palmyra, in front of a rare sarcophagus.

The wars in Syria and Iraq have shown that cultural heritage can serve as a target for destruction, looting and illicit trafficking of cultural assets. Cultural heritage is a legacy of the identity, or identities, of the peoples to which the artefacts are linked. The cultural heritage of the Near East is not new to conflicts or theft of artefacts – one need only visit a few famous museums in Europe or North America to realize that. But the asymmetric warfare that has marked the war in Syria has made it more possible and ‘acceptable’ for looting to occur.
No single solution can be adopted to protect the heritage of Syria and Iraq, but toughening laws on smuggling and being more intelligent about intervening in wars that quickly go out of control, helps. The sociopolitical and cultural tensions that emerged during the Syrian war remain; they have not been resolved. But, even if the more extreme elements have been defeated, it’s incumbent on those professing to be civilized now (the West for example) not to aggravate Middle Eastern scenarios for their own strategic games. That might be the best way of all to preserve the legacy of the ancient Near East.