A Benedictine theologian, activist, missionary and intellectual, Sr. Mary John Mananzan speaks of the Philippines of the past and of today. From the former dictator Ferdinando Marcos to the President now in power, Rodrigo Duterte.  The Church has always offered resistance and will continue to do so, taking the side of the poor.

“The Church cannot remain silent before injustice”. Especially when this is in the form of state violence that seriously threatens the lives of the poorest. This is the view of a well-known member of the frontier Philippine Church: Sister Mary John Mananzan, a Benedictine, theologian, activist and Superior of the Missionary Benedictine Sisters of Manila. 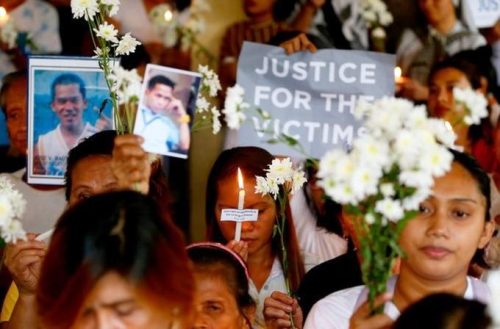 To the general indifference of the world in general, the Filipino President Rodrigo Duterte continues with his abuse of power in his own country, ordering summary executions of those he himself considers ‘criminals’. “It is up to us to be courageous, resolute and to resist this tyranny”, says Sr. Mananzan, who heads the Movement Against Tyranny, a global Philippine alliance composed of leading figures in the political, cultural and ecclesiastical world against the arbitrary acts of the President. Duterte is violent and “the ongoing oppression seriously affects the poor and women – Sr. Mary explains – this President is a nightmare for us. He is so rude and misogynous that he thinks the only solution to adopt is that of killing people”. 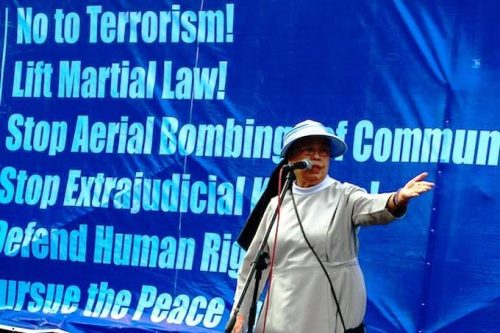 Sr. Mary is no newcomer to political resistance; for many years she fought against the regime of Ferdinando Marcos, a dictator and the tenth President of the Philippines from 1973 to 1986. Martial law was imposed for the first time in the Philippines in 1972: when the country was in the iron grip of the ruling former liberal who soon dissolved parliament and abolished political parties and had himself invested with full power in 1973, only to flee to Hawaii ten years later. “Even under the martial law of President Marcos – Sr. Mananzan recalls – killings were not taking place daily like today”. She believes Duterte is even worse. This is shown by the words of the President himself: “Imprisonment alone is not enough to deter criminals from committing more crimes: we ought to put them in a boat, perhaps in groups of five and leave them in the middle of the Pacific Ocean to become food for the fish”. 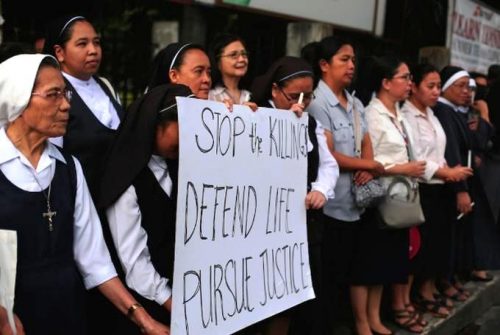 Asked whether the Church suffers persecution by Duterte, Sr. Mary John says: “ The Church is the keystone of social assistance and education in the Philippines. Without the Church, everything would collapse”. The Church in the Philippines is especially at the service of the poor. Take the example of Father Mark Ventura, 37, known for his work against exploitation by the mining companies, who was murdered on 29 April, 2018, after saying Mass on the island of Luzon, in the far north of the country. “Religious Sisters and lay people are the backbone of service to this frontier Church”, Sr. Mary John explains.
“We women of the Church are everywhere, even if we make no decisions. We live with the poor. 80% of those who are active in the Church are women, and the Sisters are considered the best educated group of women in the Philippines. If you want to know why the Church is tolerated in my country, my answer is that it is because of the women”, says the missionary Sister who is also the head of Saint Scholastica College, “not even Duterte dares to attack the Sisters: he never says a word against us religious. Besides, the President attended a school run by the Sisters. Many politicians of today attended our schools and they cannot make trouble for us”. 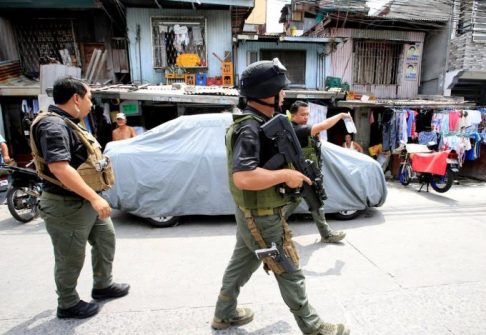 Sister Mary John is happy to speak also about herself: the first woman to obtain a degree at the Gregorian University in Rome in 1973, she studied theology, she says, proud of her work as a feminist: to clarify she adds, “I was a political activist before becoming a feminist. While at university, I was not conscious of being a feminist, it came instinctively”. In reference to her present activism she comments: “We are not radical but social feminists”.
Always in the front line of the battle on behalf of the helpless, this Sister fights for the protection of creation, and during the recent Amazonian Synod, she took part in some meetings in which she affirmed that, “mining activities carry off the resources of the indigenous peoples and the army, rather than defend them, assists the multinationals”. Hers is a truly ‘spiritual militancy’. 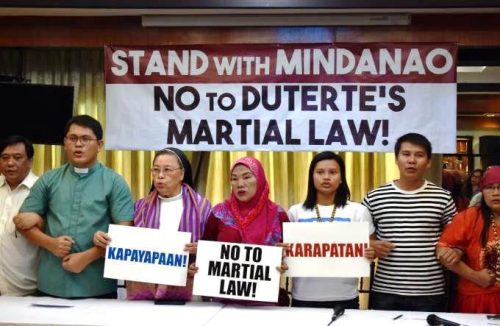 Speaking of the Philippines, we ask Sister who protects the President.  Sr. Mary believes he is backed by the majority of the Filipino people. It is his populist approach to the problems of crime, drugs and people trafficking that makes him so popular among the people. Apart from the human rights associations, some courageous journalists and activists in the Catholic Church, there is really no political opposition capable of consolidating itself. “Fortunately we had Cardinal Luis Antonio Tagle – the Sister says, smiling – an intelligent man and very outspoken. Now he moves to Rome to be the prefect of the Congregation for the Evangelisation of Peoples.”
The Archbishop of Manila has represented a viewpoint and lifestyle that is diametrically opposed to that of the tyrant. “Do not be domineering – Cardinal Tagle said some time ago in a homily – Do not use your power to impose yourselves. Do not use it to accuse people falsely. Just because you are in a position of power does not mean you have the right to destroy or humiliate others. Anyone who does so is fearful and insecure as an individual”.