On the edge of the on the border between Niger and Burkina Faso, the Fatebenefratelli friars have been providing medical services to the people of Atakora plateau. Brother Fiorenzo Priuli, director of the St. Jean de Dieu Hospital spoke to us about his experience as a both missionary and an orthopedic surgeon.

The city of Tanguieta, in northern Benin’s arid Atakora highlands – the most mountainous region of the country – has a population of 60,000. In the 1970’s, the Order of the Fatebenefratelli (Brothers Hospitallers of Saint John of God), opened the St. Jean de Dieu hospital. Brother Fiorenzo Priuli, the facility’s current director, recalls: “It took hard work and much patience to earn the people’s trust. Most locals sought the advice of sorcerer-healers, by virtue of their religious convictions. But, most of all, people were wary of the novelty that white people had introduced.” But, there was a turning point between 1979 and 1980, when a terrible measles epidemic killed thousands of children within a few months. “It was then that people noticed that those who came to the hospital were cured, and then they started to come regularly”. 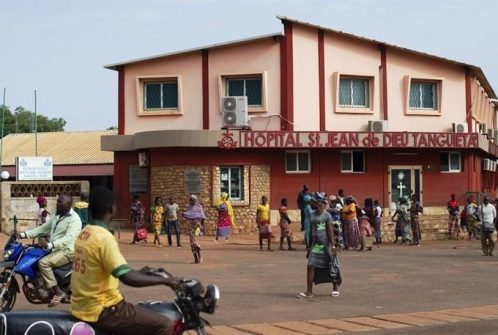 Brother Fiorenzo, a surgeon, has been a missionary in Africa for the past 50 years, earning the esteem at both institutional and popular levels within and beyond the borders of Benin and Togo. At the young age of 23, Brother Fiorenzo obtained a professional nursing diploma and immediately left for Afagnan, a remote village in Togo, where the Fatebenefratelli founded a hospital in 1964.
From the beginning, Fra Fiorenzo proved to be tireless, always full of dedication while caring for malnourished children, or working in the lab, radiology and the operating room.
Such was the level of the dedication to his mission that he contracted a serious form of tuberculosis, which forced to return to home to Italy for treatment. But even such a serious illness was unable to break Brother Fiorenzo’s mission. During his convalescence at the Hospital of Sant’Orsola in Brescia, he took up medical studies at university in order to become even more useful to his patients in Africa, whom he has always kept in his heart. 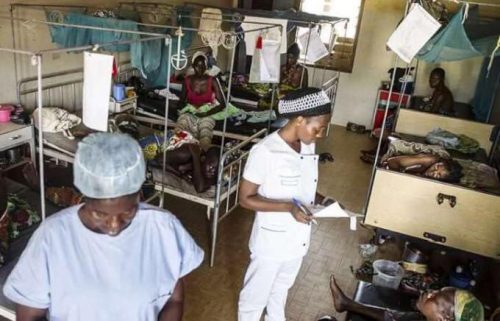 After the hospital in Tanguiéta opened in 1970, Brother Fiorenzo split his service between the Togolese and the Beninese hospitals. He graduated in Medicine and Surgery from the University of Milan in 1979, specializing in orthopedics, and he became one of the world’s first to perform surgery on patients suffering from polio related leg paralysis, allowing them to walk again. Such is his talent as an orthopedic surgeon that Brother Fiorenzo has earned the nickname: ‘The man with golden hands’, treating thousands of children suffering from polio, allowing them to walk and smile again. Nevertheless, Brother Fiorenzo also earned a strong scientific reputation. After studying traditional African medicine, becoming an expert, he discovered that a species of shrub native to West Africa, known as kinkéliba, can be extraordinarily effective in treating HIV-positive patients. He invented the “self-recovery cone”, patented by the World Health Organization (WHO), to recover blood during hemorrhages and re-inserting it to patients. Indeed, the WHO often invites him to lecture in Geneva on a special form of ulcer, considering him a world expert on the topic. Surgeon, hepatologist, internist and educator: despite his busy schedule, Brother Fiorenzo has also been tireless in transmitting his renowned surgical skills to his African colleagues at the University of Lomé (Togo) and Parakou (Benin). It’s no wonder, that among several international recognitions, Brother Fiorenzo was also awarded the French Legion of Honor. And still the missionary and surgeon has lost none of the humility and affability that drove him to become a missionary in Africa in the first place. 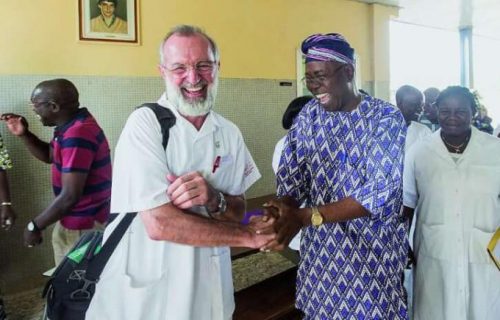 After 12 hours spent in an operating room, Brother Fiorenzo was finally free to talk to us: “Being a surgeon in Africa is an incredible experience. We live between the gratification for the lives we manage to save and the despair for situations where we can’t do anything – and which could have had a different outcome, had we managed to act sooner, or if we were operating in a Western facility.”
The Hospital’s beating heart is the pediatric ward. It’s a veritable refuge for suffering children.  The pediatrics department has room for 105 patients, but there are always 150 mothers: they place a mat on the corridor floor in order to stay close their sick children. In addition, we set up an intensive care unit with room for 23 cots for sick newborns or babies born prematurely. As we have a shortage of thermostatic cradles, Angela Sosa Gonzalez, a Colombian nurse who has lived in Tanguietà for seven years, introduced baby carriers, allowing mothers help their premature babies growing by holding them tightly against their chest. It was in fact in Bogota, Colombia that neonatologist Edgar Rey Sanabria invented the very technique of ‘marsupiotherapy’, or Kangaroo Mother Care (KMC), in 1970. Now, this ‘skin to skin contact’ treatment for premature newborns is better known as natural incubation. Studies have shown that marsupiotherapy helps premature newborns develop well both physically and psychologically. 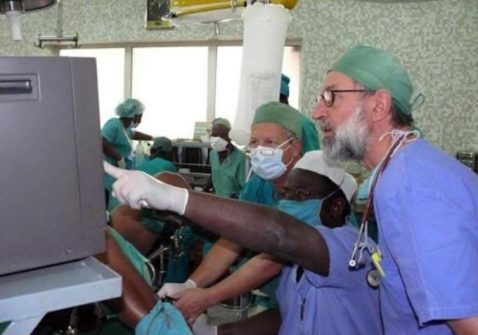 Closely linked to the Pediatrics department, is the Nutritional Centre, where children, saved from the disease, convalesce and gain back their strength. Meanwhile, the Centre offers the mothers instruction into how to make the most nutritious baby food possible. The mothers are given food supplies when they are discharged, allowing them to more easily resume their lives in the villages. Overall, the San Jean de Dieu hospital now boasts over 220 beds. The patients admitted, surgeries performed and outpatient services offered on an annual basis number in the thousands. The WHO has identified it as a model to help train healthcare teams in Benin and Burkina Faso. The Centre also functions as a graduate school for students, as a reference center for 17 dispensaries in the surrounding areas, periodically carrying out vaccination campaigns for tetanus, poliomyelitis, measles and meningitis. 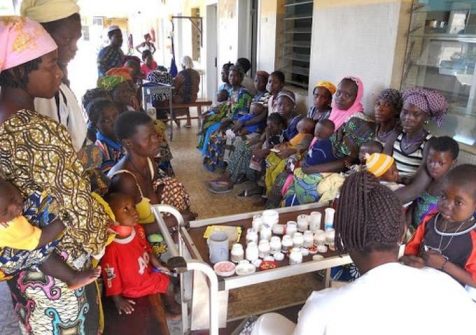 The Fatebenefratelli Order has worked for centuries in treating the sick. Its very founder, San Giovanni di Dio, built the first hospital in Granada in 1539, after becoming appalled at the reality of how the marginalized poor were left to themselves. Since then, the Fatebenefratelli’s activities have only grown. Today, the order has a presence in 13 countries in Africa, 11 in Central and South America, eight in Asia and 16 in Europe and North America. The Order can count on a total of 387 facilities with different services, including 84 are hospital centers, 59 basic health, 64 for mental disorders, 68 for the physical disabilities, 39 for the elderly and 73 for social care. In 2017, the Fatebenefratelli had a total of 38,994 beds, allowing for 1,003,210 hospitalizations.
Meanwhile, Brother Fiorenzo has just finished another operation. It is his fifth today. Still, his smile and calm impress all those who approach him, knowing that he has spent hours in the operating room in pursuit of the hope for life. (G.M.)