The region has acquired a key role in the drugs trade, becoming the major platform of intercontinental trade in cocaine, not only because of its strategic location but also because it is fertile ground for creating local groups interested in what they can gain from this commerce.

The Atlantic coast, composed of Guinea-Bissau, Guinea and, to a lesser extent, Senegal, is the main bridgehead for the drugs trade in the region. The narcotics, despatched to Guinea-Bissau from South America by sea or air, are redirected both to the surrounding international airports (Dakar, Conakry and Bamako) from where it is sent to Europe, and overland to the north of Mali where it joins with the Sahel route. This route follows the borders between Mauritania, Mali, Algeria, Niger and Libya and depends on familiarity with the land on the part of the Tuareg and Tebu tribes, the main agents providing transport services or armed escorts in the region. The Sahel route is divided into two parts: the so-called ‘short route’ and the ‘long route’.
The first passes through the Malian regions of Timbuctoo and Kidal and reaches the south of Algeria where local criminal gangs operate, while the second follows an easier but longer road, passing from northern Mali to Niger, Chad, Sudan and, finally, Libya, from where it reaches the ports of Europe, mainly in Spain and Italy. 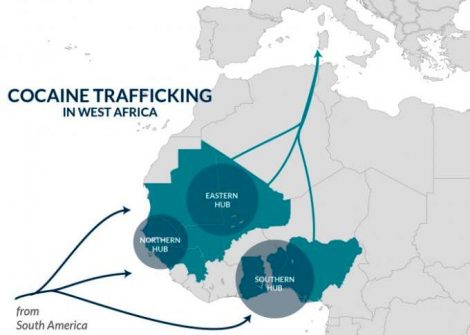 Data provided by the INCB give us to understand that the problem of drugs is becoming very serious in Western Africa. In that area, in recent years, there has been an exponential increase in the consumption of narcotics, especially among young people. This phenomenon is due to the fact that this geographical area represents the main sorting-house for the transit of the routes originating in South America and bound for Europe. This trade in drugs has been increasing for years now and has already reached impressive dimensions.
For a better understanding of the importance of the phenomenon, it is useful to recall what happened in 2013 in Guinea-Bissau (a despairing nation in West Africa) through the work of the DEA which successfully carried out one of the biggest international operations ever. An agent, passing himself off as a Colombian FARC guerrilla, invited aboard his yacht José Américo Bubo Na Tchuto, former head of the Guinea Bissau army (he was later arrested and imprisoned off the coast of Cape Verde). In exchange for the protection of the drug route, the Guinean received one million dollars for every ton brought to his country from Latin America, especially from Venezuela and Colombia. This episode shows how Guinea Bissau, one of the points on the African continent closest by sea to the American continent, transformed itself into the first ‘Narco-State’ in Africa. It is an underdeveloped country in which the institutions are corrupt and poverty is so extreme that it is easy to corrupt just about anybody. Corruption is widely used by the drug traffickers and it is therefore no surprise if it is found that the illegal trade involves such personalities as the Chiefs of Staff of the Navy and Army.Violence and corruption have constituted the red thread of an institutional compromise which, together with military interventions, has had a devastating effect on the population. Political instability has brought about the considerable impoverishment of Guinea Bissau, together with the expansion of illegal trading.
The commonest narcotic passing through the western part of the continent is cocaine, part of which stays in the territory, helping to increase consumption, especially by the better off among young people, while the rest is sent to the European markets. 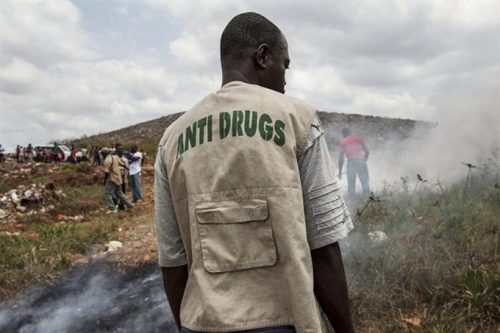 The drugs are not brought in by sea alone but also aboard commercial flights. This is demonstrated by the many confiscations carried out at the airports of Lagos (Nigeria) and Lomé (Togo).
Another country in West Africa constituting a narcotics crossroads about which we have reliable statistics regarding the increase in cocaine trafficking is Ghana. According to a leading member of UNODC, the drug trafficking organisations tend to have the drugs pass through West Africa because, hitherto, the European and United States customs authorities have been less thorough in inspecting luggage from Africa than that from Latin America. Moreover, Ghana is a large synthetic drugs producer (after Nigeria) of a type of high quality marijuana, as well as being a transit zone for the despatch of cocaine being sent to England.
With reference to synthetic drugs, we must state that, in recent years, in Western Africa there has been an increase in the production of such drugs. Many centres of production have been discovered in Ivory Coast, Guinea and Nigeria where, between 2011 and 2015, no less than ten clandestine laboratories have been dismantled.
In these centres, substances like methamphetamines are produced to be smuggled to Eastern Asia and South-East Asia. This is a new phenomenon, given that, up to a short time ago, the African region had never played an important role in this trade.
Researchers also believe that the increase in online dealing in these countries has paved the way for this phenomenon, since it is harder for the forces of law and order to identify the drug pushers and consumers. 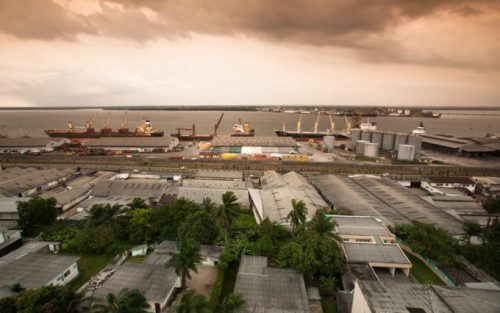 Douala is the economic capital, as well as the biggest city in Cameroon.

As regards Central Africa, we have Douala, the capital of Cameroon, which is becoming an important trafficking centre. Here, too, part of the drugs in transit is kept for local consumption and the use of synthetic drugs is widespread. In particular, we find that Kobolo is widespread among the young and iboga, containing a tryptamine which, in high doses, produces devastating hallucinogenic effects. This drug is extracted from the plant of the same name cultivated in Congo, itself also a transit country for imported drugs. In the Central African regions, among the various gangs dedicated to crime and drug trafficking, there are those who were formerly the Mai Mai militias in the Congo, as well as the Huto paramilitaries of the Interahamwe who were among the more ferocious executors of the Rwanda genocide. (F.R.)