A rebel upsurge in Eastern Congo has led to a spectacular rise of tensions between the DRC and Rwanda.
The East African Community is faced with the challenge of bringing back peace between two of its members.

Since the end of 2021, hostilities have resumed between the rebels of the Movement of the 23 March (M23) and the Armed Forces of the Democratic Republic of Congo (FARDC). The M23 which was dissolved in 2013 after it was defeated by SADC troops under UN umbrella, started again the guerrilla fight, claiming that the Congolese authorities did not honour their commitments on the demobilisation of their fighters. 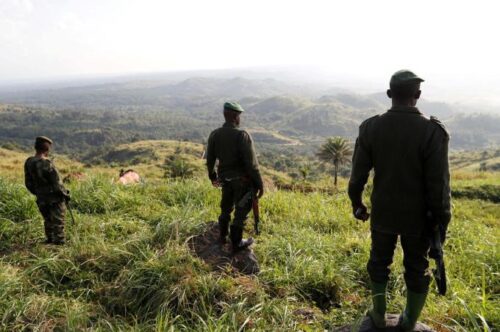 According to the M23, some of its fighters wanted to be reintegrated in the FARDC with the same rank. Others asked for an amnesty. But the Congolese authorities classified the M23 as terrorists. Patrick Muyaya, the DRC government spokesman, says that the rebels were excluded from the Nairobi peace talks initiated by the Heads of State of the East African Community to find a lasting peace in the DRC which joined the EAC on the last 29 March.
Bertrand Bisimwa, the leader of one of the M23 factions, accused Kinshasa of choosing “the military option”, instead of implementing peace measures such as the rebels’ integration into the society.
In a communiqué released by end May 2022, the M23 also accused Congolese army officers to sabotage the peace process, in order to protect their own businesses.
It is an open secret that the permanence of conflict in North Kivu allows FARDC officers to resell fuel and weapons to anybody including to armed groups, or to exploit gold or coltan mines for their own profit. 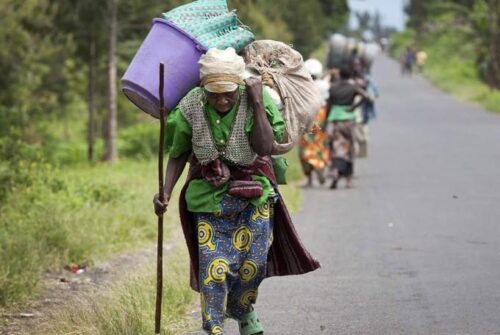 According to the UN, the clashes between the M23 and the FARDC displaced at least 75,000 people.

On the 13 June, the M23 inflicted a major defeat to the FARDC when it took over the town of Bunagana at the Ugandan border. Indeed, 137 Congolese soldiers and 37 policemen crossed the border and surrendered to the Ugandan People Defence Force, after having fled in front of the enemy, reported military sources in Kampala. After the attack, the M23 started setting up its own administration in Bunagana, which created concern in the capital of North Kivu, Goma whose one million inhabitants fear that food shortages might occur, as a consequence of the fall of Bunagana. On the 20 June, the M23 rebels reopened the border and local people began to return home. But the toll is considerable. According to the UN, the clashes between the M23 and the FARDC displaced at least 75,000 people and more than 11,000 crossed the border into Uganda.

Rwanda accused and shelled
The Kinshasa government says that Rwanda is supporting the insurrection. As a result, the bilateral relations have deteriorated considerably. On the last 28 May, the DRC government suspended all Rwand’Air flights to protest against Kigali’s alleged support to the M23. But the Rwandan Foreign Minister Vincent Biruta retorted immediately that the matter was a domestic Congolese problem since the M23 are Congolese citizens who have an issue with their own government.
The deterioration of the security situation in North Kivu is also reviving ethnic hatred across the DRC, where Congolese Tutsis say they do no longer feel safe. Civil society groups from other ethnic groups in North Kivu claim that the M23 “terrorists” are Rwandan Tutsis who are trying to disguise themselves as Congolese. 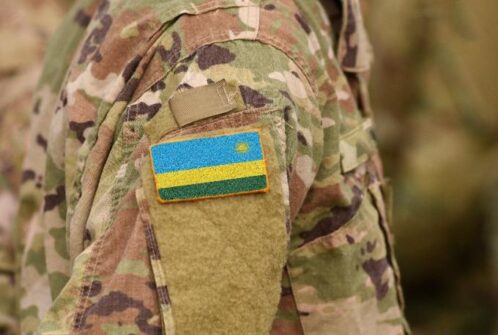 By mid-June, in Kinshasa, politicians from Felix Tshisekedi’s Union for Democracy and Social Progress (UDPS) were inciting to hatred against the Tutsis, reminding of the atmosphere prevailing in August 1998, after the rebellion of the Rwandan and Ugandan-backed Congolese Rally for Democracy had led to pogroms.
The members of a UDPS so-called “Special brigade” wearing brown shirts were filmed in the Kinshasa streets, armed with machetes searching vehicles for Rwandans. Reverends of revival churches, wearing military fatigues made speeches encouraging faithful to denounce the Tutsis. Some extra-judiciary executions were reported at Kalima, in the Maniema Province, where one alleged “Rwandan citizen” was burnt, according to a video posted from Kindu.
On the 16 June, the Goma-based think-tank Pole Institute reported that after the capture of Bunagana by the M23 rebels on the 13 June, the civil society of North Kivu organised a march of support to the FARDC in Goma. Accordingly, the demonstration turned into a pogrom against the Tutsis. Kinyarwanda speaking people, regardless of their citizenship, were attacked by the demonstrators who thew stones at them.  Tutsi shops were systematically looted. 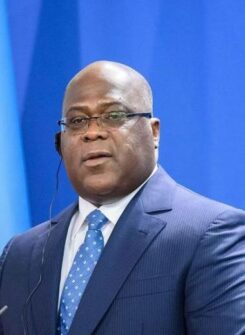 The Democratic Republic of the Congo’s President Felix Tshisekedi.

On the 17 June, President Tshisekedi urged his compatriots “to avoid the snare of xenophobia” but no sanctions against the perpetrators were decided. On the 21 June, the UN Commissioner for Human Rights, Michele Bachelet condemned in a joint statement with the UN Special Adviser on the Prevention of Genocide, Alice Nderitu, the “escalation of hate speech and incitement to discrimination, hostility or violence throughout the country” By then, the UN had already identified eight cases of hate speech and incitement to violence.
The anti-Tutsi feeling is not recent in Eastern Congo. Part of the problem is that the presence of Tutsis and Hutus inside the DRC territory is a consequence of the arbitrary borders established at the Berlin Conference of 1885, by 12 European states, the Ottoman Empire and United States. Indeed, the delineation of the borders of  King Leopold II’s Congo Free State with the German protectorate of Ruanda-Urundi, cut inside the original kingdom of Rwanda which included the territories of Masisi and Rutshuru, which now belong to the DRC.
Therefore, qualifying Hutus or Tutsis Congolese, born in these areas as foreigners is inaccurate.

Rwandan accusations
But Rwanda and its own grievances. While Kinshasa accuses Kigali of interference, on the 9 November 2021, the Rwandan Defence Force (RDF) denied that it was supporting activities of the M23. Rwanda also accused the FARDC of supporting remnants of the 1994 genocidaire army, the Democratic Forces for the Liberation of Rwanda (FDLR). 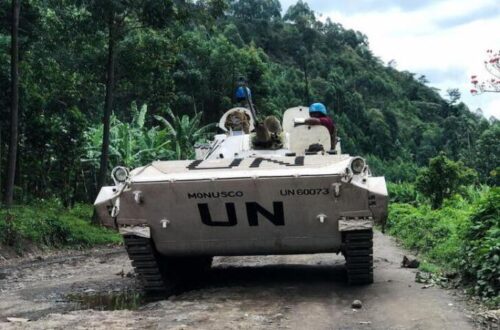 United Nations Organization Stabilization Mission in the Democratic Republic of the Congo (MONUSCO) in North Kivu.

Moreover, on the 11 June 2022, Rwanda reported shelling in Gasizi village in the Musanze District by the FARDC, while the Congolese military claimed that the RDF had sent 500 Special Forces in disguise into Congolese territory. But John Ruku-Rwabyoma, member of the Parliamentary Committee on Foreign Affairs, blames the UN Peacekeeping force in the DRC , MONUSCO and the FARDC for being
“in bed” with the FDLR.

A regional force to bring back peace in Eastern Congo
On the 19 June, President Tshisekedi called upon the international community to condemn the “invasion” of the DRC territory and to put pressure on Rwanda, in order to obtain the withdrawal of the RDF from the Congolese territory. Both countries don’t speak to each other anymore since a couple of months. They have instead communicated through mediators like President João Lourenço of Angola, chairman of the International Conference on the Great Lakes Region (ICGLR), and Congo-Brazzaville’s President Denis Sassou Nguesso.
On the 22 June, the Congolese government spokesman declared that “Rwanda was at war with the DRC” and that Kinshasa was about to break its diplomatic ties with its neighbour. But on the 24 June, President Tshisekedi said that the diplomatic path was ideal and preferred option to instore a lasting peace in Eastern DRC. 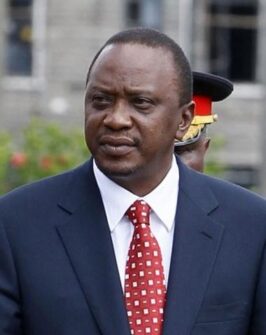 The dispute involving two EAC members, prompted its chairman, the Kenyan President, Uhuru Kenyatta to convene a regional summit in Nairobi on the 20 June 2022. The heads of state adopted a Concept of Operations, a Status of the Forces Agreement and Rules of Engagement to facilitate the operationalization of a Regional Force which should, in cooperation with the Congolese military and administrative, stabilize and secure the peace there. It should also cooperate in implementing the disarmament and demobilization of the armed groups. The final communiqué also called for an immediate ceasefire.
The EAC summit agreed that participation in the political processes of the DRC, fate of combatants during reintegration of foreign armed groups are critical issues that require urgent and durable solutions. The heads of state also emphasized that hatred speech and threats of genocide must stop. But so far there has been still a disagreement on the composition of the force. Kinshasa wanted it to be under Kenyan command and excluding Rwandan Defence Force troops. But the communiqué did not mention such demand.
Meanwhile, one of the consequences of the deterioration of the security situation in Eastern Congo is that according to Jérôme Bonso, the chairman of the Congolese National League for Free and Transparent Electins (Linelit), it will be difficult to organise on time the forthcoming presidential and parliament elections, scheduled for end 2023. Some observers believe that the tensions with Rwanda might be used by the pro-Tshisekedi side as an excuse to remain in power beyond the end of the presidential term.