Making the most populous city in the country an example of urban planning and environmental balance. To improve the quality of life for all. This is the challenge that Yvonne Aki-Sawyerr, as the Mayor of Freetown, has been undertaking for over four years. We met her.

With a Master’s degree from the London School of Economics, she worked in the UK in the financial sector. In 2014 Aki-Sawyerr returned to Sierra Leone together with an operational unit in the fight against Ebola. In 2018, with the opposition party to the current government All People’s Congress, she won the elections for mayor of the capital. 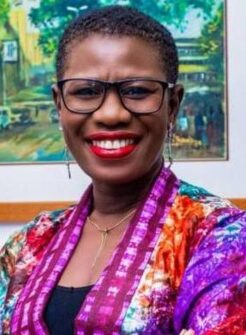 Yvonne Aki-Sawyerr. The Mayor of Freetown.

Immediately after she took office, she launched the Transform Freetown project. For Aki-Sawyerr, the Transform Freetown project tries to respond with a holistic approach, which is divided into four points: resilience, human development, a healthy city, and mobility.
A strategy that is based on public intervention, on private investments (while also seeking funds from foundations and international organizations)
and on the direct participation of the citizens.

At the heart of its political agenda is climate change. What impact does the latter have on the city and the country?
From my point of view, we must try to break down the question and try to identify the factors that lead to deforestation, the consequent loss of biodiversity and climate change.
The latter actually works like a circle. For example, the increasingly frequent irregularities of meteorological phenomena have an impact on agricultural communities, which are unable to cultivate and are forced to migrate to the urban area, in search of a better life. In the case of Freetown, this has resulted in massive deforestation of the hilly areas, where newly arrived migrants build their homes. 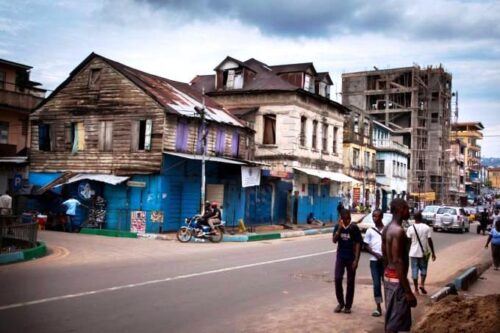 So, we see that some actions, caused by climate change, end up exacerbating climate change itself. The loss of forests and biodiversity, in fact, has an impact on the food supply chain, on the collection and availability of water and on the acceleration of natural disasters such as landslides and floods that Freetown has suffered. Another driver of deforestation is government policy. In this country, for example, a logging license was granted to a single operator and, as far as we know as citizens, it imposes no restrictions. In fact, the export of timber exceeds that of any other raw material in terms of volume. 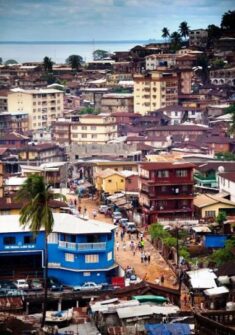 Freetown. View of the city from the university. ©robertonencini/123RF.COM

As far as environmental management is concerned, we have aimed to increase vegetation by at least 50%. Freetown the Tree Town, which aims to plant a million trees, is an initiative that is part of this goal.
Last season we planted 257,000 trees and this year we intend to plant 350,000, despite the government’s delays in providing funding from the World Bank. In addition to planting trees, it is important to make them grow and for this, we have created an application with which everyone can take care of a tree and track its growth. We rely upon community commitment and involvement.

Is it possible, regarding Freetown (which has one million inhabitants) and African cities in general, to speak of what the urban planner Henri Lefebvre called the “right to the city”?
We need to think first of all about the definition and raison d’être of this right, which is based on the premise of the city as a space of opportunity, in which you can have access to a decent home and public space. The fact that, on the contrary, we have a city that grows in an unstructured, sporadic and chaotic way, poses a challenge that makes the concept of the right to the city less applicable. 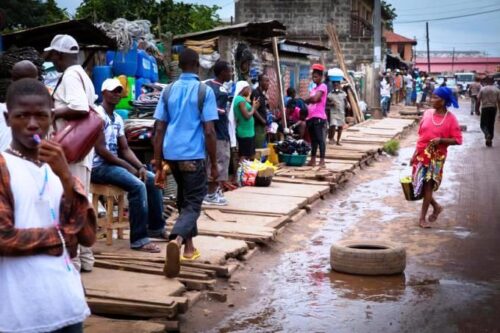 Freetown. Pedestrians at intersection to the market. ©robertonencini/123RF.COM

This is really a different concept of a city because the city Lefebvre spoke of was the consequence of a sort of urbanization that brought with it an expectation and the right to the improvement of living conditions. This is because we can only really talk about rights when we talk about values. In the context of Freetown, on the other hand, we have a situation where there is a deterioration in the quality of life, the level of economic activity and productivity, the availability and accessibility of services. We see the number of people growing, while the ability to meet that growth decreases. Therefore, it would be necessary to be able to intervene on the lack of urban planning and on the absence of the building permit scheme, essential for improving the quality of life of residents. It is precisely on these two points that the action of the City Council wants to focus. (Open Photo: Freetown.123rf.com)